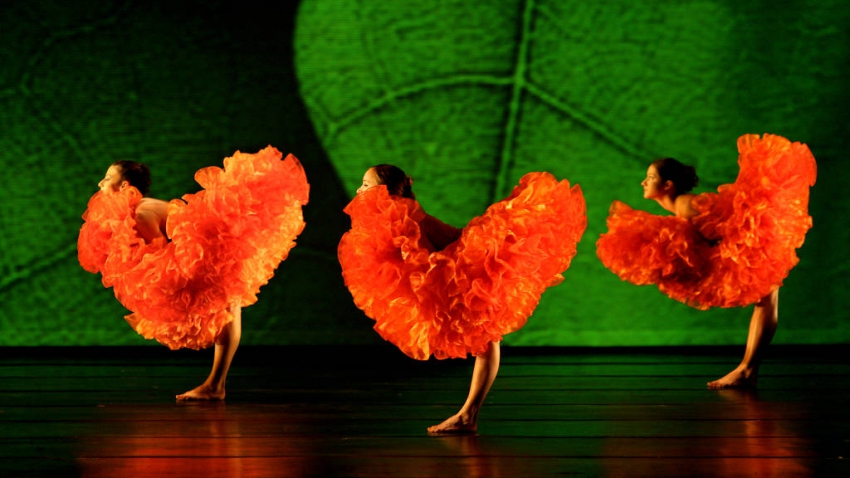 For all you aspiring stage magicians and circus artists out there, a tip from Momix dance captain Jason Williams: dazzle your audience to the max with any given routine, but then wrap it up just before people can crack the gimmick of how it’s done.

Not the sort of advice you’d expect from a classically trained and academically credentialed dancer in a pre-show talk to Vancouver’s Dance House crowd. But, then, neither is Momix exactly an old-school, “high art” dance company.

Rather, it’s a constant churn of diverse, inter-disciplinary young talents that gather together at guiding choreographic genius Moses Pendelton’s Connecticut farm. There they collaboratively concoct multi-media gee-whizzeries for film, TV, the ad industry, the festival circuit and the worldwide touring stage.

The company’s been at it for 38 years – long enough to compile a “Best of Momix“ sequence of highlights from bygone shows, which packed the Vancouver Playhouse this week as the concluding performance of the 2018-2019 Dance House season.

Each of the 16 items on the bill lived up to Williams’ bewitch’em-then-ditch’em prescription. Each piece lasted barely 5-10 minutes – just long enough for us grasp the underlying conceit and geometry of the scene, take in the lavish props and costumes, be piqued or lulled by son et lumière of the throbbing techno scores and pulsing polychrome lighting.

Some of Pendelton’s creations relied on such gadgetry as a flexing of light-studded tripods or a sinusoidal Double Dutch flipping of glow-strip ribbons. Some were show-stopping feats of sheer athleticism, like a capering trio of male pole dancers or Williams’ vaulting exaltation of a homely, clunky kitchen table. Some relied on fantastical costumes – a quintet of botanically plausible “marigolds” performing a spirited, frilly cancan, or Michael Curry unfolding a 40’ tall headdress in “Man Fan.”

To wrap up Act I, the whole company unfurled great rolls of crackling newsprint and threaded its way through a dizzying moiré of patterned projections. Then the second half of the programme featured a couple of baffling kaleidoscopic replications of luridly lit dancers that, as promised, lasted just long enough to leave us wondering where the mirrors and smoke vents were hidden.

Beau Campbell and Steven Ezra intertwined in a multi-limbed Natraj-style tableau to a vaguely Carnatic score. Williams and Heather Magee counterbalanced each other to roll an enormous, interlocking steel frame all over the stage in a giant, slo-mo game of “jacks” Most Even more beguiling was the “Narcissus” pas de deux that the troupe’s female dance captain, Jennifer Chicheportiche performed all by herself, melding with her own reflected image on a mirrored floor.

But the biggest crowd-pleasers of the evening were a pair of wickedly satiric takes on some old-school terpsichorean clichés. In “Daddy Long Leg,” a quartet of cowpokes (or gauchos?) take the stage to the strains of a smouldering tango. They’re clad in archetypical Stetsons and chaps, except under the fringed leggings each of them is fitted out with one – but only one – extra long stilt.

The magic is in the asymmetry. The lopsided prostheses can serve, by turns, as whirligig counterweights, straddled hobby horses, point-and-shoot howitzers or high-jump vaulting poles.

No prosthetics needed, though, for the show’s grand finale. Instead Momix recruited a platoon of scarecrow auxiliaries. Each human dancer was assigned a boneless, stuffed, life-sized pillow doll partner to tweak, doff, toss, wave and waggle in a parody of bravura ballet, all to the tune of a Bach allegro.

The affectless Raggedy Ann and Raggedy Andy faces made it all the funnier as the whole ensemble built up to a leaping, vaulting frenzy. I hope I’ll someday be able to hear the Brandenburg Concerto No. 2 (BMV 1047) again with a straight face.

More razzle-dazzle in store in Dance House's upcoming 2019-2020 season, announced at the Momix performance. New York's Dorrance Dance will bring its tap-dance wizardry back to the Playhouse next May, and next April flamenco diva Rocío Molina will regale aficionados at SFU's Goldcorp Centre.

Plus the edgy RUBBERBAND Dance Group of Montreal and ethnically inflected troupes ranging from Australia to Brazil to Nunavit. Judging from the 2018-2019 turnout, these shows sell-out fast; early subscriptions advised.