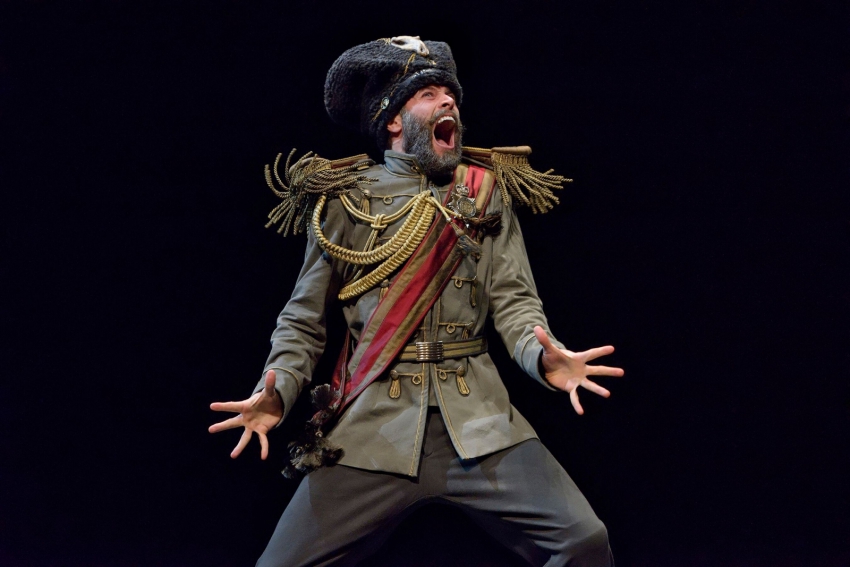 History repeats itself, as Karl Marx famously said, first as tragedy and then as farce. He got it exactly backwards, according to Crystal Pite and Jonathon Young, artistic director and writer-in-residence, respectively, of Vancouver’s cutting-edge, internationally acclaimed Kidd Pivot dance company.

Their new dance-drama Revisor, which world premieres this week at The Playhouse, starts out as a farce and then replays repeatedly with increasingly dark overtones. With each iteration, their saga of corrupt petty officialdom in a feudal Russian outback takes on more universal – and contemporaneously timely – dimensions.

Unalloyed farce was how the play’s source text, The Inspector General, first debuted in Saint Petersburg in 1836, much to the disgust of its 27-year-old author, Nikolai Gogol. He’d meant to convey “an urgent moral indictment, a religious allegory, and a portrait of the universal soul in exile,” according to Pite and Young’s program notes.

But first the farce.

Appalled as he was at the “unctuous, cloying” 19th century production, what would Gogol have made of the manic zaniness of this new version? Sound designers Owen Belton, Alessandro Juliani and Meg Roe score the show with a mixed sound-track of looped word-salad, corny orchestrations and spooky, echoing electronica.

The dancers lip-synch gobs of voiced-over Gogol dialogue while writhing and contorting in wildly exaggerated gesticulations. The Looney Toons effect is enhanced by the musical score, veering at this stage from oompah to steeplechase.

The scene opens on a gang of village kleptocrats. Costume designer Nancy Bryant fits them out in cartoon pastiche regalia: the Mayor (Doug Letheren) in braid and epaulettes, his vamp of a bride (Cindy Salgado) in an orange beehive wig and silky negligee, the jailer (Rena Narumi) in torturer’s high boots and tunic, the gossipy postmaster (Jermaine Spivey) behind an officious array of brass buttons, the Culture/Religion Minister (Ella Rothschild) in a spidery black cassock.

Their cozy little racket is thrown into a panic when word comes that an incognito Inspector (in Russian ревизор, revizor) has been dispatched from The Centre to probe the village administration. The petty despots scramble to identify and suborn this stealth auditor. In their tizzy, they fasten upon a foppish city slicker (Tiffany Trergarthen), a literal “revisor” (a low-level copy editor) who is holed up, along with his irascible valet (David Raymond), in a local doss house.

The Mayor bursts in on this bewildered fly-by-nighter and starts groveling for mercy before any accusations are even mentioned. But, as the cabal proceeds to wine, dine, bribe and seduce the young twerp, the vainglorious revisor warms to his presumptive eminence, all the while cultivating an air of august mystery.

Only when the grifters start ratting on each other does he realise that he’s in over his head. He bails out of town by express troika, but not before mailing off an exposé to an editorial acquaintance.

Rounding out the cast, there’s a black-clad ninja figure (Matthew Peacock) who weaves in and out of the action like a bunraku puppeteer, discreetly shifting articles of set designer Jay Gower Taylor’s stage furniture or, occasionally, moving the dancers themselves. A couple times, though, he steps out of the background and deploys a set of massive antlers to remind us of the underlying surrealism of the story.

In a wining-and-dining scene, he circulates as a kind of shamanistic cocktail waiter with the horns surmounting his faceless tussock-mask. And later he brandishes the antlers upside-down to crab-walk through the tableau on a pair of sinister monster claws.