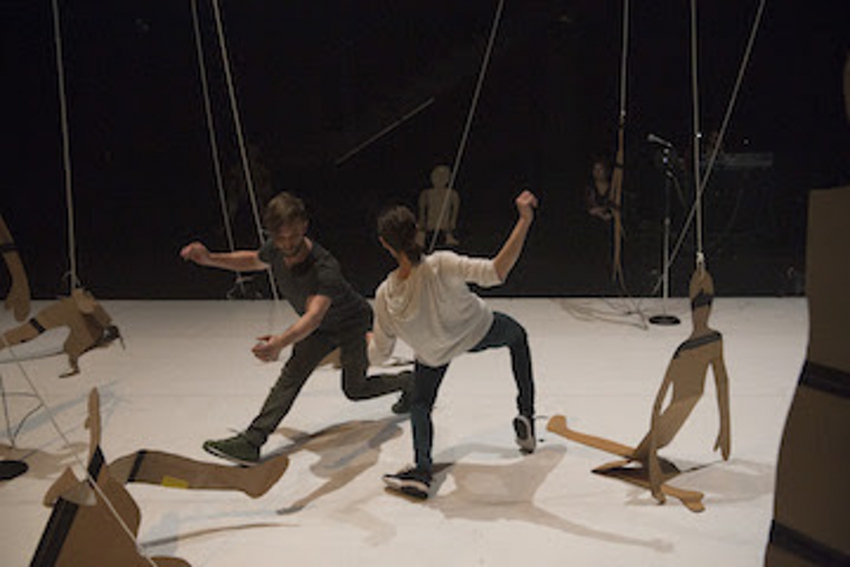 In its program notes, Vancouver’s own avant garde Plastic Orchid Factory dance collective describes its new production, I Care What You Think, as “a physical poem … that uses the body as a site for social commentary.”

I wish there were a lot more “poems”like this,  so technically adept, originally conceived, ingeniously staged and provocatively themed. Beyond the sheer aesthetics of the production, rarely does a dance performance leave you with so much to think about.

But, then again, one key take-away from ICWYT: Be careful what you wish for. Be careful, in fact, about wishing too hard for anything.

No such cautionary forebodings as you approach the show at Granville Island’s Performance Works. After all, the very title promises a tender solicitude for audience sentiment, an impression reinforced by a “wishing station” at the theatre door, where ushers invite you to jot down your any random heart’s desire on a little slip of paper for use in tonight’s performance. Every reason to expect some kind of lightsome “As You Like It” improv cabaret.

But the mood darkens as soon as you file into either of the two 20-seat rows of folding chairs that face each other on opposite sides of the open-floor stage. Amidst swirls of stage smoke, James Proudfoot’s spotlights swivel across life-size crumpled cardboard cut-out figures strewn onstage at the ends of overhead strings.

Plastic Orchid co-founder James Gnam plonkshimself at a portable turntable and plays us a vinyl LP. It sounds almost like the platter’s spinning backwards, with the release of each tone somehow preceding the attack. Nevertheless, Gnam and co-star Vanessa Goodman manage to dance us a kind of jagged, angular duet to this “music,” circling each other but never quite touching, their Nikes audibly squeaking on the plasticated hardwood gym floor.

So it’s a bit of a relief when Gnam slips off his hipster uniform of hoodie and sneakers and steps up to a floor mike to quietly, conversationally recite his own wishes, as Goodman and the show’s third co-star, Jane Osborne tug the onstage cut outs into standing positions via overhead pulleys. Gnam’s wish-list is pretty relatable stuff, from the blandly idealistic (“I wish I told my people more often that I loved them”) to the trivially mundane (“I wish I understood ‘offside’ in soccer”).

But, after the first iteration, he cycles through the same list again. And again, and again, each time with increasing velocity and volume. He winds up shouting and flailing his wishes with a fervor wholly out of line with their anodyne content. And Osborne squares off against him with an equally vehement – and equally prosaic – list of her own. They hurl violent wishes at each other until they collapse in exhaustion onto the stage.

Whereupon Goodman takes centre stage, right in between the gasping, sweat-slicked remnants of her two co-stars, to execute an exquisitely poised and studiedly halting solo tour de force to the tune of Debussy’s Claire de Lune. Her voiceover ruminates on the fleeting blessing of “perfect dance” that catches you in unselfconscious solitude, when you’re so in-the-groove that your shortfalls no longer matter.

It doesn’t last long, though, before the score reverts to keening, thrumming or wailing electronica. The performers pair off in serried twosome permutations, never quite touching but darting in synchrony, like schooling fish, while the third co-star circles the stage working the pulleys until all the cut-outs have levitated up into the rigging.

Goodman brings out the pre-show “wishing station” box of audience jottings and reads out some of the scribbled desiderata, ranging from the sublime (“World Peace”) to the flippant (“I wish fried chicken were a health food”). The floor fills up with crumpled wish-chits as her recitation picks up pace and stridency.

Gnam and Osborne whirl about the stage gathering whole quiffs of the pulley-hoist ropes at a time until they look like circus balloon vendors. The cut outs twitch and writhe overhead. Then they let go all at once, leaving Gnam entangled in cordage and Osborne buried in a clatter of crumpled cut outs. Proudfoot projects the show’s title onto the stage in a scrolling white-on-black headline font, except now it somehow rings more like a sardonic shrug – “I care what you think?!?” – than an expression of solicitude.

The show runs through Sunday at Performance Works. Thought provoking, to say the least, think what you will of it. Here’s wishing them receptive audiences for this and the remaining six programs in their 2019-2020 season.