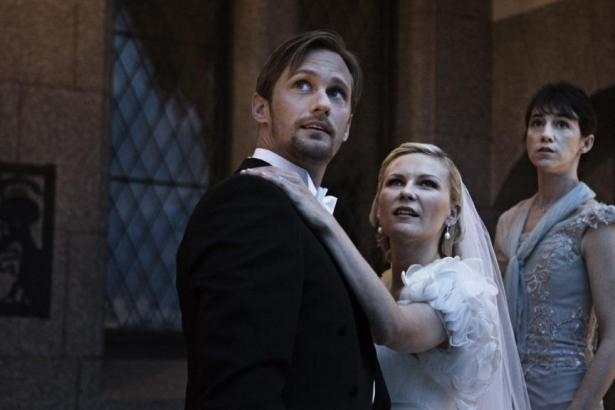 Director Lars Von Trier is a habitual divider of opinion. Every movie he makes seems to be blasted on one hand, praised and revered on the other. He's the dark knight from Denmark. Melancholia is no different. Although slightly more accessible than previous efforts such as Dogville (2003) and Antichrist (2009), this movie has already divided opinion and will probably continue to do so.

But go with it, it has many great and curious moments. It's a glossy thinker; sexy, trashy, throwaway and meaningful.

The movie follows Justine (Kirsten Dunst) and her sister Claire (Charlotte Gainsbourg) through Justine's wedding and the ensuing world wide Armageddon. The sisters are joined by their husbands; the newly married Michael (Alexander Skarsgard) and the grumpy, finance-fixated John (Keifer Sutherland).

Melancholia opens piece by piece, and despite sweet moments, we can see that all is not well with the marriage, with the family, with anything connected to these people we are meeting. But as one character says, 'enjoy it while it lasts'.

The movie is split into two parts. Part one is all about Justine, while part two covers Claire. But essentially, Justine is the dominant character throughout. In the course of the movie, Justine urinates on a golf course, has wild sex in a sand trap, and explodes and reloads in many other ways worth watching.

In fact, you never quite know what she's going to do next. She looks beautiful to the point of ravishing, while at other times she appears ruined and sandbagged. The movie is in part about depression and the roller coaster of feelings and actions involved with it. Dunst's delivery make this visible to viewer. It's the kind of rock-n-roll performance that she's becoming quite good at. Ballsy, spiteful, snappy and cheeky. It's feminine in an underlying masculine way.

Melancholia is not so much as left field, but more of a boomerang. Just when you think it's getting away from you, it comes back. Just when you think it's falling into a genre convention, it flips out on you. Every time the art movie script and stylings appear, it is whipped back into the shadows. Every time the movie bares its teeth and becomes more aggressive and brash, it is forced to retreat into a softer centre. It gives, it takes, it screws, it folds.

These traits make it surprisingly funny in parts. The comedy in this film is often hidden and at times you have to be quick in order to grab it and catch it. Look out for John Hurt in a small but attention grabbing role, while an extra special mention should go to Udo Kier for a subtle and surreal comedic performance in what effectively amounts to a cameo as the wedding planner.

In closing, Melancholia is a chemistry set filled with many strange elements. It's sexy, destructive, and works the mind. Sometimes that's exactly what you're looking for.

Melancholia is released on DVD and Blu-Ray on March 13.