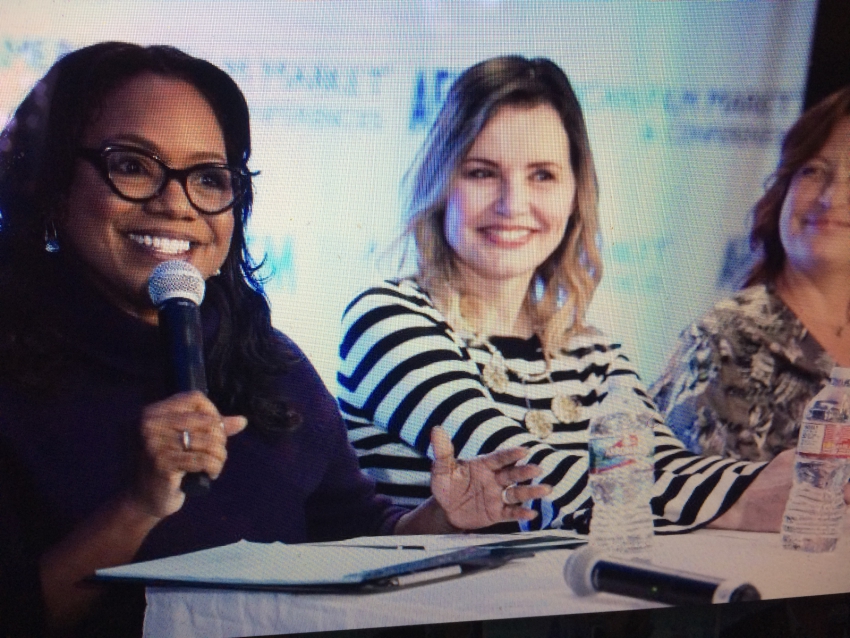 Each year from October 31 to November 9, over 7,000 international industry professionals convene in Santa Monica, CA for a week of meetings, pitches, panels and networking.  Last year, the AFM presented a panel honouring women directors, entitled Women are the Future, featuring actress and activist, Geena Davis (The Fly, Beetlejuice, The Accidental Tourist, Thelma & Louise, A League of Their Own, The Long Kiss Goodnight, and Stuart Little), director Neema Barnette (Queen Sugar, Being Mary Jane), director Jen McGowan (Kelly and Cal, Rust Creek, Hairstyles of the Damned), producers Jim Whitaker and Catherine Hand, (A Wrinkle in Time), and moderator and writer/producer, Wendy Calhoun (Empire, Justified). The panel not only sold out, but so many people stood in line that over half of them had to watch the event from the television screens in the lobby of Loews Hotel.

I asked Kate Rees Davies (Aberration, Babes with Attitude), director and organizer of last years' panel, if she thought the film industry was making progress in inclusion and diversity.

“In spite of the fact that Patty Jenkins came out with Wonder Woman, which did so well at the box office, and that Cathy Yan will direct the next Harley Quinn film for Warner Bros.,” Davies said. “The statistics reported by USC’s Annenberg Report, for 2018, are grim, listing only 43 women directors out of 1100 popular films. Of main characters or co leads, only 33% are female. And yet, audiences are desperate for diversity.” I asked her if she had an answer to this pervasive problem. “Only if A-list talent to refuse to work unless there’s a female director and/or white males come on board with us, will people get hired. This is a way that imbalances can be solved. It’s very important to keep talking, to look for solutions for equality across the board.”

“In the meantime,” Davies spoke candidly, “I look forward to the day when I’m spending my time doing my work, not fighting to do it.”

Last year's panel, Women are the Future, can be viewed at the following link: