Through the Keyhole with Canadian filmmaker Guy Maddin

An interview with Canadian filmmaker Guy Maddin about his latest film, his cinematic influences and his creative process. 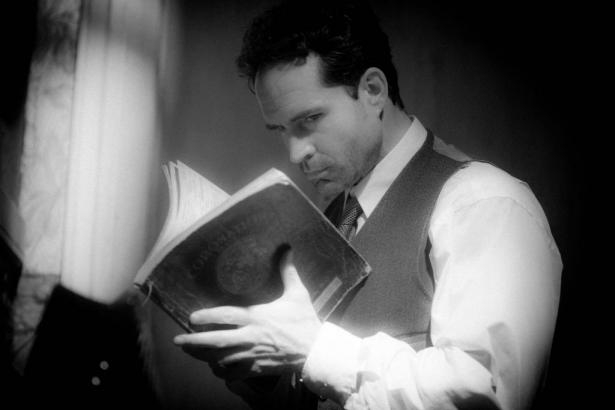 Guy Maddin is one of those filmmakers who fails to fit into any conventional category. Films such as My Winnipeg (2007), Brand Upon the Brain (2006), and The Saddest Music in the World (2002), along with countless other short films -- most of which are shot on location in his native Winnipeg -- are often populated by bizarre characters, oddly-compelling scenarios, strange actions, crude reactions, and on some occasions, moments that make you go 'huh?' in the night.

Listen to the interview:

Maddin's latest film, Keyhole, is filled with gangsters, ghouls and armfuls of mystery. Shot in black and white within the confines of Winnipeg, Keyhole proves that for Maddin, genre definitions are not to be seriously adhered to.

“I cheated the genre,” said Maddin, speaking to The Vancouver Observer from a studio in Toronto. “I claim it's a gangster meets ghost story, but the ghosts aren't scary and the gangsters throw all their guns away!”

Keyhole is the story of Ulysses Pick (played by Jason Patric), who arrives home after a prolonged absence carrying with him the body of a teenage girl. Meanwhile, the remainders of Pick's gang are anxiously waiting for him inside the house, experiencing the ghouls and ghosts that currently inhabit it.

“I liked that dark and sinister world of the gangsters as a setting,” said Maddin. “Where things can turn on a dime and the emotional state change all the time.”

Perversely, it isn't crime on Ulysses' mind -- it's his journey through the house to reach his wife Hyacinth (Isabella Rossellini) in their bedroom upstairs. Throughout his odyssey, Ulysses encounters many memories and mementos, each one littered with supernatural flotsam and jetsam.

“I always enjoyed ghost stories and monster movies,” Maddin explained. “So I thought it might be nice to use some of those childhood vocabularies in a movie. But to me the real ghosts are regrets, melancholy, anger over insults dealt your way years earlier.”

In many ways, Maddin is a one-man carnival of the weird. Like David Lynch, who Maddin has often been compared to, Maddin has a sound mastery of the 'delayed reaction'. In other words, creating something that can appear terrifying on screen one minute, but will have the audience howling with laughter a few hours later on their way home from the theatre. Or vice versa, as the case can often be.

As with many artists and film makers, their influences appear from strands far and wide, and are often quite personal or personally acquired. For Maddin, see the terms 'Experimental movies', 'European influences', and on many occasions, childhood memories of Winnipeg. But Maddin also takes delight in drawing from areas such as dreams or literature in order to find the right effect.

“I see it as a challenge to take bookish effects and use them in movies,” he said. “The kind of tingles you get from a metaphor, or something worded just right on a page. Even though I'm doomed to failure 99% of the time, I'm kind of curious to see the results.”

Maddin's films share a similar feel to those made in Hollywood's early-talkie era, including occasional dabs of burlesque and other back-street nocturnal adventures. One directorial comparison with Maddin's work can be made with Charles Laughton's surreal, macabre, and dreamlike 'The Night of the Hunter', starring Robert Mitchum.

Containing a strange and at times, brutal power and fury, dreams are an important factor in the creative process that have often been acknowledged or used as a subject matter for movies and artists alike. In this respect, Guy Maddin is no different; although he's readily free to admit where the root of some of his ideas stem from.

“The way we feel about things gets to be experienced in an un-inhibited fashion when we're dreaming,” said Maddin. “If we're lucky we're able to seize the person we lust after, punch the person we hate, or just cry if we feel like it. I just try to steal that randomly delivered power and stick it on a screen somehow. Dreams are always worth paying attention to.”

Keyhole is released on DVD/Blu-Ray on 24 July via Entertainment One Media.