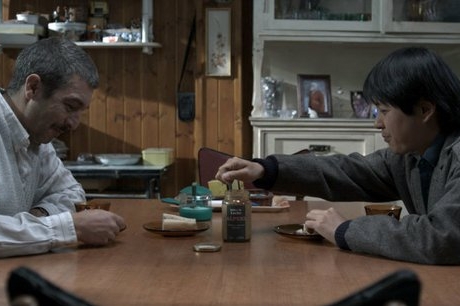 The Vancouver Latin American Film Festival (VLAFF) celebrates its 10th year (August 31- September 9th) not only marking a milestone, also its growth through the years bringing an array of selected, award winning Latin American film to satisfy cinephiles in Vancouver and also to serve as an "educational window" between film and local audiences.

As part of the celebrations, VLAFF has launched the 10th Anniversary Award for first time directors. Other competitions include the Al- Jazeera Best Documentary and Best Short film, both in their second year.

Opening night : Juan de los muertos (JUAN OF THE DEAD) , Cuba-Spain. Director: Alejandro Brugués. Said to be the first Cuban zombie-themed film, a tale of fiction set at the time of the 50th anniversary of the Cuban Revolution. A group of flesh-eating zombies attack the island. The media reports they are dissidents paid by the U.S., but some are not too sure. That's when Juan of the Death -- whose catchy phrasy is "we will kill your beloved ones" --comes to the rescue, fighting the undead while making money on the side.

Closing Gala: Un cuento chino (A Chinese Tale), Argentina. Director: Sebastián Borensztein. This dark-humored, hilarious, light-hearted drama opens with a cow falling from the sky causing a tragedy in China. In Buenos Aires, a hardware store owner Roberto (exceptional performance by Ricardo Darín, The Secret of Your Eyes) a hermit and cranky middle-age Malvinas war veteran who likes to collect odd news from newspapers, comes in the aid of a lost young Chinese man, Jun (great interpretation by Huang Sheng Huang)who can't speak an iota of Spanish. Jun is looking for his uncle, his only relative. Forced by circumstances, Roberto becomes his custodian while searching for Jun's uncle. Goya 2011 winner Best Ibero-American Film. (September 9th, Granville 7)

Spotlight on Argentine Cinema: The program includes a showcase of emerging filmmakers as well a retrospective for acclaimed team: filmmakers Mariano Cohn and Gastón Duprat and screenwriter Andres Drupat and their films "El hombre de a lado" (VLAFF 2011's The Man Next Door),Querida voy comprar cigarrillos y vuelvo (Darling, I’m going out for cigarettes and will be right back). Civilizacion, directed by Rubén Guzmán, produced by Mariano Cohn and Gastóm Drupat, written by Andrés Duprat wil be also showcased during the restrospective.

It will also include an homage to the Argentina’s National School of Cinematographic Experimentation and Filmmaking (ENERC, for its acronym in Spanish) with the screening of 11 short films by former students during the days in school, now celebrated directors.

Latin Queer Cinema: GLTB-oriented films have been part VLAFF's repertoire in previous years,now they will have their own section in the festival catalogue.

Other films to watch:

Joven y alocada (Young and Wild), Chile. Director: Marialy Rivas. A fresh narrative on the trial and tribulations of Daniela, a 17-year old who finds herself at lost between her ranging libido and growing up in a evangelic home. The teenager finds escape through her racy blog, where she connects with like-minded young people.