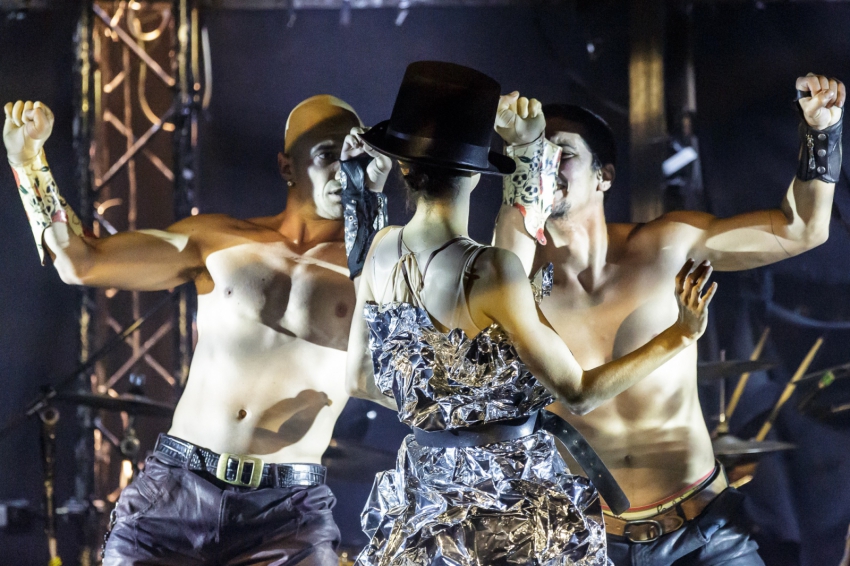 Watching Israeli group, Maria Kong, make their North American debut with the electric “Backstage,” is so breathtaking, it makes you wonder why they haven't premiered long ago in Canada.

The dance show for opening night of the 15th Annual Chutzpah! Festival was everything all at once: dance, live rock concert, theatre, movement, video art and technology. Although the performance was held at 19+ Red Room Ultra Bar, people of various ages sat crossed-legged on the venue’s “dance floor” as a performer started sang nautical tunes while strumming his electric guitar.

The group, based in Tel Aviv, includes an international team of six dancers and numerous musician, as well as  art and technology specialists. Maria Kong has performed in the Middle East, Asia, South America, India and Europe, to high critical acclaim and it's not hard to see why.

"Backstage" really captured the viewers' attention when mysterious and metallic host ‘Shadow Lady’ set the tone for upcoming sea-themed journey for the night filled with sirens and pirates. She gave an auto-tuned, futuristic prelude before pointing to the back of the room where a riveting dance performance was held by three ‘sirens.’

Immediately after the show began, performers made it clear that this show was not meant for a passive audience. Every few minutes, the enthusiastic viewers were ushered to a different part of the venue to view a series of differing performances, including dance-offs and acoustic singing presentations.

Audience members experienced the benefits of being in a relaxed, intimate atmosphere with a beer or cocktail in hand. No matter where you were, you always had a front seat and were within arms' reach of the artists during moments of the performances within the show.

Without giving too much away, the crowd was gathered near the end for a mini-rock concert. The performers pulled the audience together for some dancing. A few minutes in, the scene easily resembled a smaller scale version of the mosh pit at Rogers Arena during a concert. Soon after, the pit seamlessly cleared and transitioned back into performance mode. This effortless movement was a recurring theme (along with the themes of the sea, age, love and time) throughout the show.

The word “experimental” was thrown around among viewers a few times throughout the 70-minute piece. This interactive, fully immersed performance is the perfect antidote for those who hate being strapped to a seat or for those bored enough to text during shows. Another plus is that guests are welcome to stay and dance at the Richards street venue afterwards.

This unexpected experience sets the bar high for other dance shows and leaves the locals wanting more. Hopefully, this distinctive show is a preview of what’s to come for the following days of the festival as well as the dance culture in Vancouver.

"Backstage" is on again Saturday at 8 p.m. and Sunday at 4 p.m. and 8 p.m. Organized by Mary-Louise Albert, The Chutzpah! Festival continues until March 15. Click here for more details.

UPDATE: Lesley Gore, who died today at 68, remembered in 2012 video with Sia and Lena Dunham