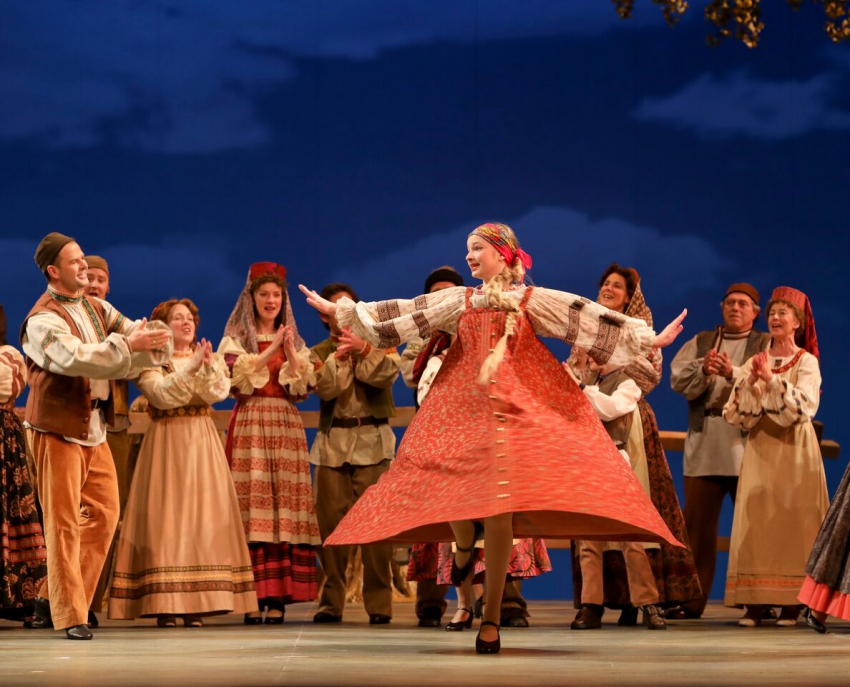 Like Russian Zavarka tea, Tchaikovsky’s Eugene Onegin, the consummate Russian grand opera, is an immersive experience: strong and dark, with a dollop of sweet jam to smooth its bitter edge.

In director Tom Diamond’s new production for the Vancouver Opera (V.O.), it’s served up in a grandiose setting as ornate as an heirloom copper samovar. If you’re new to the Russian repertoire, no need to overthink it. Just savour Onegin like a deluxe cup of tea, revelling in the lush melodies, rich orchestration, top-flight performances, intricate choreography and lavish sets.

At the opening matinee, though, I couldn’t help noticing that the English surtitles seemed rather curt, compared with the mellifluous tetrameters sung onstage. My seatmate, UBC history professor Alexei Kojevnikov, confirmed that the translations were drastic abbreviations of the original Russian libretto, which Tchaikovsky borrowed from his source text, Alexander Pushkin’s 1833 verse novel of the same name.

That slender, 100-page volume not only broke new ground in Russian poetics and set the tone for Russian romanticism. It also introduced, in its title character, a new literary archetype, the “superfluous man,” a peculiarly sociopathic Russian variant of the Byronic hero.

Rich, idle, sexually alluring but coolly stand-offish, the species homo supervacuum (or, in Russian, лишний человек) seems motivated mainly by anomie and self-regard. Driven by these wan little twin demons, Onegin forsakes the “boring” capitol for the novelty of rustication on his inherited country estate.

There he annexes an acolyte, the puppyish young poet Lensky, who in turn introduces him to his fiancée, buxom young Olga. Which is how Olga’s dreamy, neurasthenic elder sister, Tatyana, first lays eyes on Onegin. She’s instantly so smitten that she sits up all night penning an ardent declaration of love, only to be priggishly rebuffed by the cold light of day.

To make matters worse, at Tatyana’s name-day ball, Onegin goes on to foment a jealous quarrel with Lensky. Almost inadvertently he winds up killing the young poet in a duel. Seems like a good time to absent himself from the countryside and from Russia altogether; he goes on a decade-long grand tour abroad.

But when that, too, begins to pall, he returns to dabble once again in the social whirl of Saint Petersburg. His senior friend, the old war hero Prince Gremin, invites him to a glittering soiree. Our jaded человек, typically, pronounces himself “bored” – at least until the Prince’s young and dazzling new bride makes her grand entrance.

Onegin is stunned to recognize her as Tatyana, the same country girl he’d spurned some 10 years ago. Now that she’s morphed into the gracious cynosure of the capitol’s haute monde, he suddenly realizes he can’t live another day without her.

Forcing his way into her chamber, he proclaims his newfound passion and his readiness to elope. She admits to some residual frisson of her old attraction for him, but their time is past and she’s honour bound in marriage. She breaks free, leaving him alone in the boudoir, superfluous indeed.

For Pushkin, the romantic idealist and social critic, the decadent Onegin must have been the central figure of the novel. But Tchaikovsky, writing more than 40 years later, shifts the focus onto Tatyana, the “collateral damage” of Onegin’s narcissism.

Her experience – painfully recognizing and confessing an off-script passion, only to be humiliatingly rejected – may have been all-too-recognizable to Tchaikovsky. At the time he was scoring Onegin, the composer had just entered into an excruciating cover-up marriage to wish away his homosexuality.

So Tatyana gets all the best scenes, and Russian diva Svetlana Aksenova rises to the occasion in her V.O. debut. Her vocal virtuosity is matched by her acting chops. In the famous Letter Scene in Act I she achieves a miraculous counterpoise of fire and vulnerability.

Konstantin Shushakov brings a supple baritone to the title role, but has much less scope for acting. He’s a stiff, after all – it’s Onegin’s defining trait, but hardly likely to galvanize a full house QE audience. Perhaps in an bid to humanize the character, lighting designer Harry Frehner and set designer Scott Reid decided to serve up gigantic screen projections of Shushakov’s face, emoting, after each scene.

Well, they needed to project something onto the proscenium scrim for us to look at during the lengthy interludes while they swapped out (with an audible clangour of stage carpentry) the elaborate stage sets for all seven of the opera’s scenes.

The entr’acte waits were worth it, though, unfurling rich scenic backdrops for movement director Tamara Celiubeeva’s kaleidoscopic dance tableaux and Nicholas Harrison’s tense fight choreography. Tchaikovsky is above all a ballet composer, as amply evinced in both the ballroom and the peasant scenes this opera.

Conductor John Darlington brought out the best from the V.O. orchestra for these grandiose tableaux, but also proved adept at the more nuanced, psychological ensemble pieces where supporting players voiced their contrasting emotions in duets and trios.

Amidst so many Russians, three Canadian mezzo’s rounded out the cast: Leah Giselle Field and Megan Latham were endearingly fluttery as Tatyana’s mother and nanny, respectively, while Carolyn Sproule played an insouciant Olga. Tenor Alexei Dolgov, as Lensky, provided an impetuous counterfoil, while Georgian basso Goderdzi Janelidze’s touching Act III aria in praise of his young bride made Onegin’s proposed elopement seem all the more caddish.

So when Tatyana, after a build-up of tension in the final boudoir scene, manages at last to wrest free and slam the door on her лишний человек, the whole audience heaved an almost audible sigh of relief. As the current hashtag might have it, #Time’sUp, Eugene.