“11” Questions for Ghosts of Wars Past

Like Paula Jardine’s A Night of All Souls, Mark Haney’s “11’ for brass ensemble, about the Renfrew Heights Veterans Housing Project, brings people together in open dialogue about death and through it a renewed respect for the courage of life. 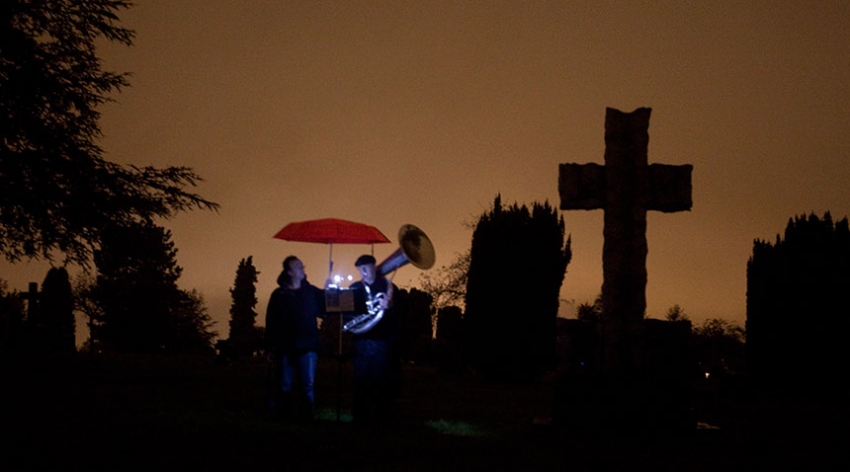 It was a dark and stormy night...

It was a dark and stormy night…but that wasn’t enough to stop Mark Haney’s brass players from strapping on their rain gear and heading into Mountain View Cemetery for this year’s A Night of All Souls ceremony.

Mark was following a thread similar to Paula Jardine (creator of A Night of All Souls), which is to bring people together in open respect and dialogue about death and the dead. And with this being the centenary of the First World War, Mark Haney’s “11” is also helping to shed light onto a Vancouver neighbourhood touched by war—and maybe even heal some ancient wounds.

When I asked Mark, a professional double bass player by trade, how he came to be writing music in a field so far removed from his occupation, he started by describing his years as a commercial musician “just gigging and trying to make a living”. He alluded to a few professional disappointments that prompted him to question his core purpose as a musician. He concluded that what he needed to do the kind of projects that he loves—the ones that fascinate him most—even if the money wasn’t there. Then one night in 2000 at the bar at the Banff Centre for the Arts, the famed double bassist Edgar Meyer bottom lined it for him: “If you wanna write, you gotta play; if you wanna play, you gotta write”. Mark knew he had to start creating his own music. 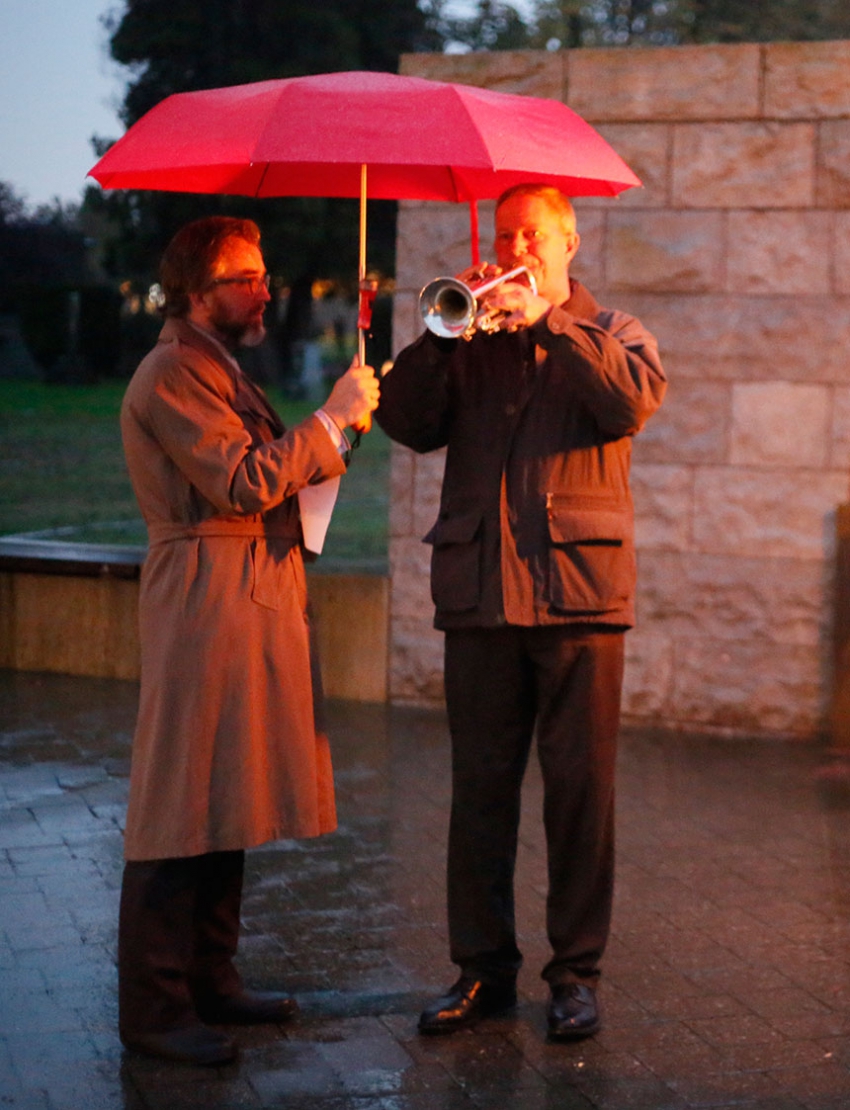 Mark Haney shields a fellow musician from the elements at last Saturday’s A Night of All Souls. Photo courtesy Tim Matheson

Two years ago, Mark approached the Parks Board for an artist studio residency at the former caretaker’s suite in East Vancouver’s Falaise Park. The field house stands not far from the Renfrew Heights Veterans Housing Project, a neighbourhood with a unique history that would become his focus for writing and telling important community stories. 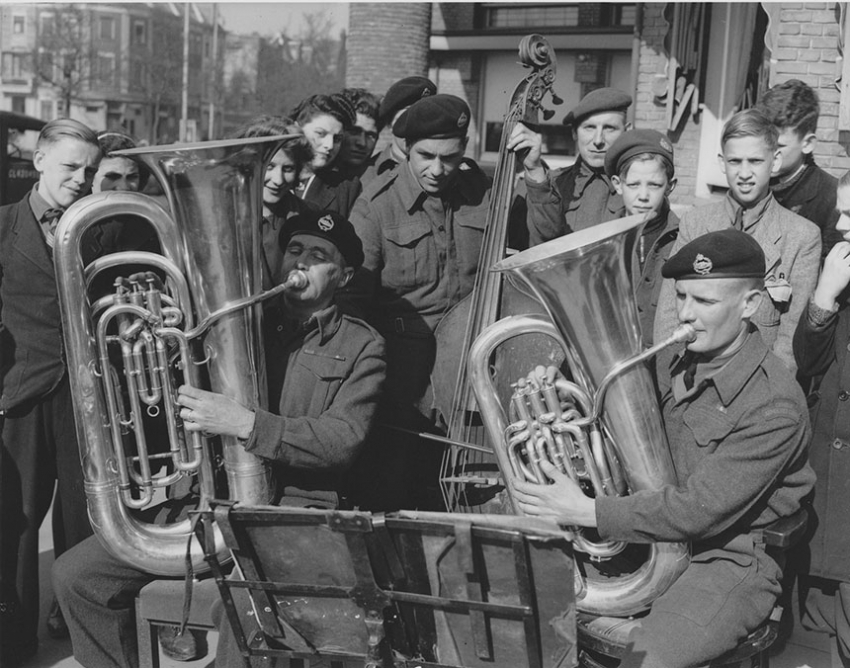 Among the many materials Mark Haney and fellow researcher Diane Park uncovered at the National Archives was this one featuring wartime musicians, including Mark’s Doppelgänger on double bass, flanked by tubas. Photo courtesy Library and Archives Canada.

As Mark began his research, he was shocked to discover how much he didn’t know about the Second World War. “It’s not like the Hollywood war films at all”, he said, “There were no tours of duty­—most men were in the war for four or five years.” He described the scene of D-Day in which they “turned people into cannonballs” driving them up onto the beaches of Normandy even as their comrades around them were mowed down. In preparation, soldiers trained for months on the beaches of England to “head inland no matter what.” “You can’t fail”, was the drill and “You don’t help anyone. Period. Get inland.”

After the war, many veterans returned to Vancouver suffering from what today would be diagnosed as Post Traumatic Stress Disorder. They bought homes in the Renfrew Heights Veterans Housing Project, but with no support other than similarly traumatised veterans, problems began. “It was a tough neighbourhood”, said Mark describing the problems, which included physical abuse and alcohol, as the veterans tried to lead normal lives. But, feeling more and more isolated from mainstream society, the veterans retreated into their homes and the local Legion Hall. Many of their children bear the scars of a war fought before they were born. 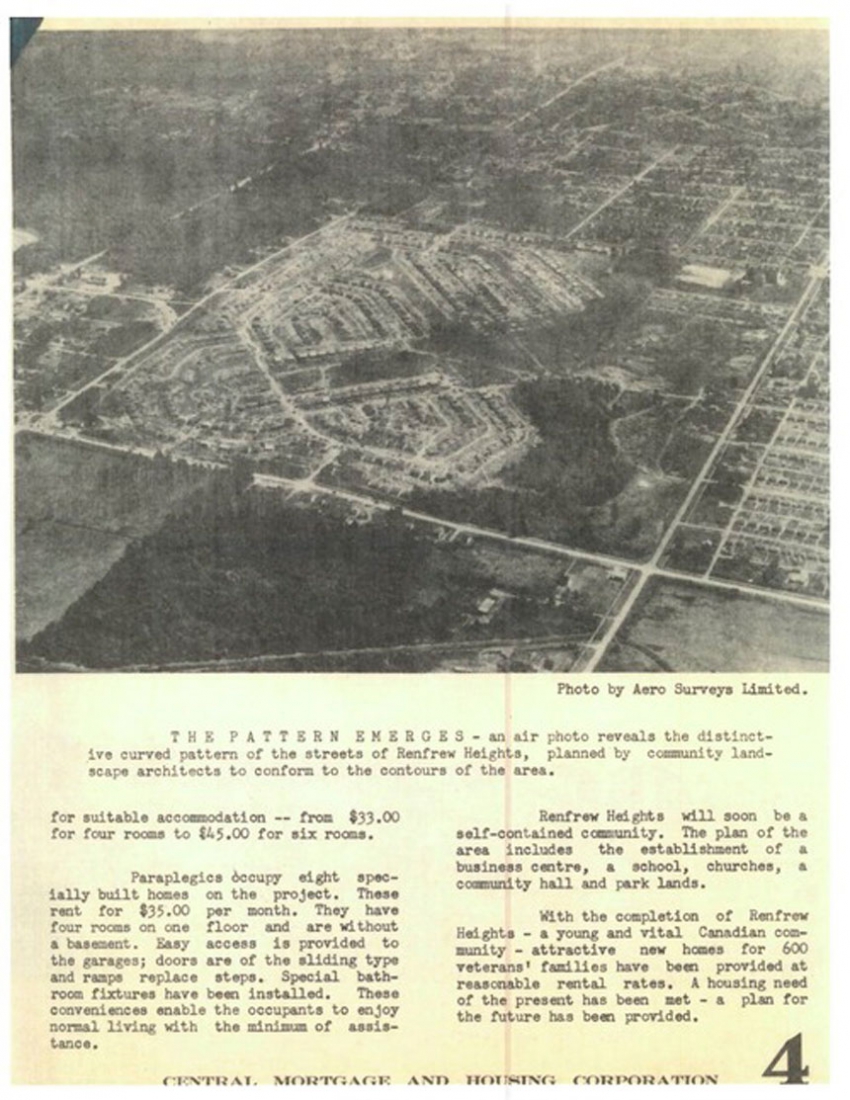 Mark realised that the stories of these veterans and their families needed to be told. "It’s a living history we’re about to lose", speaking of the veterans but also the Project kids, now in their 60’s. But to tell their stories, he first had to earn their trust.

What is your name?

As a gigging musician Mark knew how to put on a show, but the last thing the veterans needed was a showman. The veterans had had a lifetime of training at being shut down, so their first inclination was to close ranks. “What’s your agenda?”, they’d ask, “Who are you?” and “What do you want?”, they’d demand. 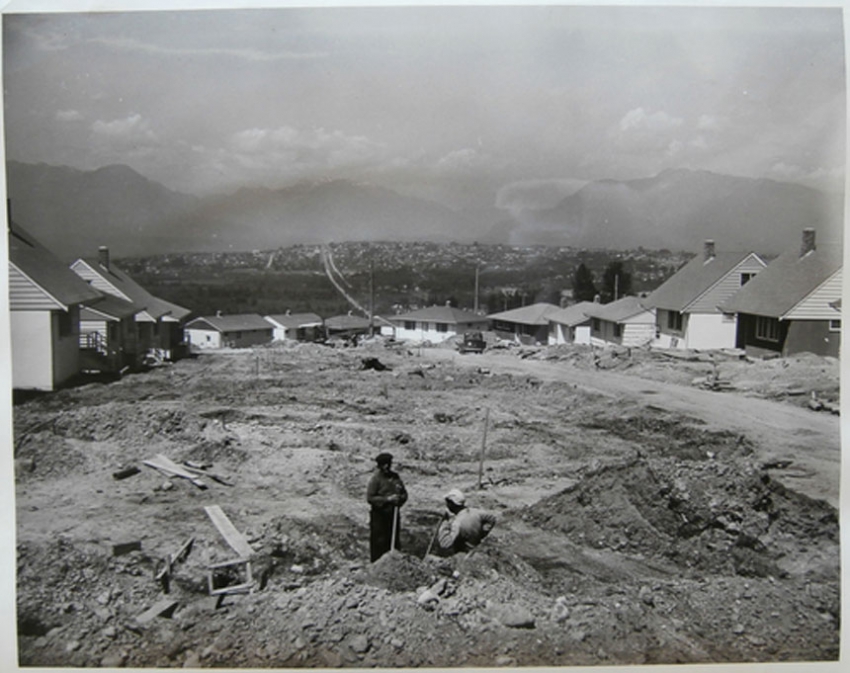 Marketed to veteran’s as a "working man's Shaughnessy" the houses were actually tiny. Construction of the Renfrew Heights Veteran’s Housing Project in 1948. Photo courtesy Library and Archive of Canada