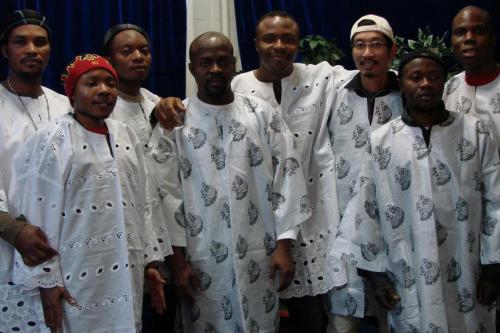 Heros Band of BC are wearing the Dashiki, traditional Nigerian clothing

“Our songs are mainly about love, unity, peace and freedom,” says Elijah Onosemuode, lead singer about  his band, Heros Band of BC.

What you can expect is a multitude of instruments speaking to each other from the guitar, keyboard, Conga drums to the talking drum and of course the lead singer.

Linguistic diversity is a microcosm of Africa as a whole. The major languages spoken in Nigeria are English, Hausa, Igbo, and Yoruba as well as Fulfulde, Kanuri, and Ibibio. However, the number of languages catalogued in Nigeria is estimated at 521.

“We sing in Yoruba, Igbo, Hausa, Urhobo and Rivers language. Hero’s Band of BC unites musicians from all parts of Africa: Fiji, Togo, West Africa and Congo. We’ll try to bring in a player from Uganda and Ghana.” Elijah mentions that the band does not constitute just musicians from Africa. A multicultural appeal is their appeal.

Elijah felt the need to absorb Canada’s multicultural pace, and as far as the music industry is concerned, wanted to make sure that the band gave their own version, to add to the dynamics and maximize differential appeal.

Coming from a family of 6, he descends from a musical lineage and took after his father during his youth in Nigeria. He has been in the music industry for over 15 years, “so back in Nigeria, we played concerts. In BC we looked at it here and thought to take this opportunity with musically inclined individuals. The knowledge of music has impacted me and I have to bring it out here to BC.”

“We use the church venue for rehearsals but we have a couple of shows soon that will be out. During the first quarter of next year maybe, we’ll make arrangements with managers in Surrey.”

Now, when it comes to the vibe emanated from this Afro-Caribbean appeal, you can pick an instrument to have your ears hone in on because this group has key African instruments to follow.

Energy fills the room with a style much like a ‘Couple’s Retreat’ on a cruise. On the Mezzanine level you’ll find the full depth of notes lingering in the room liberating almost everyone who listens. You can feel the beat and rhythmic consistency where any listener ignorant to music might relate to…once you feel the beat, your feet speak.

Heros Band of BC would like to note that anyone can join in.  Bring an instrument, or use one of theirs.