Tucked away in the woods, nestled between the bosoms of mountains in the Squamish Valley Campground is the annual it-spot for Andrea Oakden, Andrea Graham, and Liz Thompson’s Bass Coast Project. The trio founded the music festival in 2009 when they realized the area did not have an event that celebrated local electronic music. 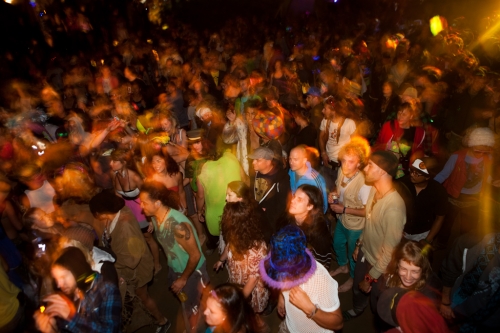 This year’s festival will be held on August 3 – 6, featuring over a hundred artists scheduled to take three different stages. The line-up includes West Coast DJs and artists such as The Librarian, The Funk Hunters, Timothy Wisdom, Niña Mendoza, Mat the Alien, Humans, and more. The festival also features various workshops, yoga classes, art installations, and a mini bazaar filled with hippie-chic gems. 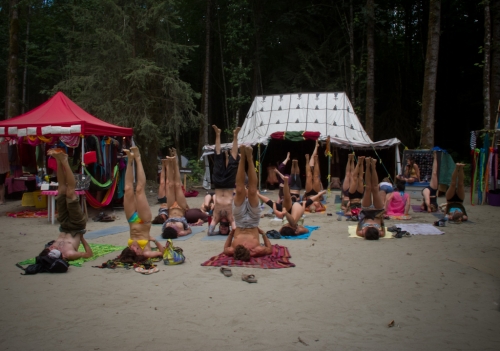 Last year was my first time attending the festival. Admittedly, I’m not the camping type. And even though I’ve been to a number of music festivals, I’ve never gone to one where I had to “rough it” in the woods. But there’s always a first for everything, and this was a mini adventure I couldn’t turn down. 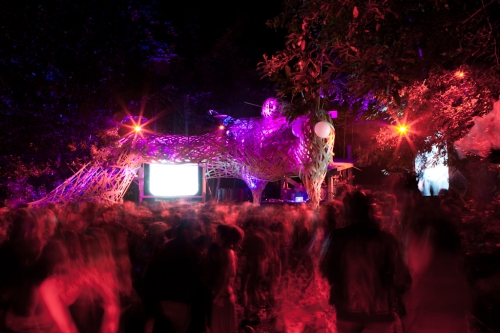 Apart from the intricate stage designs and installations built from re-claimed, re-used and recycled materials, one of the highlights for most festival-goers was the female mud wrestling competition. It was dirty, grimy, and everything you imagine a female mud wrestling competition would be. I stood next to the pit, alongside most onlookers who were either in disbelief of the spectacle or howling at the bikini-clad vixens.

A personal highlight was the festival’s mini bazaar. As I meandered through the various shop tents, I met vendors like Kiki of Kiki’s Delivery Service who sells fantastic alibaba pants from India; fair trade clothing designer Michelle Lynn Johnson of Fairie’s Pyjamas; and Jenni Tom of Jenni Monhstr who specializes in custom-made, clip-on feather hair extensions. 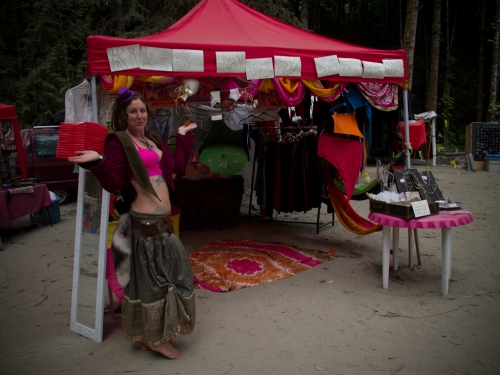 “Everything you need is here,” said singer-songwriter Danielle Lawson a.k.a. Brooklyn Deli Cat, a friend I ran into on one of the campsite’s dirt roads. “You just put it out there in the universe and someone here will give it to you,” she mused as we turned a corner into another area of the campground. She was helping me look for tights to cover my legs from the vicious mosquitoes that feasted on me the night before.

We arrived at a large tent that had a blanket littered with free clothing. It was Squamish fashion designer Sharai Rewles’ tickle trunk collection. After a series of introductions, I began searching through an eclectic mix of old Halloween costumes and random vintage pieces.

Rewles was invited last year to take part in the festival’s fashion competition that featured outrageous couture, where the most un-wearable creation wins.

“Do you know Heavy Metal magazine? These are all inspired by that and I watched a lot of Lady Gaga videos for my pieces.  I can’t wait to see what the other fashion designers have,” as she proceeded to dress me in a punk/burlesque-inspired attire.

“I’ve dismantled a corset like the one you’re wearing and I’ve used a glue gun to create dripping blood effects. Each model has a different weapon, and I’m blowing up helium balloons so when they come out they’re going to attack the balloons,” Rewls explained while sticking safety pins down the side of my loot of the day: a ripped corset from the motley clothes pile. 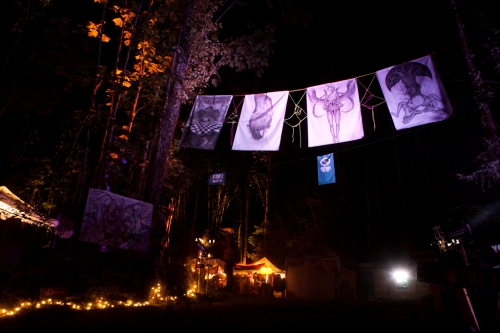 “Bass Coast is a beautiful idea to bring like-minded people together. The festival has a very intimate vibe. A lot of magical things happen here. You can walk down a path and come across the most perfect adventure that you didn’t even know was right around the corner,” gushed Rewls.

And a perfect weekend adventure it was—just remember to bring sunscreen, bug spray, and an open heart.

City of Vancouver and Squamish Nation sign Memorandum of Understanding

Celebration of Nature, Music and Dance brings artists together to protect forests