With over seventy artists and counting, Squamish Valley Music Festival has just announced its official Line-up for August 8, 9, 10, 2014. Hosted at the Commodore Ballroom this morning (January 29th), the room was filled with music enthusiasts, media, and music aficionado's alike.

Without further adieu, the Headliners this year include:

Bruno Mars, who picked up the Grammy Award for Best Pop Vocal Album. Arcade Fire, who's new album 'Reflektor' is this years most anticipated Rock Album. And last but certainly not least, Eminem. This will be his first Western Canadian show in more than a decade. With Headliners of this caliber, Squamish Valley Music Festival, is certainly set to please music fans and festival goers alike.

Announcing the Line-up this year were a very excited Paul Haagenson (President, Live Nation Canada), Erik Hoffman (Live Nation Canada Vice-President of Talent), and Paul Runnals (Executive Producer of Squamish Valley Music Festival and Vice-President of brand.LIVE). They all agree that, “this event represents a turning point, not only for BC’s live music industry, but also for Canada’s event industry as a whole,” as this year will be the Festival's biggest year yet.

Hopefully this mornings announcement at the Commodore is not a reflection of the upcoming August festival; the much anticipated line-up announcement promo video experienced some minor glitches. Although, if the festival is anything like its 2013 predecessor, then we are in for a treat.

This year, "Squamish Valley Music Festival has expanded onto the Centennial Fields, allowing the event to increase its footprint from 32 acres to 81 acres, safely accommodating more than 35,000 guests per day, up from 19,000 per day in 2013."

Live Nation is so committed to the event that it is investing 12 million dollars into the Festival and expects a 55 million payback to British Columbia. Other interesting facts include: 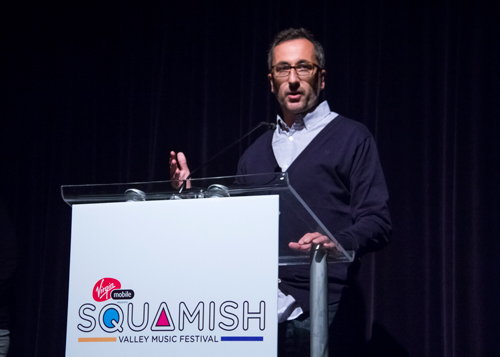