Avant garde music from the 16th and 21st centuries 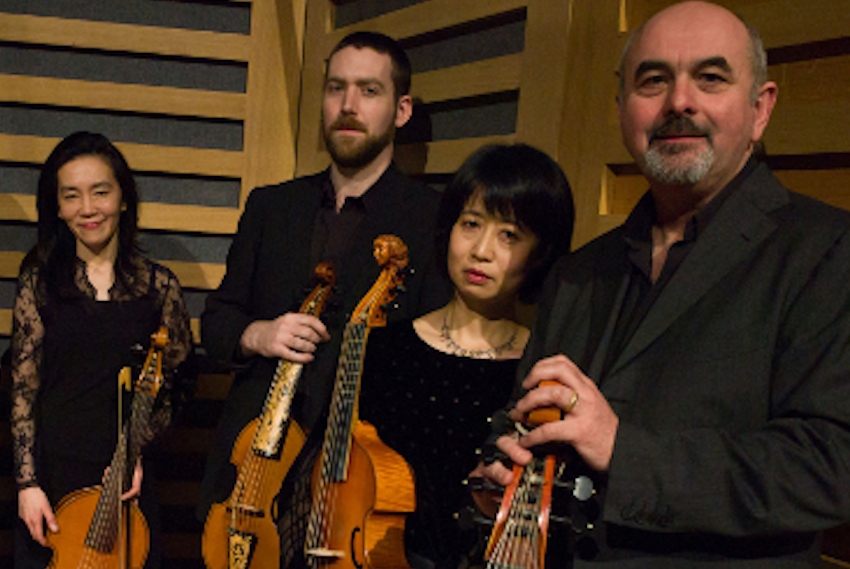 The featured resurrection this time was the Renaissance viol, a seven-stringed bowed instrument that enjoyed about 150 years of rock star status in the 16th and 17th centuries before giving way to the more modern upstarts of the violin family.

Officiating clergy at last week’s resurrection were the members of the Fretwork Consort, which can claim much of the credit for the viol’s revival. The group comprises all five registers in the canonical “chest” of viols: treble, alto, tenor, baritone and bass.

But the voices mesh so perfectly that it almost sounds like a single instrument, along the lines of a multi-stop pipe organ, rather than a five-performer ensemble – a “consort,” versus a quintet. Such impeccable coordination is all the more impressive considering that Fretwork, in its 30-year history, has churned personnel so many times that by now the only original member is founder Richard Boothby, whose viol da gamba anchors the bass register.

The distinguishing feature of a viol, as opposed to a latter-day violin, is the ridged frets that mark off the fingerboard neck – hence the consort’s name, “Fretwork.”

The frets dictate a whole other performing style: the instrument held neck upwards with the bout (or sounding box) propped on the lap rather than tucked under the chin. The bow is more convex than a violin’s. Unlike the tremulous left-hand resonance of the violin, the viol draws its power from the right-handed bow, which is plied underhand, like a basketball “granny” free throw, for extra oomph.

The result is a more crisply defined tonality, Boothby explains, “acidic, yet sweet” – ideal for the new-fangled Renaissance innovation of polyphony that was just coming into its own in the early 1500’s. That’s when – amidst a full-dress Latin mass – the Oxford organist and choirmaster John Taverner ventured a polyphonal elaboration upon the Gregorian cantus firmus plainchant of just two little words: In Nomine (“in the name of,” as in “blessed are they that come in the name of the Lord.”)

This daring leap was such a show-stopper that English composers for the next century and a half vied to follow up with ever-more-fanciful contrapuntal embroidery around that same two-word phrase. In its EMV concert, Fretwork recapped the original Taverner In Nomine and a dozen later derivatives.

They range in tone from the playful (Christopher Tye’s setting, which embeds the plainchant in a crossfire of street vendors crying their wares) to the downright spooky (a pointillistic pizzicato setting by an anonymous genius known to posterity only by his nom de viol, “Picforth”). By the 17th century, on the brink of the baroque and the twilight of the viol, the In Nomine’s had devolved into more freeform, programmatic or courtly styles – Aires and Fantasias.

But the instrument has enjoyed a comeback lately, thanks in no small measure to the advocacy of Fretwork itself. Just as the crispness of the viol was cherished by cutting edge Renaissance polyphonists, so is it valued by avant garde chamber music innovators today.

At the Consort’s invitation, English composer Gavin Bryars in 1995 produced a pair of In Nomine’s inspired by Purcell’s Fantasias. These, for me, were the stand-out entries in last week’s EMV concert. The girls of the Vancouver Children’s Choir (charmingly, if somewhat incongruously, tricked out in navy blue pinafores and conducted by Richard Lang) carried the cantus firmus line with a choral setting of a pair of Blake Morrison nature poems.

That left the consort free to underscore the chorus with contrapuntal filigree. The spondaic “plainsong” offset against the anapestic viol phrasing attained an almost balletic grace, like supple skin overlaying nimble bone.

Ease on down to Ashland for Oregon Shakespeare Festival's 'The Wiz'