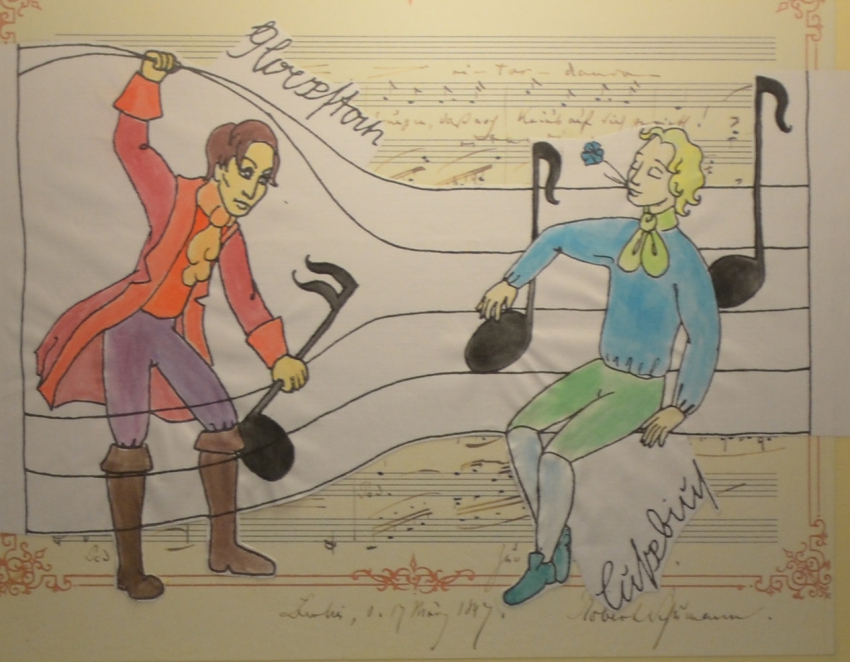 Long before his descent into schizophrenia, Robert Schumann, the iconic luminary of German Romantic music, was already showing signs of split personality. But his multifarious nature first presented itself in artistic heteronyms that he recruited to his creative purposes.

As a critic he took on the persona of “David” to smite such contemporary “Philistines” as Wagner and Liszt. And as a composer he embodied two distinct beings, each with its own name and predilection: fervent, stormy Florestan and dreamy, lyric Euseubius.

Whatever pain this duality might have caused Schumann himself (he died in an insane asylum, age 46, two years after a suicide attempt), both sides of his nature were exquisitely reconciled in the Elias Quartet’s recital this week at the Vancouver Playhouse for the Friends of Chamber Music (FOCM).

With Florestanian zeal, the London ensemble lit into the contrapuntal first movement introduction to Schumann’s A minor Quartet (Op. 41, #1), before backing off into a lyrical, Eusubian Andante, with a theme and counter-theme render respectively by first violinist Sara Bittloch and second violin Donald Grant.

A like contrast marked the next three movements, too. The nimble Eusubian Scherzo is offset against a hard-charging baseline by cellist Marie Bittloch and viola Simone van der Giessen. Then, in the Adagio, the Bittloch sisters take up a tender love ballad whose viola accompaniment is presently stirred into a roiling interlude before subsiding back into a gentler recitative. Even the Presto last movement, where Florestan initially capers to a folksy, bagpipe-like “musette” strain, then dials down the tempo to turn the same melodic line into a Eusubian chorale.

No wonder the Elias Quartet is so in tune with Schumann; their present tour comes on the heels of a series in London’s Wigmore Hall performing the composer’s entire quartet repertoire. They even commissioned a New Work by contemporary British composer Sally Beamish that draws on the score of Op. 41, #1 to hauntingly recapitulate the solace and travails of Schumann’s life.

We can readily recognize thematic elements from the A minor Quartet we’ve just heard. We start with a reprise of the chorale, then on to the musette and so on, backwards through Schumann’s score in nine very short movements.

But Beamish’s treatment of the material is ruminative, attenuated – fragmentary shards, rather than flowing melodic lines. Lurking always in the background, intermittently welling up only to subside again, is a sustained high A note from the violins, betokening the tinnitis that bedeviled Schumann on his way to the madhouse. And offset against this torment is van Giessen’s viola love song in the sustaining voice of Schumann’s devoted, complex and independently brilliant wife, Clara.

In an impressive display of versatility, the ensemble offered a Schumann-free latter half of the recital. Although also in A minor, Franz Schubert’s “Rosamunde” Quartet (Op. 29, #13, D 804) could hardly feel more different from the previous Schumann quartet. Drawing on themes from his signature art songs, Schubert ranges from despondency to resignation to quiet joy. The group was a pleasure to watch as well as to listen to; the visual cues between the two sisters, as well as the evident sympatico between guest viola van Giessen and Elias co-founder Grant.

To conclude the concert, Grant led the group in a series of pieces from his native Scotland. They started with an eerie and ancient New Year chant and ended with Gant’s own original composition of foot-stimping reel. Most of the FOCM crowd looked to be nearly twice the age of the Elias members, but we jiggled and jounced as best we could in our plush Playhouse seats to the heady Highland strains.