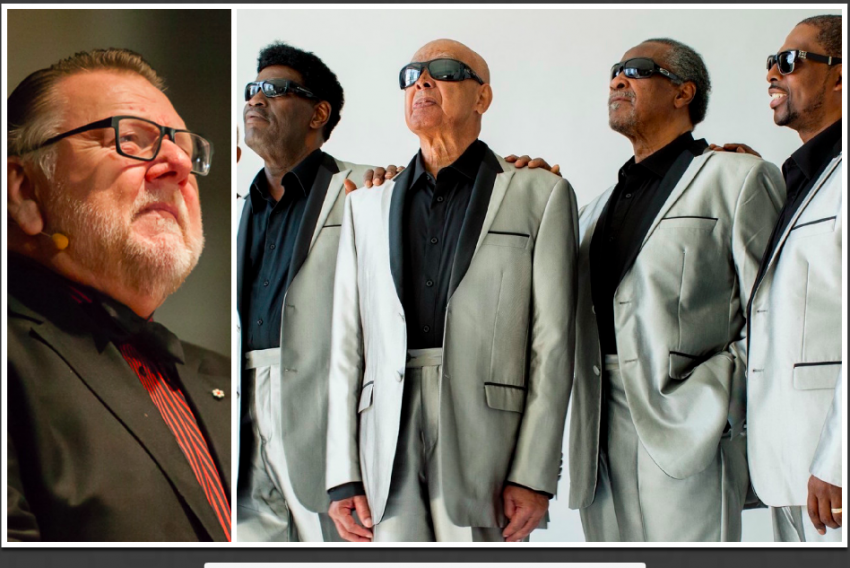 The blind leading the blond. Photos: CBCmusic, Blindboys of Alabama

They’re neither blind, nor “boys,” nor from Alabama – at least not all of them, not anymore.

Yet as the Blind Boys of Alabama they’ve earned their place at the apex of America’s roots music pantheon, and the headline slot at on the opening programme of the Chan Centre’s benchmark 20th Anniversary season.

The sobriquet did fit quite accurately some 78 years ago when the group began as the gospel choir of the Alabama Institute for the Negro Blind. Back then, in the U.S. Deep South, any Black male would be addressed – or, rather, dismissed – simply as “boy.”

But founding member Jimmy Carter was literally just a boy when he joined the choir. He was barely 10 years old and already consigned to a vocational training track for a lifetime making mops and brooms.

It hasn’t exactly worked out that way for the multi-Grammy-winning performer and his group. They’ve gone on to share stages with everyone from Dr. Martin Luther King to Stevie Wonder. The’ve played for the last three occupants of the White House (but not for the current squatter).

Yet now, rounding on his ninth decade, there’s still something boyish about Carter – his fluttering frisson when he hoists his gravelly growl up into treble registers for a sostenuto wail; the way he keeps prancing excitedly to his feet faster than his (sighted) lead guitarist Joey Williams can ease him back down onto his stool.

Likewise the group’s other two blind vocalists, Paul Beasley and Ben Moore. Not quite nonagenarians, they’re still venerable enough to cut stately figures in their cream-white double-breasted blazers as they file onstage, hands on each other’s shoulders. But, once they get cooking, they’re seized with boyish zest – Moore rocking in place and waving arabesques with his hand-held microphone; Beasley crooning his ecstatic falsetto straight up at the overhead spotlights.

Their stage presence is all the more engaging for its unselfconsciousness. Lacking visual feedback, they groove with an extra spontaneity, which – as Gospel true believers – they’d probably ascribe to direct communion with the Holy Ghost.

That same Spirit also touches their co-star in the Chan Centre spotlight, Canadian tenor Ben Heppner. A self-described “church-boy” ever since his Evangelical upbringing in northeast B.C., he came to UBC as an undergrad to credential himself for a return to Dawson Creek as a choir director. But he got diverted into the university’s performance programme and went on to win worldwide acclaim on the grand opera stage.

By the time the Chan Centre opened, Heppner was already a celebrity headliner in the showcase venue’s very first season. Now revisiting the same stage, some 20 years later, represents for him not just a homecoming to his alma mater, but also a return to his gospel roots.

Still, his opera training shows. The gestures are studiedly stage-worthy, and the vocalization – at least in his solos – ranges from lyric bel canto to crisp, Wagnerian Sprechgesang. When he gets on down with the Blind Boys, though, he can slot right into their close harmonies and holy rolling momentum.

Such cross-fertilization is what the Centre is all about, according to its co-director, Joyce Hinton. Preparing each season’s line-up is “the best job ever,” she admits: she travels the world to seek out eclectic influences that, when juxtaposed on the Chan Centre stage, can synthesize something fresh and new.

Such bravura performers are drawn to the Chan Centre not just for the chance to interact with each other, but also for the unique qualities of the hall itself, according to co-managing director Cameron McGill. He has overseen the venue’s physical plant since its earliest design phase on the drawing boards of the late, great Vancouver architect, Bing Thom.

Walking the Vancouver Observer on a preparatory tour of the building, McGill shows off some of the subtle features that adapt the venue to such a wide range of programmes: the resonant, height-adjustable rotunda ceiling with embedded lights; the four-storey tall acoustic banners that ring the hall, which can be reefed or unfurled to brighten or muffle reverb; the unobstructed sight lines from any seat in the house.

McGill even ushers us up behind the stage into a towering hollow that was carved out for a pipe organ that never quite materialized. Inside this apse, any pin-drop in the entire auditorium rings loud and clear; two steps forward and you’re once again swathed in concert hall silence. But, he notes, the niche can also amplify the clamour of applause in a way that’s sure to warm any performer’s heart.

Of course even a standing ovation can hardly match the joy of pressing the flesh with an adulatory crowd, as the senior-most Blind Boy demonstrated at the season opener. Right after his signature tour de force rendition of “Amazing Grace” (sung in a bluesy key more reminiscent of “Rising Sun”), the irrepressible Carter once again leapt to his feet and felt his way offstage into the audience.

Led – or, more accurately, back-stopped – by his resigned guitarist, he made a full circuit of the house, shaking hands and blowing kisses all the way, before remounting the stage for a final encore.