"House of Dreams" puts the "chamber" back in chamber music 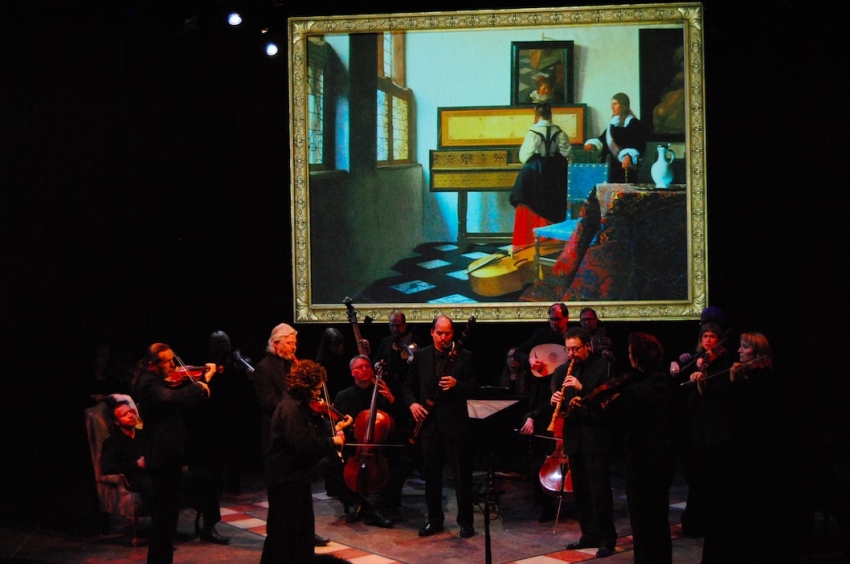 A concert within a concert. Photo: Glenn Davidson.

If anybody can inject rockstar zest into early music, it’s Toronto’s Tafelmusik Baroque Ensemble. Now rounding on its fourth decade of popularizing 17th-18th century masterworks, the ensemble has hit upon a multi-media approach: thematically connected musical excerpts, all linked by a rich montage of projected imagery and some spoken narrative.

When the formula “clicks,” the disparate elements combine to shed intriguing new light on familiar repertoire. But when it misfires, the result feels a bit like a theme park version of “Baroque Lite” that tries a little too hard to please.

Touring here at the Vancouver Playhouse, Tafelmusik’s latest offering, House of Dreams, mostly stuck to the high road with only a few lapses into simplistic Disneyfication. And no matter how strained the multi-media contextualization, the performance was always redeemed by the consummate musicianship of the 17-member ensemble.

Now and then the musical excerpts – barely a concerto movement long at most – might have seemed a bit rushed. But how else could scriptwriter/program designer Alison Mackay whirlwind-tour us through such an ample, self-assigned swathe of geography and history?

Her idea is to celebrate the multifarious ferment of the Baroque spirit by setting the music in some of the spaces in which it was originally performed. Specifically, she homes in on five iconic chambers: the parlour of composer Georg Frederic Handel’s London home, the reception hall of British merchant banker Joseph Smith’s palazzo in Venice, the modest atelier of Flemish bookbinder Jacob Dissius in Delft, the mirrored galleries of Paris’ Palais Royale and the music room of J.S. Bach’s rich neighbour in Leipzig.

These locales provide backdrops for selections by Handel, Vivaldi, Purcell, Marais and Bach, respectively. All five venues have by now become restoration museums. Between them, these institutions have ponied up 40+ images from their collections for slide designer Raha Javanfar to parse on an enormous gilt-framed projection screen behind the ensemble.

Narrator Blair Williams walks us through each of the five museums, noting overlaps in the wall art – Handel owned a Venetian harbour scene by Canaletto, and so did Smith. Yet Smith also had a fine collection of Vermeers, some of which had been acquired from the Dissius estate.

Such coincidences may seem, at face value, random enough. Yet they take on new meaning when you pair the sweep of a Canaletto harbourscape with the grandiosity of Vivaldi’s largo for lute (exquisitely rendered by Lucas Harris), or the luminosity of Vermeer’s “Piano Lesson” with the delicacy of Purcell’s “Saint Cecilia Ode.”

Nor do Javanfar’s projections just hang static in their frame. He zooms and pans about the scenes in witty counterpoint to the music.

The musicians, for their part, are equally kinetic under the guidance of stage director Marshall Pynkoski. They deploy themselves about the stage in tune with the moods and tempos of their solos. Far from the typically stiff tableau of a baroque ensemble, these performers are unafraid to emote onstage – sometimes to a fault; when really fired up, they can turn a Bach Gigue into a bit of a hoedown.

But their enthusiasm is infectious. At the end of House of Dreams, many in the packed audience were heard filing out of the Playhouse happily humming baroque ear worms.