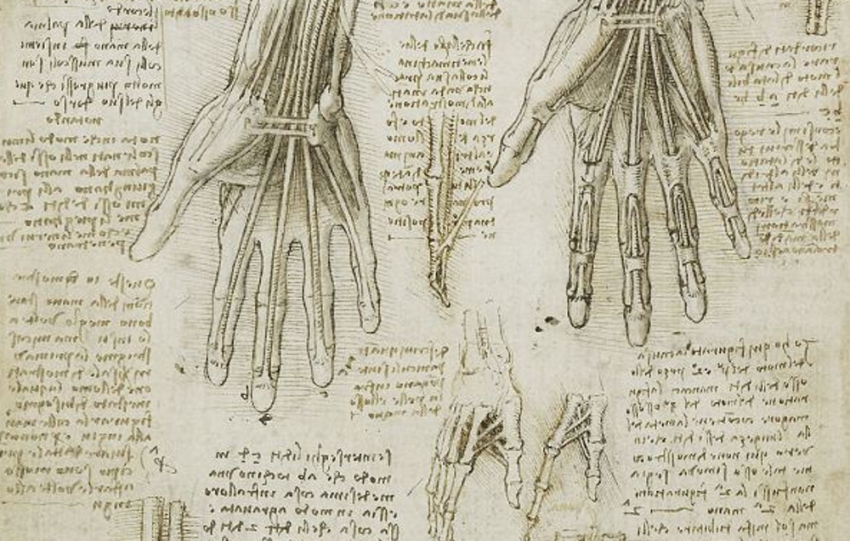 At the crossroads of artistry and artisanship. Image: Leonardo DaVinci

As far as dyspeptic philosopher, classicist (and amateur composer) Friedrich Nietzsche was concerned, a pair of Greek gods – Apollo and Dionysus – share dominion over the realm of music. Apollo epitomizes sweet rationality and Dionysus personifies of turbulent passion; begat by übergod Zeus, both are emanations of pure mind.

Among the group’s 15 instrumentalists arrayed before the Vancouver Playhouse audience for the Early Music Vancouver (EMV) presentation of J.S. Bach, the Circle of Creation, Mackay presided behind the double bass, the second-heftiest (after the harpsichord) material object onstage.

It’s an ideal vantage to appreciate the material foundations of music-making as artisanal handiwork. Bach, after all, was wholly reliant on the rigorously cultivated manual dexterity of players and instrument makers alike, thoroughly enmeshed in a time-and-place specific web of social and economic relations.

Beyond her role as double-bassist, Mackay serves as the author/creator and conceptual driving force of the Circle of Creation programme. In her script, she has bumped Dionysus as Bach’s patron deity. Instead, she has Apollo share tutelary honours with another half-brother, the trickster demiurge Hermes, god of crafts and tradesmen (among other things).

In this she accords with the town fathers of Bach’s adopted hometown, Leipzig. They posted statues of Apollo and Hermes to jointly preside over their stock exchange, the ticking commercial heart of the community.

Commerce, in turn, pumped lifeblood into the city’s other vital organs: the two churches where Bach served as choirmaster; the university, where he recruited many of his musicians; the coffeehouses, where he showcased new work and talent in periodic jam sessions; and the city hall, where he scored public fanfares and recitals.

Circle of Creation features some 21 excerpts to vaunt the depth, range and versatility of Bach’s opus. But in the text that strings it all together, Mackay focuses less on the baroque titan’s prodigious output than on the underlying material culture of baroque Leipzig, what Karl Marx might call the “means of [musical] production.”

That would encompass not just the nexus of patrons, performers and audience, but also the instrument-making craftsmen and, in turn, their “upstream” suppliers of such inputs as wood, goose quills, sheep gut and copper wire (for strings) and even manuscript paper. Nor does Mackay merely adduce these factors in abstract generalities; she names and describes Bach’s particular contemporary collaborators.

All this is illustrated in a series of slides collated by designer Raha Javanfar and video clips by film editor Jane MacRae. The lively montage scrolls across an overhead Jumbitron screen in synch with a running narration by veteran Shaw- and Stratford-Fest actor Kevin Bundy.

The images range from period maps and paintings to Leipzig architecture and streetscapes, interspersed with footage of latter-day artisans faithfully executing traditional crafts.It might have been all too easy for such a format to turn into animatronic theme park diorama kitsch. What saves it is Mackay’s smart writing, her clever curation of idiosyncratic detail, Bundy’s obvious relish of his subject matter and the brisk editing of eye-candy visuals.

And, above all, the music. Few surprises in the repertoire, mostly comprising short snippets of familiar favourites. In fact, the whole first half of the programme is almost entirely tuned in the crowd-pleasing, “easy listening” key of C major and its dominant, G major. (The key signatures get a little more daring in the second half, even venturing into the non-tonal Dorian mode for an “18th century klezmer tune, the only non-Bach composition on the bill, to commemorate the Jewish merchants in Leipzig’s annual town fair.)

But Circle of Creation is no lightweight “Greatest Hits” reel. For one thing, the narration undergirds it with thematic linkage. Then, too, director Marshall Pynkoski’s fluid staging visibly highlights the relations and tensions between the orchestral parts.

This is achieved by simply moving the players around the stage like strolling mariachi’s to foreground or background the melodic and harmonic elements. It looks free and easy, but in fact it’s a daunting achievement, testimonial to the consummate musicianship of all 15 instrumentalists.

To keep themselves footloose, they all must play from memory, unencumbered by music stands or printed scores. Hard enough to do for just a single musician’s solo; unimaginably complex for the melded music of a full ensemble. Yet concertmaster Elisa Citterio manages to lead the whole orchestra without conducting, as though it were an intimate chamber quartet.

Stand-out performances by the wind section – oboists John Abberger and Marco Cera with bassoon Clay Zeller-Townson. In a highlight of the evening, Bundy led the entire EMV audience singing solfege rounds of the eight note baseline of the Goldbergs, which harpsichordist Stefano Demicheli then elaborated into the opening aria and a pair of ensuing variations.

Intense audience participation! The atmosphere grew so charged inside the Playhouse that some harpsichord strings even snapped under heat of the overhead spots and had to be replaced/retuned both before and during the concert.

The contretemps only served to underscore Mackay’s premise about the centrality of material foundations and the musical reign of that trickster Hermes.