The mother of all concert series 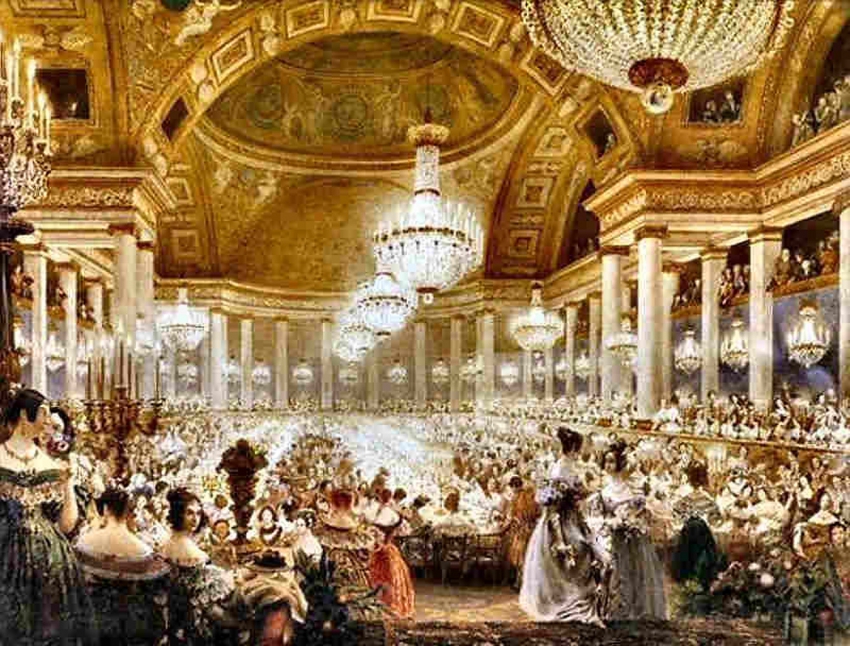 A musical offering at the Tuileries Palace. Image: Eugène Viollet-le-Duc

After grand summer extravaganza of its annual Bach Festival, drawing far-flung talent and citywide audiences, Early Music Vancouver (EMV) now returns to its customary Christ Church Cathedral venue with a more intimate programme of instrumental music, drawing on the impressive local talent of the Victoria Baroque ensemble. Leading the group as guest conductor and violinist was a newly transplanted early music luminary, Jeanne Lamon, who has retired to Victoria after long innings at the helm of Toronto’s famed Taffelmusik.

Loyal subscribers turned out in force for the launch of the society’s 50th full-year concert season. Aptly, the launch concert’s program recapitulated highlights from what was arguably the first-ever subscription series of public concerts, dating back to 1725.

That’s when French King Louis XV granted special dispensation for his previously monopolized court musicians to perform for the ticket-buying public when the Royal Opera was closed for religious holidays – provided nothing on the bill included French texts or opera music. That still left room for some of the most dazzling music of the High Baroque, and the Concerts Spirituels (as they came to be called) went on for another 65 years, right up through the French Revolution, in a grand salle of the Tuileries Palace.

Early Concerts Spirituels would have featured royal favourites like longtime court composer Michel Richard de Lalande, whose Fantaisie ou Caprice led off the EMV recital on a note of very French suavity. But the Parisian public was also avid for the painterly dramatics of the then-ascendant Italian composers like Francesco Geminiani, whose fiery La Follia (“Madness”) concerto came next on the EMV program.

And then, to conclude the first half of the concert, the evening’s pièce de résistance: all seven movements of Georg Philipp Telemann’s Overture Suite in D major. The piece melds French elegance and Italian brio within a framework of Germanic rigor.

After the introductory flourishes and ruffles, there’s a Plainte of elegiac antiphony between the strings, woodwinds and a pair of valveless baroque horns. The Réjouissance pitches the recorders and bassoons into the caper of an almost Italianate tarantella. Next, the winds chime in with a resonant Carillon air against a pizzicato background of strings, which is followed by a high-blown Tintamare chanty. The flounce of a “slow jig” Loure clears the way for a spirited concluding Menuet.

That’s a hard act to follow, but we ease into the second half of the concert with the initial dips and swoops of Jean-Marie Leclair’s Chaconne, building up to a heady froth of trills by flautist Soile Stratkauskas, Victoria Baroque’s music director.

Jean-Joseph de Mondonville’s Sonata # 1 of Opus 3 starts out with a strutting, prancing overture. Who’d have thought he had it in him to treat us to an uplifting little aria movement in march tempo, followed by a skipping, aerobic jig of an allegro movement.

All of which served as just prelude to another showpiece of the evening: Haydn’s “Alleluia” Symphony. It starts off with an urbane Allegro in the crowd-pleasing, easy-listening key of C major. But then, in the Andante, Haydn reminds us that he is, after all, the Surprise Symphony prankster, with each orchestral section patrolling the rills and ledges of his theme in measured, cat-like tread, almost – but never quite – veering off the melodic line into minor key modulations.

He continues these games right through the lilting Finale, but never mind; he lands us, of course, safely back in C Major, clapping in an enthusiastic ovation and eager for more Early Music instrumentals recitals. Luckily, as EMV artistic director Matthew White points out, that appetite now grows easier to fulfill with such top-tier talent as Lamon and the Victoria Baroque just a ferry ride away rather than having to jet in whole ensembles for every concert.