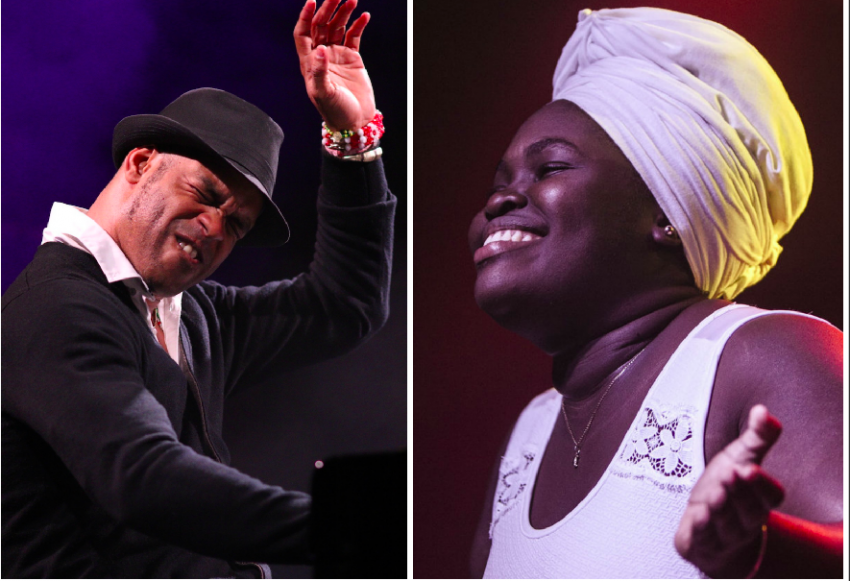 By the end of their marathon concert Sunday night, Daymé Arocena and Roberto Fonseca managed to turn the Chan Centre into a mamboing, sing-along mosh pit. No mean feat, to anneal the innate Canadian reserve of a 1,200-strong capacity crowd.

But the evening hardly started out in an orgiastic frenzy; more like a solemn religious introit. As her black-clad acolytes – pianist Jorge Luis Lagarza and bassist Rafael Aldama and drummer Yissy Garcia – array themselves behind her, Arocena plants herself in the spotlight, front-and-center.

She’s statuesque in a lace shift and white turban – vestments of a priestess of Cuba’s endemic Santería faith, a syncretistic blend of Catholic and African iconography. In her thrilling alto, she invokes her patron spirit Yemama, the saint of the sea. Her chant isn’t recognizable Spanish; the words pour out with a stately African roll.

All at once, without missing a beat, she breaks into English to voice her delight at returning for the first time in three years to Canada. She “once had a boyfriend here,” she announces with her trademark smile.

About that smile: it’s ear-to-ear and so incandescent that, when the spots now and then fade to ultra-violet, the grin just hangs suspended in space along with the ghostly silhouette of Santería vestments, while the rest of the singer simply vanishes into the background.

When the lights come back up, Daymé’s still there, her smile wreathed in dimples. The woman has dimples everywhere – on her knees and elbows and shoulders, the backs of her hands, even her eyebrows.  She seems to be smiling with her whole body…

…and dancing, non-stop. As sayeth the poet, “she moved in circles, and those circles moved.” Much of the movement is deep down funky bumping and grinding. But she’s also given to dainty little capers, lifting the hems of her lace shift as she minces into the froth of Lagarza’s arpeggiated piano riffs like a wader broaching the shimmering spume of a Playa Paraiso surf.

Daymé’s vocal versatility matches the range of her dance moves, from the scat-sputter of Negra Caridad to the tidal swell of her Cómo. She is equally at home singing in English or in Spanish, with due regard for the metrical and rhetorical exigencies of each.

She intercuts both languages with aplomb in her lilting waltz Maybe Tomorrow and in her concluding number, the raunchy paean Don’t Unplug my Body. At age 26, she looks sure to stay plugged in for years to come as a luminous fixture on the Afro-Cuban scene...

…where Roberto Fonseca has already been blazing for a decade, widely acknowledged as a successor to Buena Vista piano legend Rubén González, thanks to his incomparable tumbao.

In his pre-concert talk, Fonseca introduced the concept to the Chan Centre crowd. As far as he’s concerned, the tumbao, or rhythmic baseline, is the distinctive and indispensible hallmark of all Caribbean music, just as a roux is the foundation and starting point for any Caribbean gumbo: it blends and smoothes disparate ingredients into a harmonious, flavourful whole.

The term has a technical – almost mechanistic – definition, of course. But Fonseca seemed to have something more in mind, something akin to an almost mystical duende that can animate any musical material he chooses to touch.

He proves the point by regaling us with everything from loping habaneras to an almost baroque-sounding toccata, all with his signature tumbao. He switches fluently from a concert grand to an electronic piano, often with one hand on either keyboard. On the synthesizer, he manages to deftly tweak the timbre in mid-riff without breaking stride.

Although trained in classical as well as jazz piano, Fonseca started his performing career as a drummer. He powerfully projects his sense of the piano as a percussion instrument. His communication with drummer Yissy Garcia seemed at times practically telepathic, building on each other’s energy to a fever pitch.

Yet both of them left ample scope for bassist Yandy Martinez Gonzales, the third member of their trio, who discreetly curated the combo’s underlying tumbao in between his own dazzling solos on acoustic contra bass and electric guitar alike.

Fonseca, like Daymé before him, was at constant pains to recruit the audience into sing-along and clap-along ecstasies. The Chan Centre crowd gamely chimed in and the performers graciously cheered our rather wan, Canadian efforts. Finally, though, Fonseca couldn’t help but remind us that “it’s usual to dance at our shows.”

So we rose to the occasion – and to our feet – for a prolonged and frenzied ovation.