Paul Simon And Sting take a journey to Graceland 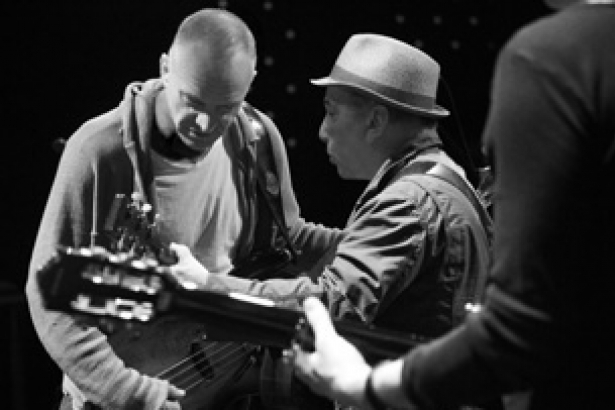 “I just have one question,” Paul Simon asks the name to his left. “ Is that a muscle suit?” The audience laughs.

“Perhaps you can wear it after,” replies Gordon Sumner, aka Sting, with a smirk.

Legends. That is the only word that can be used to describe those two men, who performed together at Rogers Arena on February 20th. With their combined careers spanning nearly 80 years, it’s no wonder they got an instant standing ovation, but for Sting and Paul Simon it was just another day.

Coming together for the first time in their remarkable journeys, the two elder statesmen each took their turn in the limelight, playing two sets each, with some duets in between. The number of musicians on stage was reminiscent of The E Street Band or Lyle Lovett’s Large Band, but was in fact simply a merging of Simon and Sting’s respective backers and numbered 14 in total. The instruments were as varied as Paul Simon’s repertoire with three drums, several guitars, mandolin, fiddle, accordion, a French horn, two different types of saxophones, piano, bass, piccolo, flute, cello and backing vocalists. Combined with the vocal talents of Simon and Sumner, the result was a two-hour and forty minute epic clash of musical titans and featured some of the greatest hits of the last fifty years.

I have distinct memories of Paul Simon growing up. There was always music playing in the household and Paul Simon’s Greatest Hits seemed to be one of the more popular choices. One of my most vivid images of my childhood is that of my mother belting out the chorus to “50 Ways To Leave Your Lover” wherever that song happened to be playing. On Thursday night, I got to hear it live. It was still crazy (and great) after all these years. It wasn’t the only highlight for me; there were many. Sting fans got there fill as well.

Early on his set, Sting – who played first – played both “Everything You Know is Magic” and “Roxanne” and the epicness of the whole night was shifted into overdrive. Sting, who is roughly a decade younger than Simon, has a little more power and oomph in his voice, but Paulie still has chops and quite the range, and in my opinion is the better out of the two.

There were other great moments, such as ending one number in four-part a capella harmony, another having duelling drum solos. The biggest applause however may have been when Simon referenced the Women’s Hockey Team beating the United States in the Gold Medal Match.  Given that they were in the literal home of the Canucks that got a long lasting ovation. There was the humour too. As well as the aforementioned “muscle suit” jibe, Sting said the following “being an Englishman one of my fantasies is to write a country song”, which he did and did well.

While each of their two sets were amazing, the encore brought the night to a sublime and almost metaphysical level. After remarking to myself that the two leads needed more duets, they proceed to do a stirring, stunning and bravura version of “Bridge Over Troubled Water” that gave everyone in the audience chills. That was immediately followed with what is perhaps Sting’s most well known song “I’ll Be Watching You”. As if that wasn’t enough, they ended with a cover song that was a tribute to one of Paul Simon’s musical heroes – the recently deceased Phil Everly. It may have been the classiest thing I have ever seen.

Sting and particularly Paul Simon (who kind of looks like Mel Brooks) are definitely men of a certain age. But they will undoubtedly live on as men of the ages. Their almost three hour performance was a musical and spiritual awakening. It was unlike I anything I have experienced or am likely to experience again. It was a visit to “Graceland”.