Scroungers at the Movable Feast 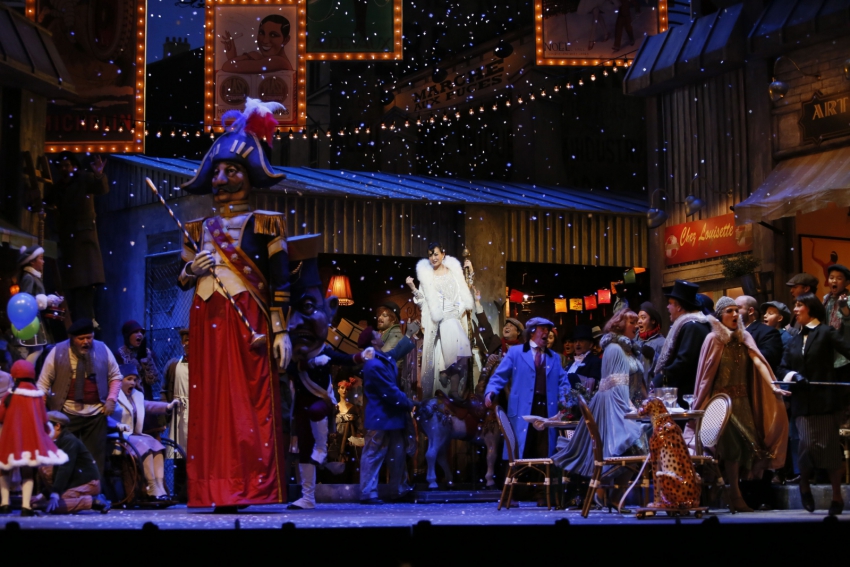 ”To err is human. To loaf is Parisian.” So said Victor Hugo in Les Misérables.

The City of Light has always boasted an economically marginal demimonde that lives for sheer beauty and style. In Hugo’s mid-19th century, they’d be seen as Loafers. Today we might call them slackers or hipsters (fainéants, ou branchés).

In the Belle Époque, when Giacomo Puccini was writing his operatic masterpieces, they were dubbed “bohemians.” And in the 1920’s heyday of Jazz Age Paris – the historic backdrop for Vancouver Opera’s lush rendition of Puccini’s La Bohème at the QE Theatre this month – they were celebrated as a Lost Generation.

But nothing is ever truly Lost in Paris, that most self-regarding of cities. It just piles up in talus slopes of bric-à-brac in the flea markets of the outer arrondissements. That’s where the Montréal-based director/set designer team of Renaud Doucet and André Barbe open their lavish staging of the opera – in the modern-day Marché aux puces de Saint Ouen.

Amidst the bustle, a solitary figure (France Bellemare) stands out in pallid Cancer Awareness pink. Her pensive gait and chemotherapy bandana mark her as an invalid. Browsing the market stalls, she turns up a 1920’s postcard that plunges her into a reverie of Lost Generation romanticism.

So for the next 2½ hours we follow these co-stars through a series of amours, euphorias, anxieties and stratagems to keep body and soul together. We meet their bohemian cronies, a flamboyant troubadour (baritone Geoffrey Schellenberg) and a bearish “philosopher” (bass Neil Craighead).

Reincarnating as the male co-stars’ respective inamoratas, the chanteuse and the cancer survivor of the Flea Market prelude dominate the opera’s mainstream plotline. Joynt plays Museta, the fiery seductress who drives the painter to jealous distraction. And Bellemare steals the show as Mimi, the titular Bohème, a TB-wracked grisette who inspires the poet’s soaring rhapsodies.

To ascribe a “plotline” to La Bohème, though, might overstate the case. The action is eventful, to be sure – the characters meet, fall in love, break up, reconcile, bilk assorted landlords and sugar-daddies, dance, feud, cadge wine and cigars, preen, tease and generally épatent les bourgeois. And in the end, Mimi dies blissfully in Rodolfo’s arms, surrounded by compassionate friends.

But all this hardly adds up to a coherent narrative build-up; rather a series of impressionistic vignettes reflecting the studiedly mercurial natures of the characters and their demimonde. Puccini himself didn’t even refer to the opera’s four scenic divisions as “Acts.” He preferred to call them “images.”

McSweeney’s Quarterly, a wise-ass hipster journal out of San Francisco, offers a curtly cynical summary of the story, such as it is. But, as a mood piece, La Bohème epitomizes the pathos and passion that Lost Generation icon Ernest Hemingway captures in his Paris memoir, A Movable Feast:

“…a very old city and we were young and nothing was simple there, not even poverty, nor sudden money, nor the moonlight, nor right and wrong, nor the breathing of someone who lay beside you in the moonlight.”

That’s the essence that Barbe&Doucet (as they style themselves) so successfully convey with the fluid spectacle of their staging. Since joining forces nearly two decades ago, the Canadian duo has assembled some 30 internationally acclaimed opera productions, including last year’s Turandot here at the Vancouver Opera.

They go in for lavish spectacles, meticulously researched and rich in telling detail but, in execution, suggestively fluid rather than ploddingly literal. Even the choristers are each fitted out with an individualized Stanislavski-style back story to bring the extensive crowd scenes to life, according to VanOpera insiders.

There’s a rather abstruse “Theory of Two Worlds” underlying this approach, as detailed on their website; something about “fractals … which reproduce in miniature monumental motifs... re-temporalising the work … reinvigorating its pertinence… within its contemporaneousness.”

Be that as it may, the result is sumptuous, by turns moody and exuberant (thanks in no small part to the subtle refractions of lighting designer Guy Simard), with smooth stage blocking and lots of eye-candy.

Their La Bohèmehas already played at the Scottish Opera and the Theater Saint Gallen in Switzerland. But the Vancouver version deepens the production’s Canadian connection with a bevy of up-and-coming national talent. Except for Park, from South Korea, just about the entire cast is Canadian. Even the U.S.-born Schellenberg rates as an honorary Canadian, appearing mostly on B.C. stages.

Park’s textured tone sheaths an impressive dynamic range, which carries the role more than his somewhat mannered acting. But Bellemare’s Mimi more than compensates, sustaining their scenes together with her understated grace and vocal delicacy. Their opening Che Gelida la Manina sets a high bar from the outset.

Nothing understated about Joynt. Her coloratura flair and her flouncing dance moves make her the cynosure of all eyes in her famous Act 2 waltz scene. Sparks fly when she and Addis set-to in their love bouts.

But, for all the onstage energy, the guiding intelligence of the performance is plain to see in the pit. The coiled, compact figure of Judith Yan, diminutive in her black frock coat, drives the her musicians with nuanced control, milking all the tuneful sweetness of Puccini’s score while elegantly limning the deft tone-painting of his orchestration.

No wonder the extensive cast called her up into the center of the ample onstage line-up for their resounding and repeated curtain calls.