Speaking in tongues at Chan Centre 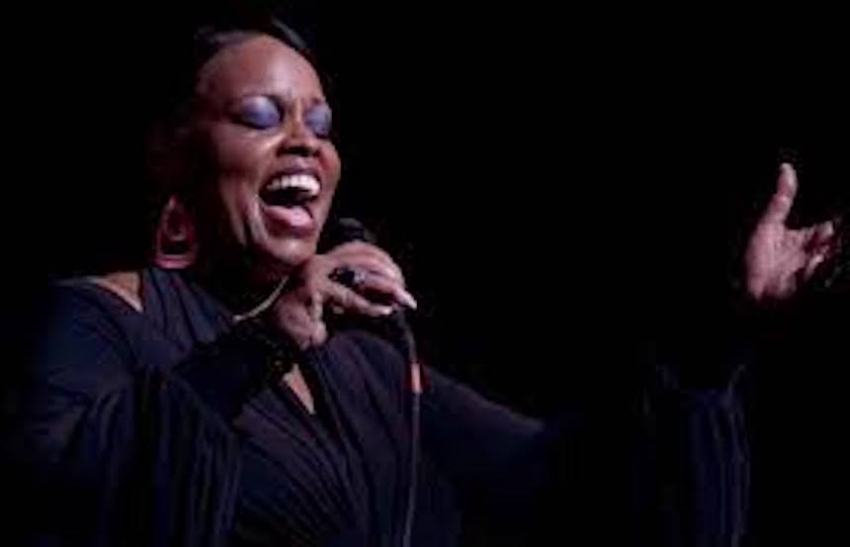 Full house in UBC’s Chan Centre: tier on tier of season subscribers all the way up to the grand rotunda. And, mid-stream in her scat singing riff, jazz diva Dianne Reeve breaks off her droll musical dialogue with bassist Reginald Veal for a bemused aside to the audience.

“This here’s no stage; this is a playground.”

It calls for a special kind of charisma to make a crowd of nearly 1,200 Vancouverites in their concert finery want to get down into the sandbox with you. But Reeves has got what it takes – a stage presence that supercharges her already well-known discographic repertoire to a whole new level of intensity.

There’s the extraordinary vocal range, for one thing – not just in pitch but also in timbre, from childlike soprano purity to raspy, growling funk. Then there’s the obvious, interactive chemistry with each of her instrumentalists – pianist Peter Martin, drummer Terreon Gully, bassist Reginald Veal and her Brazilian guitarist Romero Lubambo.

But most of all – which a disc or even a video can never convey – there’s the body language: the unbroken eye contact, the warmth of the smile, the sassy composure of her struts and her eloquent hand gestures. She strokes the melodic line like a palpable thing, and fingers the air like the frets or keys or stops of some infinitely versatile musical instrument.

Which may be how she has come to view her own voice by now. A master of musical diction, she’s unmatchable for bringing out the nuance of a lyric. But, as she rounds on age 60 – with the confidence to “pretty much do what I like,” as she announced to her Chan fans – she seems to have graduated to a set list that’s long on abstract scat singing.

High grade scat, too, custom-tailored to the each tune in the set – liquid phonemes and dipthongs for the ballads, labials and fricatives for the punchier numbers. She even rolled out an array of cushy Portugese-sounding phonemes for a bossa duet with guitarist Lubambo.

Leave it to the linguists and theologians to ponder whether this is glossolalia or xenolalia, whether she’s singing in the tongues of men or angels. In any case, she’s surely imbued with some kind of holy spirit.

And so is her combo. Pianist Martin limns the sentimental songs with long, ruminative, keyboard-spanning riffs; the jauntier numbers he festoons with arpeggio fringes. Veal, the bassist, lopes alongside the melody like a sardonic Sancho to Reeve’s vaulting Quixote. Lubambo, for his part, manages to cram curves within curves for a fractal ecstasy of ornamentation.

In some of her “tongues of angels” pieces, Reeve channels particular, identifiable angels: Aretha in “Skylark,” maybe Gilberto in the bossa duet, even Sinatra in “One for my Baby.” There are little bursts of Sarah Vaughan now and then, and a loving paen to Ella Fitzgerald in “That’s All.” But Reeve’s treatment of these numbers is always idiosyncratic, never merely quotative.

And, amidst all these tributes to jazz greats, for me the most affecting evocation was of Reeve’s own childhood in her original composition, entitled simply “Nine.” It’s a lilting medley of hopscotch and jump rope chants, interspersed with glowing reminiscences of an age of kindly curiosity and optimism, when every granny on the street would lend an understanding ear to any neighbourhood kid.

Who wouldn’t want to join her in a playground like that?