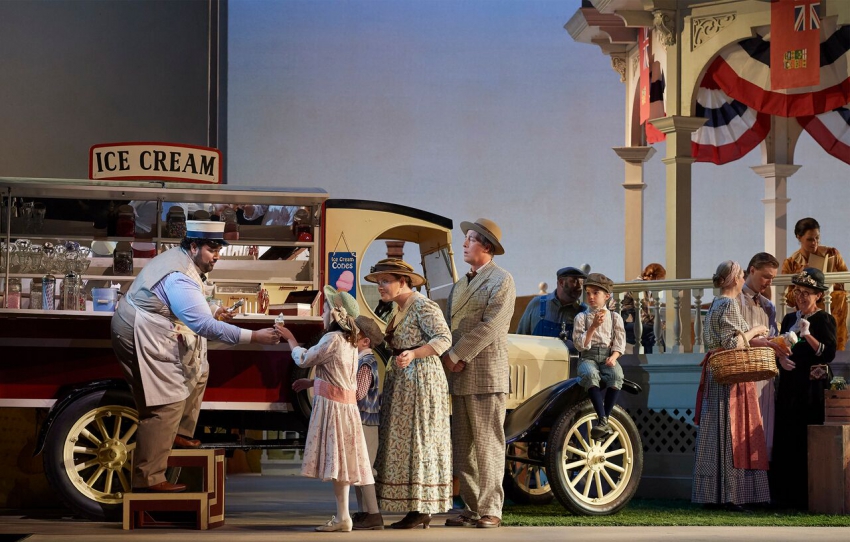 A mercurial claque of ditto-head rubes gulled by a jive-ass conman with a mystery cure-all potion – sound familiar? Or how about a three-way domination game with a military popinjay versus a hapless schlub, both vying to win a preening diva.

Composer Gaetano Donizetti may have thought he was depicting his native Lombardy when he penned L’Elisir d’Amore (the Elixir of Love). But what he really had in mind (although he could hardly have known it in 1832, when he dashed off his masterpiecein a mere fortnight) might have been 20-21st century North America.

Director/designer James Robinson clearly caught the subtext, though, when he set his Elisir in the milieu of rural America back in the early 1900’s, on the eve of the Great War, arguably the much-mythologized peak of U.S. “greatness.” The whole production, from the Grant Wood-style curtain scrim to the single stage set of a lily-white Queen Anne gazebo bandstand, seems bathed in a golden glow of nostalgia.

The Robinson production – costumes, set and all – has been remounted all over this continent ever since the 1990’s. For north-of-the-border engagements like its current Vancouver Opera run, it gets retrofitted with a few touches of Canadiana: Red Ensign flags draped over the red, white and blue bunting, Lord Kitchener’s mug swapped in for Uncle Sam’s in the “I Want You!” recruitment posters.

But it’s a thin veneer. Could we share more of our national DNA than we care to admit with our great gorilla of a southern neighbour? Are we equally susceptible to lazy, flashy seductions?

Surely this flashy Elisir is as seductive as anything you’re likely to see on the operatic stage. Its leading duo – tenor Andrew Haji as the lovelorn swain and soprano Ying Fang as his inamorata – here making their V.O. debuts, are among the opera world’s hottest up-and-comers.

And deservedly so; his limpid voice perfectly limns her resonant coloratura. With dramatic chops to match, too: Haji leans and teeters into his phrasing, like a barely tethered Montgolfier about to lift-off on each updraft of emotion, while Fang, lissom and coy, still remains unflappably rooted wherever she alights, a supremely confident cynosure.

For sheer bel canto gorgeosity, Donizetti’s score remains an unmatchable crowd-pleaser, now rounding on its second century. Eminently hummable, end to end. But, easy listening though it may be for us in the audience, it’s fiendishly hard to execute onstage, with its supple melodic contortions, sustained brio and intricately coordinated ensemble clockwork.

All the more impressive, then, how the V.O., with its professional orchestra and chorus, managed to pull it all together with just a couple of weeks of full-cast rehearsal. Music director Jonathan Darlington conducted from behind his (made in West Van) quasi-antique pianoforte, on which he’d occasionally toss off a pace-setting squib.

Yet, for all its tuneful score, witty libretto and winsome décor, we never quite lose sight of L’Elisir d’Amore’s underlying darkness. These quaint rustics, after all, have their deplorable side. They’re spinelessly cruel, ever ready to turn on any outcast. They’re venal, mentally lazy, fickle, avid for any quick fix, like a magical elixir.

How else could they so willingly fall for such a transparent quack? (Is it a pure coincidence that Hegedus’ fraudster character so liberally laces his sales pitches with the signature thumb-to-forefinger gestures of You-Know-Who?)

And what about that “love” triangle? All three players seem locked in a round of zero-sum one-upmanship to see which one of them can incite the most jealousy and who will flinch first.

Robinson’s Americanized production casts the Haji character as an itinerant food-cart soda jerk. He forks over his last dollar to buy the fabled elixir, which in fact is no more than some kind of cheap hooch (I imagine it as some sort of down-market bitters). No sooner does he get his hands on the wondrous cure-all than he dashes it into a tumbler, tops it with a scoop of ice cream and sips it through a straw.

This counter-intuitive concoction struck me as a pretty fair representation of the Robinson Elisir in its V.O. staging – pungent, yet cloying, with a complex and provocative after-taste. Intoxicatingly heady and timelier than ever; not to be missed.