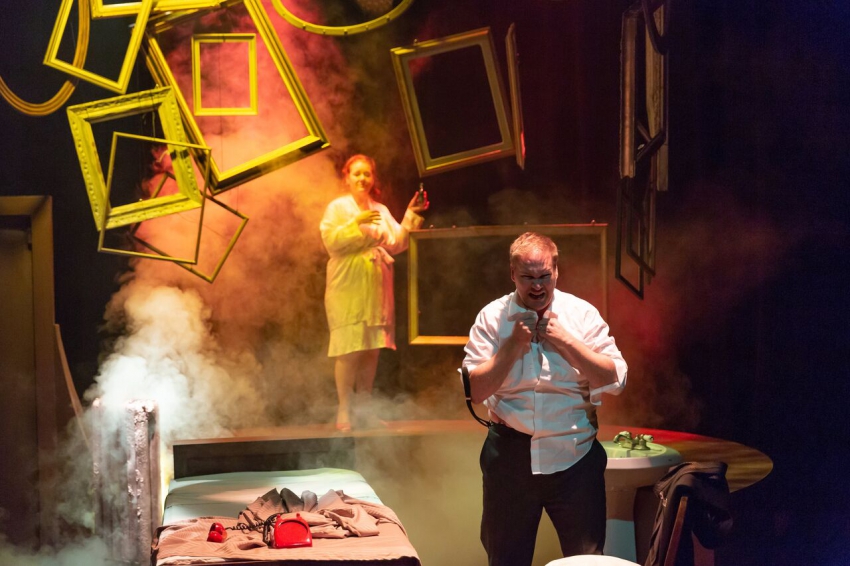 Welcome to Canada’s most Yelp-worthy hostelry.

Raymond (baritone Tyler Duncan), an overweeningly hyper-rational neurosurgeon, has booked the only room, #7. The other six are shuttered because “someone died there,” according to Sophie, the slatternly hotelier (soprano Sarah Vardy). The two of them are the sole occupants of the hotel tonight.

The décor alone (a tour de force by lighting and set designer John Webber) is unnerving enough. The rock-hard, malodorous bed and capriciously overheating steam radiator are crammed into a skull-shaped chamber with glowing orbs swivelling in its picture-frame eye sockets.

The only reason Ray’s stopped here at all was a disconcerting momentary blackout on the highway. There he’d been cruising along in his Jag, calmly musing about how, at age seven, he traded in his childhood world of “mystery,” realizing that “only fools and geniuses love paradox.” In this smug reverie he nods off, only to lurch awake, swerving to shy away from – what?

An animal? A human? A potential hit-and-run plaintiff? But it was something small! Almost no impact, really. A child, God forbid!? Or a dream? Or nothing at all? Yet something had seen him; even smiled. Or maybe not?

He checks into the Nigredo – the only wayside hotel within a two-hour radius – to steady his frayed nerves. An onstage combo limns his swirling anxieties with gusts of roiling jazz by the late Canadian/Latvian composer Nic Gotham. Ray needs space to think through what did – or didn’t – just happen.

But Room #7 is not much of a decompression chamber. For one thing it’s not lockable; no key available. So there’s no telling when Sophie will suddenly burst in on him, offering such amenities as a dinner tray (“your favourite…left-overs”), a bath (“bubbles ‘r no?”) or a nuzzle against her left breast so he can “listen to my heart” – medically, of course – and assuage her death angst.

He dismisses her vamping and her hypochondria: “You’re as healthy as I am.” To which she cryptically rejoins, “Bingo!”

She’s onto something there. He’s no healthier than his half-mad hostess. They’re each pretty flawed in ways that seem mysteriously interlinked. Ray’s afflicted with a sense of “someone drowning.” Someone he “can’t remember [but] used to know.” Sophie, for her part, dreads dying in her sleep. But if she does, she warns Ray, “I’ll take you with me.”

Meanwhile, though, she has a “singing telegram” for him: an obscurely menacing bathroom ditty from his childhood about a little boy who disappears down a tub drain. “How do you know that?” Raymond asks, aghast.

It gets worse. Her voice starts erupting in on him whether she’s in the room or not. It seeps through the floor, the walls; sometimes, with tinny mechanical overtones, through the room phone. (All this ventriloquy thanks to the reverb wizardry of sound designer Malcolm Dow).

The radiator fumes, subsides, explodes again, stifling and scalding him. He strips out of his business suit and down to his skivvies, howling – to no avail – for a change of room. But he’s trapped: #7’s now locked. He’s reduced, at last, to pleading just to be let out.

“I’ll listen to your heart,” he wheedles. “I’m hurt.” She replies (in High Church Latin, no less): “Physician, heal thyself.”

And then, sounding far off but getting closer, comes a new Voice – Vardy’s soprano, still, but now with the quavering tenor of a trapped child. Ray plucks up his courage to query the Voice.

Thoroughly spooked by now, the doctor falls to frantically gibbering mantras of rationalism: “Square root and hypoteneuse, calculus and eye of newt…there is no ghost in the machine”

The talismans prove powerless, though. In a burst of crimson feathers, a transfigured Sophie comes crashing through the ceiling.

She sings how she was Ray’s watchful childhood companion “in a corner of your mind,” his “darling and delight” until banished, at age seven, along with “paradox and mystery.” But now, since “a creature strayed into the path of your oncoming mind…you must listen to my heart, and disregard me at your peril.”

Whereupon the jazz score sheds its jagged angularity, and turns lyrically transcendent. Sophie, likewise, has shed her frumpy housecoat. Now costume designer Barbara Clayden has fitted her out with a scarlet kimono of almost sacerdotal dignity as Sofia, goddess of gnostic Wisdom.

Webber shatters the skull-shaped confines of Room 7 with seven ceiling-to-floor shafts of light – pillars of Wisdom? – to frame Sophie/Sofia for the opera’s climactic aria, a soaring, richly allusive and paradoxical hymn to Wisdom as a goddess and a mindset. Then she confers her kimono vestment upon Ray. They embrace and sink into the rain of crimson feathers that now soften Room #7’s bed, singing a highly eroticized duet that draws heavily on the Biblical Song of Songs.

For all its wild swings of tone, the production’s momentum never flags, thanks in large part to stage director Alan Corbishley’s deft pacing and blocking. But much credit is also due to the onstage quintet, whose non-stop hour-long improvisations matched the protagonists’ shifting moods almost metabolically, like the accompanists in such Asian art forms as Indonesian wayang, Keralite kutiyattam or Chinese opera.

Conducting them was like herding cats, City Opera artistic director Charles Barber relates. Each musician played multiple instruments, acoustic and electric, in different tonal ranges. Percussionist Martin Fisk, for instance, had 21 different sounds at his disposal – everything from vibes, glocks and woodblocks to ratchets and gongs. And Gotham’s score leaves so much improvisatory latitude that no two rehearsals or performances are alike.

Both co-stars boasted acting chops – rare in an opera singer – to match their vocal accomplishments. And their diction brought out both the tension and the drollery of MacDonald’s libretto – at least until the final aria and duet.

At that point, I felt, the orchestration became almost too dense and the text too richly allusive to parse on the fly. Too bad, because it’s the dramatic climax of the work and a poetic tour de force. It’s worth going back to read the original script.

Nevertheless, even without a word-for-word understanding, we can catch enough to feel a sense of relief and, yes, even redemption when we check out of Room #7 and back into the dark and stormy night.