Musical "Heathers" at The York: teen angst with a body count 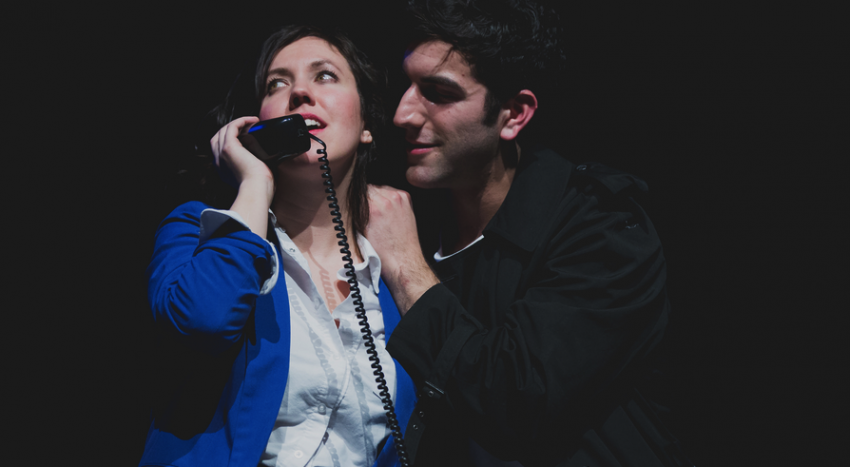 Hell, philosophers tell us, is Other People. But High School is way worse: whole posses of hellish Others, each in their own way out to grind us down. Teenage suicides, shootouts and mass murders are rife – always good for a few laughs.

Such is the vision of co-authors Laurence O'Keefe and Kevin Murphy in their darkling stage musical version of the 1989 Wynona Rider movie "Heathers."  Over the past five years, the show has attained cult classic status in productions across the U.S., not to mention Australia and Scotland. Now, under the direction of Vancouver's own freelance funnyman David C. Jones, it makes its Canadian debut.

To bring it off, Jones has tapped just about all of Vancouver's BFA and MFA theatre programs to assemble a bevy of local talent -- 17 actors, a musical septet and an eight-member production team -- for his "Gently with a Chainsaw Artists' Collective." The show runs through January 17th.

The GWACAC won't hold the Canadian monopoly on "Heathers" for long. Toronto and New Brunswick troupes will stage their own versions in February and March, respectively. It seems in this U.S. election year, Canadians just can’t get enough of schadenfreude about the murderous juvenilia south of our border.

Let's not kid ourselves, though, that High School Hell can't happen here. Vancouverites might find the show's interplay of adolescent cliques and clans all too familiar. From the very first scene, the jocks, nerds, preppies and hipsters of generically suburban Westerburg High all jostle each other in a non-stop quadrille of one-upmanship.

Queening it over them all is a trio of cheerleader types, all bearing the quintessentially Gen-X girly name Heather. Red Heather (Synthia Yusuf) tops the triumverate, with Yellow Heather (Devon Busswood) as her ditzy blonde acolyte and Green Heather (Nhi Do) as her downtrodden flunky. A pair of varsity lettermen (Colin Sheen and Hal Wesley Rogers) serve as their slavish squires.

Needing an accomplished forger for hall passes and such, the Heathers recruit brainy, neurotic Veronica (Christine Quintana), the narrator and star of the show. She’s flattered, at first, to be so suddenly catapulted from wallflower obscurity to the innermost circle of prestige. But then she falls for J.D. (Kamyar Pazandeh), a new boy in town. He’s a darkly handsome, black-trenchcoated, Baudelaire-spouting loner – anathema to the in-crowd.

Even more outrée, by Westerburg High standards, is Veronica’s long-standing best friend, Martha (Steffanie Davis), who’s XXL both in heart and in dress size. The Heathers dupe her into showing up at a drunken homecoming bash, only to cruelly prank her. Veronica, outraged, resigns their clique, only to repent the morning after and beg Red Heather for forgiveness.

The alpha bitch demands a groveling apology, with Veronica meekly on her knees offering up a “hair-of-the-dog” hangover remedy – which D.J. has spiked (accidentally?) with Draino. Red Heather promptly dies in hideous conniptions, leaving it to Veronica to invent a cover-up story. Using her forgery skills, she concocts a Sylvia Plath-inspired suicide note that makes Dead Heather sound much deeper, posthumously, than Red Heather ever seemed in life.

Ensues a round of “consciousness-raising” suicide prevention assemblies at the school. A graveside séance with the surviving Heathers and their pet lettermen turns into an attempted date rape of Veronica. In revenge, J.D. lures the two football yobs back to the graveyard and out of their pants, then cooly shoots them dead.

Again Veronica deflects suspicion with a couple of forged suicide notes. But these improvisations are starting to spark a real-life suicide epidemic, with both Yellow Heather and gentle Martha attempting to do themselves in. And by now it’s starting to dawn on Veronica that her tender swain might have an anger management problem. Her angst grows as she’s haunted by the shades of her victims.

She tries to break up with J.D., which only incites him to further violence. Why not blow up the whole student body at a go with a bomb at a pep rally? Trying to thwart him, she winds up shooting him with his own gun. But then there’s still the ticking IED…

A lot of this is morbidly funny, but much of the witty libretto gets lost in the jagged, thumping rock instrumentation. Music director Steven Greenfield sets a cracking pace for his seven-member combo, so at least the score hustles the action along briskly enough to mask any gaps in narrative logic or plausible characterization. This sense of velocity is much helped by set designer Sarah Mabberley’s fluid mise en scène – a jumble of crates and benches that are constantly reconfigured to become anything from a school locker to a TV to a tombstone to a sofa to a Lovers’ Leap to a stadium bleacher, inter alia.

No trace of lyricism here – not in the music, nor in Ken Overbey’s rather callisthenic choreography, nor in the loveless sex scenes. How could there be, given the crass realities of High School Hell? One welcome lapse in the unremitting brutalism, though, comes when Yusuf, as Red Heather’s ghost, breaks into a graceful series of balletic arabesques while her mourners intone lines from her eloquently forged suicide note.

But then, right after this eulogy, she resumes her characteristic slouch and pout.