“Opera Warriors” is set in the heyday of such demons, the early 1900’s, the “decadent” Nationalist interregnum between the fall of Imperial China and the rise of the People’s Republic. The plot centers on a trio of brothers who train as traditional actors. The eldest (Xie Haibo) plays cavalry generals, the most acrobatically demanding roles in the opera repertoire. The handsome middle brother (Ren Zhongjie) specializes in dazzling hand-to-hand combat duels. Black Bean (Lu Jianfei), the youngest and least talented of the three, is a mere tumbler. Yet he nevertheless wins the heart of the opera troupe-master’s winsome daughter, Swallow (Yang Xuan). 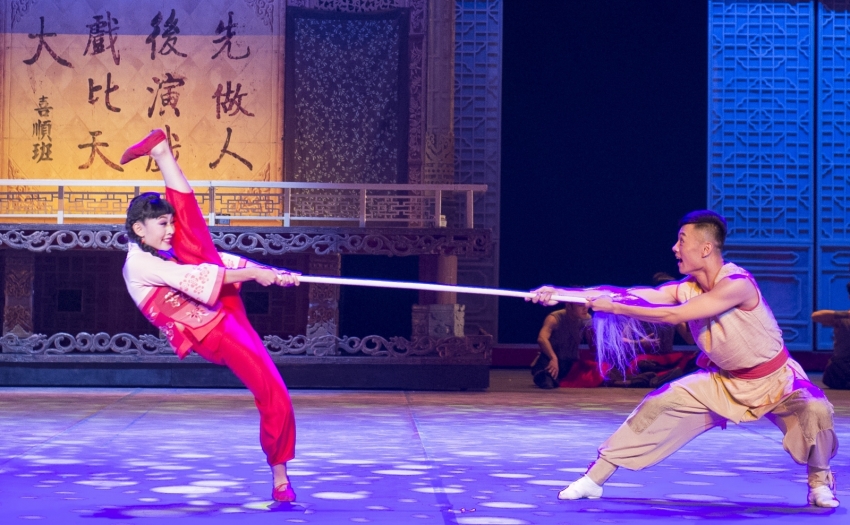 Black Bean courts Swallow under a banner of opera troupe's motto: "First build character, then stage the play; the stage is wider than the heavens."

The opera trainees undergo a regimen of visibly excruciating (yet kinkily graceful) contortions, interspersed with frequent beatings by their master. Their masochism pays off; by Act Two, they’ve attained star status. Second Brother’s onstage virtuosity wins him a backstage tryst with the mistress of a sinister tycoon whose henchmen, in revenge, murder both elder siblings and attempt to kidnap Third Brother’s sweetheart.

To thwart the abduction, the opera master has no choice but to disband his troupe and hang himself, after first confiding his daughter and his artistic lineage to Black Bean. The dispirited disciple clumsily performs his stilted warrior routines before scanty and scornful audiences, comforted only by the steadfast devotion of Swallow and her pet monkey. But then, watching the monkey gambol with its wild, forest-dwelling confreres, Black Bean devises a new, more naturalistic (not to say simian) style of movement. This he embellishes into what the program note describes as “the lively and mighty ‘Monkey King’” school of opera.

The takeaway message: despite setbacks, China’s ancient and invincible “spiritual civilization” can achieve anything – even innovation – through diligent hierarchical discipline.

Corny and didactic though it may be, the story line provides a framework not just for stunning acrobatic stuntsmanship, but also for some emotionally pitch-perfect dance. With a cast equally fluent in the (illusory) naturalism of Western ballet and the stylized gestures of Peking Opera. Choreographer Xing skilfully plays upon the contrast of the two styles.

For instance, the elder siblings’ death scene. It starts with an opera rendition of a warrior champion sent on a suicide mission, but then morphs into a sort of checkmate montage of the brothers and their assassins playing out a menacing endgame amidst a crush of dancing rooks. Or the torrid tryst amidst the backstage wardrobe; an almost palpable sense of rustling silks on tingling flesh. Or the tycoon’s black-clad gangster henchmen swarming en masse like a cancer.

Composer Fang Ming limns all this action with an unremitting tone poem of a score. The lush orchestration, Wang Jinghua assures me, “grows on you, like a fine wine.” Maybe so, but at first hearing I thought it cloyed a little, like Chinese loquat flavoured cough syrup.

One of the most affecting – and least orchestrated – moments of the production came in the penultimate scene when Black Bean, at the humiliating nadir of his career, retreats to the forest. There, stripped of his brocaded costume armour, he gradually sheds his stiff, operatic poses to mimic the monkeys’ antic, free-flowing body language.

This might have made a satisfying climax to the story, but then we’re offered a grand finale with Black Bean now at the head of a new opera company, grimacing and japing in a blonde wig and pheasant plumes. An uninitiated Westerner might be very puzzled to see an impersonation of Liberace blowing kisses.

But Chinese viewers (who comprised about 80% of the opening night audience) would immediately recognize the character as Monkey King Sun Wukong from the classic saga “Journey to the West.” This protean demigod has the handy knack of transforming each of his hairs into a clone of himself. The apparent kiss-blowing, it turns out, is just Sun Wukong inspiriting his whisker trimmings with his immortal breath to launch them forth as an invincible, world-beating monkey army.

That could stand as a fair metaphor for the ambitious and confident rising power that sends forth a lavish production like “Opera Warriors” as a global calling card. “China’s a huge country with many people, lots of talent,” Wang Jinghua points out. “As long as we creatively keep up with the times, the world will surely welcome what we have to offer.”

Love and death intertwine in Blackbird Theatre's "The Rivals"