TV Industry in a Charitable Mood at Canada for Haiti Fundraisers 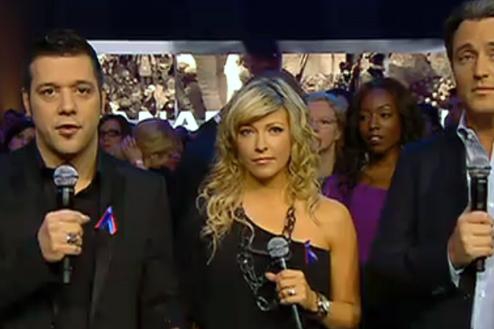 In an unprecedented spirit of collaboration, the big three Canadian television networks put aside their petty grubbing for audiences and advertisers, and devoted one hour of precious prime-time to Canada for Haiti (Friday, January 22). The telethon, simulcast on CBC, CTV and Global, was hashed together to raise money for the small Caribbean nation, wracked by a 7.0 magnitude earthquake on January 12.

South of the border, the more star-studded Hope for Haiti Now ran for two hours on the five major U.S. television networks: ABC, NBC, CBS, CW, and FOX. Every Hollywood A-lister was enlisted: there were performances by Bruce Springsteen, Madonna, Sting, and Justin Timberlake, and conspicuously-scripted speeches by George Clooney, Nicole Kidman, Brad Pitt, Tom Hanks and Leonardo DiCaprio. (You know an event has star power when the likes of Julia Roberts, Mel Gibson, and Jack Nicholson are manning the phone lines!) The only sour notes were Anderson Cooper’s awkward attempts to speak French to Haitian orphans, Beyonce recycling the version of “Halo” she sang at Michael Jackson’s funeral, and a trite rendition of “Lean on Me” by Sheryl Crow, Kid Rock, and Keith Urban.

Like their Canadian counterparts, the celebs on Hope for Haiti Now received no identifying labels or applause, and there was, mercifully, no plugging of upcoming films and albums (although all of the songs are available for purchase on iTunes). The superstars who donated their time and talent to both shows chose their words and music carefully, appropriate to the seriousness of the catastrophe - unlike the shameless showmanship seen previously at concerts for peace, climate change and other trendy causes.

The television community has a long history of sanctimony when it comes to charity (namely, cheap cloth ribbons and insincere speeches at award shows.) So it was refreshing to see this typically self-serving industry respond with cooperation and compassion for a worthwhile cause.

To date, over $9.4 million has been raised by Canada For Haiti. Donations can be made until February 12, 2010 and will be matched dollar-for-dollar by the Canadian Government. Visit canadaforhaiti.com or phone 1-877-51-HAITI. (Donations benefit nine non-profit groups: Canadian Red Cross Society, Care Canada, Free the Children, Oxfam Canada, Oxfam Quebec, Plan Canada, Save the Children Canada, UNICEF Canada, and World Vision Canada.)