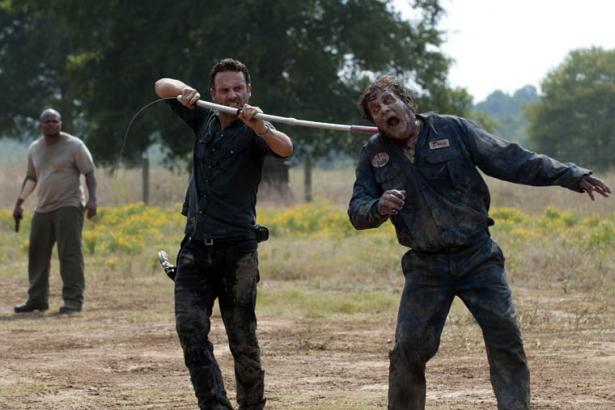 Imagine waking up one day and realizing that the whole world has gone to sh*t. Your loved ones are dead, governments have fallen, there’s no more fuel or electricity….oh yeah, and the country is crawling with vicious, flesh-hungry zombies.

It’s a version of the world many of us can’t wait to escape to again this weekend, with the long-awaited return of AMC’s zombie-thriller television series, The Walking Dead. Millions of fans will be tuning in for the upcoming midseason premiere Sunday, February 12, left hanging after a dramatic final episode before the holidays.

The critically acclaimed program, based on Robert Kirkman’s popular comic books, captured a number of awards and nominations before entering its second season. And for good reason — it’s an edge-of-your-seat thriller that draws viewers in with its focus on human emotion and dialogue.

Why the zombie obsession?

But why is it that our society is so captivated by zombie sagas? What’s with the morbid fascination over death, gore and chaos? What is the real attraction of these post-apocalyptic storylines?

It seems part of it has to do with the relative believability of the zombie disaster scenario.

Ok, I know that might sound a bit ridiculous. Zombies aren’t real (yet).

But you’ve got to admit, there’s something about the zombie narrative that hits a little too close to home. In a world where catastrophic disease and bio-warfare are legitimate fears, an epidemic of apocalyptic proportions is not too far a stretch.

And unlike other sci-fi or horror stories, where the villains are hellish demons or evil monsters from outer space, the zombie world puts a frighteningly familiar face on the adversary. It’s no longer “us versus them”…this time, the enemy is the girl next door, your grocer, your dentist, or even your own friends or family.

There are two opposing perspectives on the zombie “epidemic”, both of which are made quite clear in the show. One side sees the “walkers” as a lost cause—once you’re bit, you’ve got to go. It’s a bullet through the head, or you risk endangering the precious lives of the remaining survivors.

The other side however, sees the zombie population merely as “sick” people, in need of compassion and a cure. This ongoing debate calls our whole sense of what it means to be alive into question.

What’s particularly interesting about The Walking Dead is its focus on the human struggles—the characters’ relationships and the degradation of accepted ethics and values. While some zombie stories give priority to bloody battles with the undead, the series gives viewers a real glimpse into the psyche of the survivor.

The show follows a rag-tag group of the living, people who have banded together out of desperation, constantly moving to stay one step ahead of an ugly fate. Led by courageous cop Rick Grimes (Andrew Lincoln), the characters’ beliefs and morals collide in their constant mission to find safety.

There’s little revealed about the group’s lives before zombies. Aside from three or four main characters, we don’t know what their occupations were, how they lived or what they cared about. Now, nothing matters but survival.

And even though most of us have never experienced such dire circumstances, we relate to these characters because we believe that in their situation, we’d likely be feeling exactly the same way. Maybe it’s because we’re so familiar with zombie tales, or maybe it’s because we’re just taken in by the thrill of survival stories. But for whatever reason, our reaction to seeing these things on screen is often to consider what we would do in the event of a terrifying zombie attack.