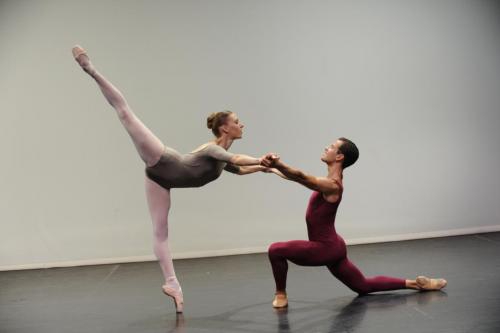 A group of dancers gathered in front of the ballet bar that runs the length of the airy rehearsal space above Davie Street. They chatted softly, laughing and unfurling long limbs as they took advantage of the pause in their hectic schedule. Roberta Baseggio, Artistic Director of Vancouver City Dance Theatre (VCDT), walked towards me, hand outstretched, gliding across the floor with the kind of studied grace that comes only with years of training. She smiled sweetly, almost girlishly, and welcomed me to the studio.

Since July 19th VCDT, Vancouver’s newest professional ballet company, has been rehearsing for their debut performance, The Dali Universe. Founders and co-directors, Roberta Baseggio and her husband Enrico Sorrentino relocated to Vancouver from Tuscany three years ago. VCDT is a family business; not only are Roberta and Enrico business partners but their oldest daughter will have a small role in Dali.

The idea of starting a dance company was inspired by a trip to London last summer. They envisioned a model that would bring together different disciplines, uniting the performing and visual arts with modern technology. Their style draws on a base of classical ballet fused with elements of contemporary dance. 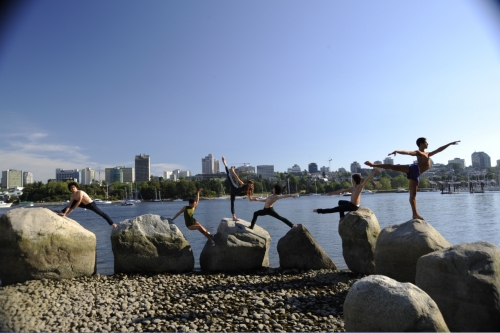 VCDT adds a touch of drama to the city skyline.

Baseggio, who choreographed Dali Universe, began dancing at the tender age of five and has studied with Victor Litvinov, Margherita Trayanova and Diana Ferrara, the former Etoile of the Opera Theatre in Rome. Baseggio has clearly never tired of the art. She only half-jokingly described dancing “like a drug” and although she has now taken on the role of Artistic Director, she is still very much the ballerina. Throughout our conversation she remained standing, spine perfectly straight, never once looking fatigued.

Sorrentino, a slight man with softly greying hair, practised medicine in his native Italy, with a specialty in hypnosis. He downplayed this role, explaining that it is too narrow to encompass his wide-ranging interests and preferred instead to be described simply as a thinker. Sorrentino spoke with intensity, leaning in towards me as he expressed his vision for the company, and of the role of the arts in creating integrated communities. He’s in charge of the “philosophical side” of their venture, his wife told me.

In Vancouver the couple saw the opportunity for a new Renaissance city, a 21st century version of the most famous period in Florence’s history. “Our desire was to establish a new company with new values, new principles,” explained Sorrentino. “Arts have the possibility to express important values. One of the values that the humanities need is multiculturalism. Multiculturalism expresses the history of the people and the history of the people is the base for their future.”

After a thorough search for a country that best embodied diversity, Sorrentino and Baseggio settled on Canada, which Sorrentino describes as a world laboratory for multiculturalism with Vancouver as a key location.

“The city has many different cultures and communities but they are totally atomized, they are separate, they are not integrated. We have all the basic elements of multiculturalism but we have to create a synthesis,” Sorrentino said. A stronger emphasis on promoting the arts and dance in particular, would provide opportunities for various communities to work together, he said.

Still, the couple knows that they have a hard road ahead of them. Well deserved or not British Colombia has a notoriously bad reputation for failing to nurture its artists. They seem all too aware of this potential stumbling block when I raise the issue. “In Vancouver we have all the ingredients, but at the same time, from a cultural point of view Vancouver is quite empty. It’s a space, it’s a frame,” Sorrentino said.

Baseggio jumps in to point out that, “It’s a young country, it’s a young city. We are striving to build something here.”

As if on cue, one of her dancers leaps into action behind us, studying his reflection in the mirror as he adjusts his form.