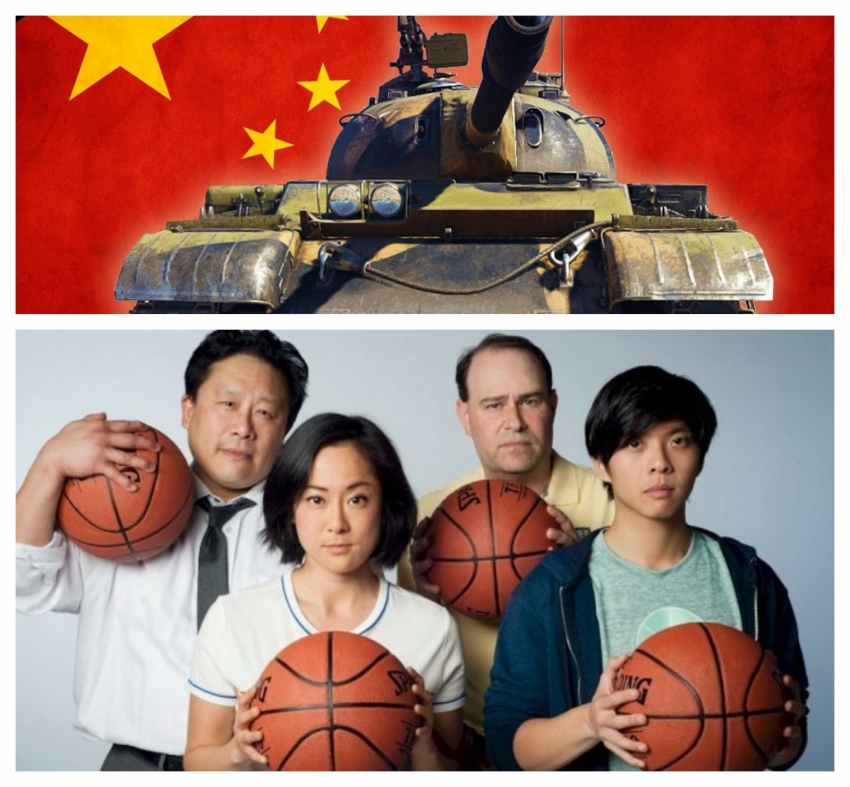 For the Canadian premiere of Lauren Yee’s Great Leap, Arts Club Theatre has mounted a full court press of top talent on its Goldcorp Stage.

Set designer Heipo Leung has reconfigured the black box venue into a Vee-shaped arena with steeply raked seating rising like stadium bleachers on either side of a blank white stage. Lighting designer John Webber’s spots swivel overhead as though in a looming Jumbotron that blares crowd noise and sound designer Alessandro Juliani’s raucous score. When the music falls silent, the snappy dialogue is often punctuated with the almost metabolic throb of dribbling basketballs.

The blank stage space is continuously carved up and redefined by the shifting moiré of projections by Taiwanese-Canadian “interdisciplinary media” warlock Sammy Chien and his Chimerik 似不像 design collective. Now it’s a San Francisco back alley, then a practice gym, or a 15th storey walk-up Beijing studio apartment, or Tiananmen Square at the crest of the 1989 Democracy sit-in, or the runic scrawlings of a coach’s playbook.

And always, recurringly, the key-and-circle pattern of the classic basketball court, zoomed in for interpersonal drama or zoomed out for birds’ eye context. Director Meg Roe peoples this layout with an all-star team of players perfectly cast for the four roles of the script.

Milton Lim is a cocksure Chinatown street kid who won’t take ‘no’ for an answer to anything. We meet him fresh out of the funeral of his China-born single mother with whom he’s shared nothing – not even a common language – except for a single-minded obsession with basketball.

Still in his mourning suit, he’s slipped in through a back-door do bamboozle the braggadocious has-been coach (Toby Berner) of a local college team to sign him on for an exhibition game in Beijing. The “friendship” match is the coach’s last hope to hang onto his college berth on the heels of a long losing streak.

The only reason he’s been asked to Beijing at all is “for old times’ sake.” He happened to be the random American dragooned to train a Chinese team in one of the first sporting exchanges back in 1971, at the height of the Cold War and the twilight of the Cultural Revolution, during the earliest tentative feeler phase of U.S./China “ping-pong diplomacy” rapprochement.

His Party-assigned translator at the time (Jovanni Sy) struggles to fathom the American “expert’s” profanity-laced screeds and to reconcile the coach’s thrusting win-at-all-costs credo with his own Cult Rev survival instinct of self-effacement. The translator’s shocked: How can you deliberately distract your opponents or try to hog the ball “when it’s not even your turn?” The implacable answer: “It’s always your turn.”

Nevertheless, a bond develops between them – so much so that the departing American even nominates the translator to take over as coach of the Chinese team and offers him ribald advice on how to romantically approach a grandstand groupie.

Now, 18 years later, the American – sadder, but not much wiser – is  headed back to Beijing with a Chinatown ghetto runt in tow as his point guard. And neither of them have any idea about the evolution of Chinese basketball or society or politics in the meantime. At least not until they’re clued in by the street kid’s feisty elder “cousin” (Agnes Tong), who’s logged in an exchange semester in Beijing as part of her Asian Studies grad school.

Before she’ll let her cousin fly off, she exacts the coach’s pledge to shield the kid and all his team-mates from the mounting turmoil of that super-heated Chinese summer. So on the bus into Beijing, he gives the team his own, impressionistic, Yiddish-and-profanity-laced cautionary briefing on the fraught politics of the hour and why they need to stick to the straight and narrow bath between their hotel and the stadium.

Too late to rein in the point guard, though. In line with his street-smart wont, it turns out he’s already bolted the bus and made it to Tiananmen (evoked by a frenetic projected montage of heart-rending 1989 footage), where he’s glad-handing student strikers.

Which makes him non-grata to the Party pooh-bahs assembled to witness the Americans’ humiliation by a squad of specially culled Chinese seven-footers. The kid has to be pulled from the game at the last minute. It falls to the Chinese coach, the erstwhile translator, to present this demand to his U.S. counterpart.

Confrontations ensue. All four characters learn inconvenient, but liberating, truths about themselves, each other and even that long-lost grandstand groupie. And meanwhile the tanks roll in Tiananmen.

All four actors inhabit their roles so snugly that they seem born to this script. They can snap Yee’s smart and funny dialogue across the court with all the coordinated hustle of a seasoned squad. And yet they each can pull back to stand out in individual relief as nuanced, complex characters.

Under all that wise-guy bravado, Lim presents glimpses of a teenager adrift on a driven quest to find out who he is and where he can fit in the world. Sy’s patent mix of bonhomie and stilted reserve earns plaudits when he bravely faces up to the risk and uncertainty of post-Tiananmen China with the a new understanding that it is always his turn, after all.

Berner, the perennial bold-faced loser, somehow emerges a winner just by daring to double down and stay in the game. And Tong, who’s had a whiny edge to some of her recent “woke” women roles, here emerges compassionate and wise without losing any of her leonine fierceness.

The play couldn’t be timelier, rounding on the 30th anniversary of the Tiananmen demonstrations and the 100th anniversary of China’s seminal May 4th Movement, not to mention the 50th birthday of the People’s Republic of China. The Great Leap runs at Arts Club’s Goldcorp through May 15. Book your courtside seat to cheer on this slam dunk.