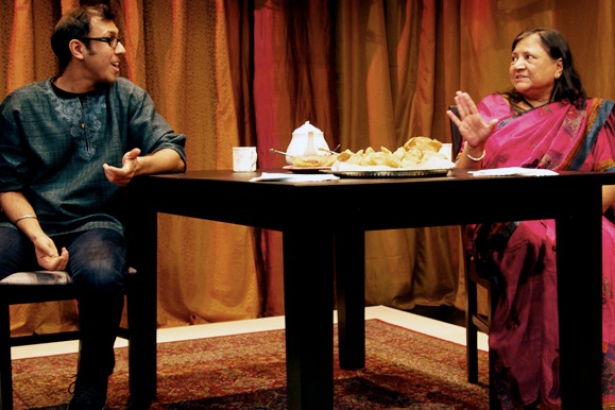 Warm, humorous and thought-provoking, "A Brimful of Asha" brings audiences into the life of a traditional Indo-Canadian household, reflecting on the many challenges surrounding marriage.

Why Not Theatre performer Asha Jain and her real-life son, Ravi, embody the inter-generational clash experienced by many immigrant families across Canada. Their appearances are evident even at first glance: Asha wears a bright fuchsia traditional Indian dress, while Ravi appears onstage in a more Westernized shirt and blue jeans.

Their drama begins when Ravi’s parents announce that they will take him on a surprise trip back to India. Unbeknownst to Ravi, his parents are concocting the most outrageous plans to find him a proper Indian bride.

The Toronto-born Ravi prefers to take his time to meet someone on his own and get married. But Asha is convinced her 27-year-old son is already ripe for marriage, and that there isn't any more time to waste.

Asha vehemently believes her own life path is one that Ravi should follow. In her youth, Asha's widowed mother arranged for her to marry an Indian expat living in Toronto, and even though she had career plans, she quickly left India to start a new life in Canada. Her mother had found a suitable partner for her, and she accepted their choice.

Ravi wants his family to leave him alone, and suggests his mother to tell her relatives to mind their own business, but in India, marriage is a collective affair that involves even extended family members.

Suddenly, Ravi sees himself attending a series of family meetings, lavish dinners and dates with potential wives, all without his prior consent.

Ravi deals with it the best he can, but his parents put his devotion to test. Both Ravi and his parents admit feeling "stuck in between two cultures." Can they find a way to meet halfway?

Ravi and Asha Jain (who have been performing the show since 2010) deliver a delightful story with hilarious dialogue and story developments, keeping  the audience on the edge of their seats. There is not a dull moment with these actors, and the 90 minutes in the play passes very quickly.

A Brimful of Asha is playing at the Arts Club Revue Stage in Granville Island until Feb 8 at  8:00, Sat 2 p.m. For more information, please visit Revue Stage's website.