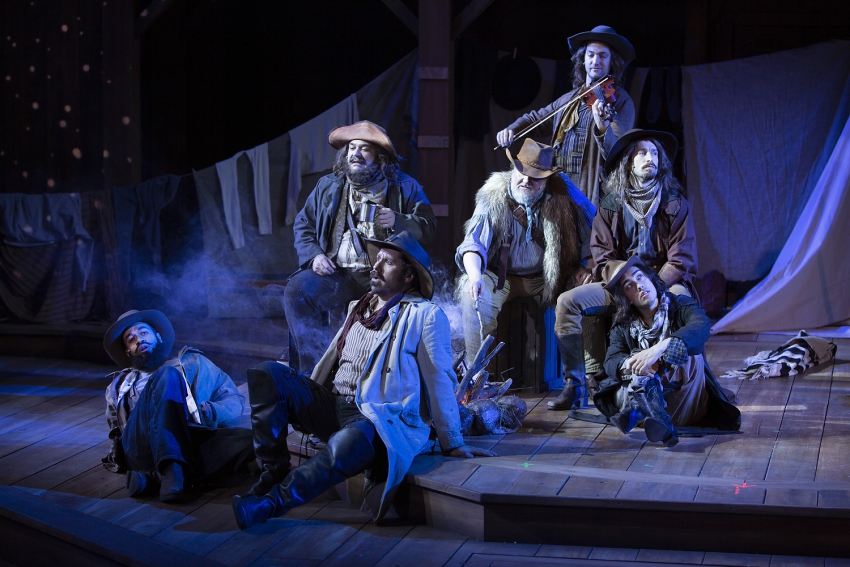 Petruchio serenades his Kate @ their Home on the Range. Photo: Tim Matheson

No wonder Shakespeare’s Taming of the Shrew, which features all of the above and was once one of his most-performed comedies, has waned in popularity throughout the rise of Feminist “waves” 1-4 over the past century.

What are we to make of the play’s final scene, where Katherine (aka Kate), the titular “Shrew,” having been “tamed” by the above-adumbrated psy-ops, pledges her “love, fair looks, and true obedience” to her madcap husband, Petruchio? Is this the zombie wheeze of a broken spirit? Or a Stockholm Syndrome of extravagantly excessive gratitude for miniscule mercies?

Or could it possibly be that Kate and Petruchio have actually managed to “battle, spar and provoke each other until, exhausted, they discover that they are stronger together?” That’s how director Lori Anderson chooses to interpret it, according to her program notes for this year’s Bard on the Beach production.

Anderson brings it off, against all odds. She’s got a couple of factors going for her. Brilliant casting, for starters, especially the central duo. We first meet Jennifer Lines’ Kate as a spitfire harridan lashing out at the stifling decorum of her social and family milieu. She’s so entrenched in her pariah persona that she’s stunned speechless when Andrew McNee’s Petruchio declares her, in their initial encounter, to be “pleasant, gamesome, passing courteous… sweet as springtime flowers.”

He’s not jiving, either, although he’s by no means averse to contra-factuals and had rehearsed a whole repertoire of jive to prep for this interview. He boasts, before the meeting, that he’s faced down lions, tempests and cannonades and is not about to be daunted by “a woman’s tongue.” Yet, when actually face-to-face with Kate, he forgets all his pre-planned lines. He blinks bashfully and stammers before the opening salvos in their battle of wits.

None of these affects are explicit in the text. If anything, they run directly counter to the explicit tenor of the written words. Yet it’s precisely this contradiction of the physical theatrics of the production versus the language of Shakespeare’s text that allows Anderson, Lines and McNee to transform Taming of the Shrew from a torture-porn saga of brainwashing into “a complex love story” (again quoting the program notes).

Then, too, the Wild West décor of the production helps emphasize the disconnect between the hidebound conventionality of Kate’s native Padua (here portrayed as a boosterish new-fledged Gay Nineties boomtown imposed upon a wild and wooly frontier) versus the outlaw freedom of Petruchio’s desert encampment.

Set designer Cory Sincennes makes the most of this contrast, cramming the town scenes with banners and bunting and fussy Victoriana, while festooning the camp scenes in washlines of scruffy unmentionables. Costume designer Mara Gottler plays along, too, draping the Paduan worthies in tuxedos and crinolines, while tricking out Petruchio’s gang in a gallimaufry of randomly scrounged oddments. And gradually we witness Kate shifting piecemeal from one style of dress to the other, breathing a little easier with each costume change.

Notable supporting players stand out from these picturesque tableaux. Joel Wirkunnen, as Petruchio’s clownish sidekick is the only character exempted from iambic pentameters; he spiels out his free-form prose with a Gabby Hayes rasp.

Rivals though they may be, all three agree to support Petruchio’s courtship since the girls’ moneybags parent (here recast as an ageing dowager, Susinn McFarlen) has decreed that the younger sister can’t be pursued until the “shrewish” older one is already married off.

The younger two suitors disguise themselves as household tutors so as to secretly woo Bianca in the meantime. In the process, Lucentio switches places with his wise guy servant (Chirag Naik), whose overly crafty stratagems sew confusion all around. Finally Hortensio bows out and decides to marry a moneyed widow (sultry, sulky Ghazal Azarbad) instead, leaving the way clear for Lucentio to claim Bianca.

Kate and Petruchio ride in from their own bumptious “honeymoon” just in time for the double wedding, setting up a little sporting proposition among the three new bridegrooms as to whose wife can prove most biddable. Kate, of course, wins. Which brings us back to that problematic peroration in the last scene.

Once more, we’re saved by the contrast between physical theatrics and the scripted text. A handy feature of the Wild West theme is that Anderson can get away with plenty of gun smoke. Kate came in with a “bang,” shooting up the trophy table of a July Fourth bake-off back in Act One, and she again deploys her Fire Stick to make her exit.

Even as pronounces herself “ashamed that women…seek for rule, supremacy, and sway/When they are bound to serve, love, and obey,” we see her circling about the stage with a six-shooter concealed behind her back like a pair of crossed fingers, as though to tip us off that she doesn’t mean a word of what she’s saying.

And as soon as the duo collect their wager winnings, they back out of Padua, guns blazing, to return to their outlaw redoubt in the untamed desert.