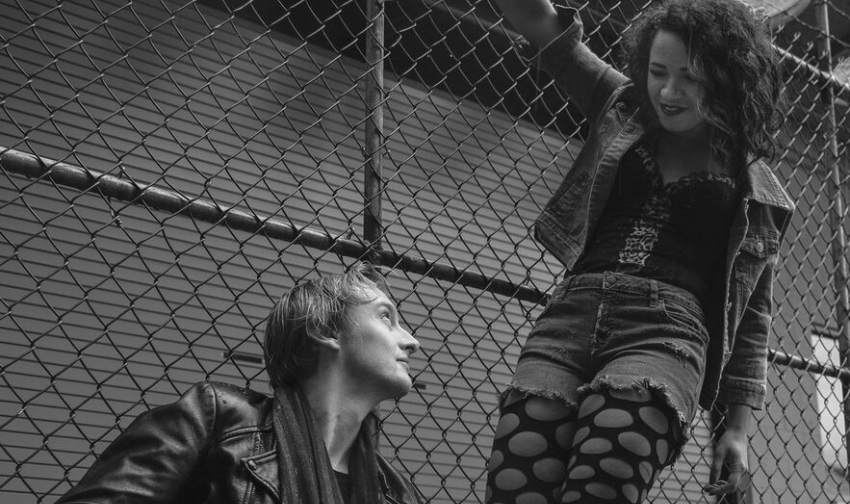 After a two-year hiatus, Richard Berg’s URP Event Productions is back with another musical, the 24th in its 21-year history. The 15-member cast of Rent more than fills the stage of North Van’s Centennial Theatre.

The set, by the way, was co-designed by Berg himself, who also directed the production. His co-designer on the set was Robert Sondegaard, who also designed the smoky, multi-hued mosh pit style lighting effects.

It’s not just the grungy aesthetic, though, that sets this show apart from URP’s mostly slick prior repertoire of upbeat Broadway glitz.

Rent, overshadowed by the plague of AIDS (rampant and considered incurable in 1980’s Alphabet City), is hardly an unalloyed comedy. In fact it’s barely even a musical, since it has no spoken dialogue “book.” Rather it’s an opera, a series of arias and ensemble pieces strung together by incantatory recitatives.

Not just any opera, either, but a 20th century reimagining of Giacomo Puccini’s classic La Bohème. The parallels are handily pat. For Belle Époque Montmartre, read East Village; for tubercular consumption, read HIV; for absinthe read the whole pharmacopeia of modern recreational drugs.

The show’s creator, Jonathan Larson, who wrote the music and lyrics and workshopped the script for years, lived most of his short adult life as an aspiring artist in the hand-to-mouth, gender-fluid creative ferment of Alphabet City.

He died (of an undiagnosed genetic disease) on the eve of Rent’s Off-Broadway premiere in 1993. The show opened to raves, moved to Broadway and ran for 12 more years.

But, for non-professionals, translating Puccini’s florid score into a 1980’s rock idiom is no cinch.

The plot turns upon a pair of doomed, star-crossed lovers Roger and Mimi. The chemistry between the URP production’s co-stars, Darren Adams and Ali Watson, is convincing enough for sparks to fly. If anything, they’re a bit too energetic, almost over-amped (sometimes literally, thanks in part to Berg’s personal oversight of the sound design).

The co-stars tend to belt, rather than sing, their numbers. That makes for a charismatic spectacle – further enhanced by Shelly Hunt’s brisk choreography and the cast’s impressive terpsichorean talent. But so much growling, vibrato and vocal fry gets in the way of emotional nuance and sheer narrative coherence; problematic when there’s no spoken dialogue to take up the slack.

The third co-star Nick Heffelfinger escapes such pitfalls, partly thanks to the nature of his role (a nerdy film-maker, Larson’s onstage alter-ego, who doubles as the story’s narrator).

A highlight of the evening is his duet with his frenemy Emily Canavan, in which they dance a slashing tango while deploring the caprices of their shared bisexual girlfriend.

The subject of these laments, mercurial Maureen, is played with witchy/bitchy allure by Synthia Yusuf.

Two other supporting roles come close to stealing the show: Kurtis D’Aoust as the leggy drag queen Angel and basso Chris Olson as his stocky, burly boyfriend Collins. Aside from his dancing drollery, D’Aoust demonstrates an amazing ability to switch at will from a ringing tenor voice to a tremulous contralto.

The pair has more than just vocal versatility, though; they’re equally adept at shifting emotional registers, too, from their campy set pieces in Act I to their tragic centrality in the solemn ensembles of Act II, when Angel dies of AIDS.

Ensemble numbers, studded throughout the show, are where the URP team and Larson (and indeed Puccini originally) shine at their best. Berg and Hunt harness the cast’s abundant brio to produce euphonious spectacles of disciplined dazzle.

No wonder the company has earned a reputation as Vancouver’s own home grown incubator of world-class musical theatre talent. Expect to hear more of them, jointly and severally.