Corporations in our Heads 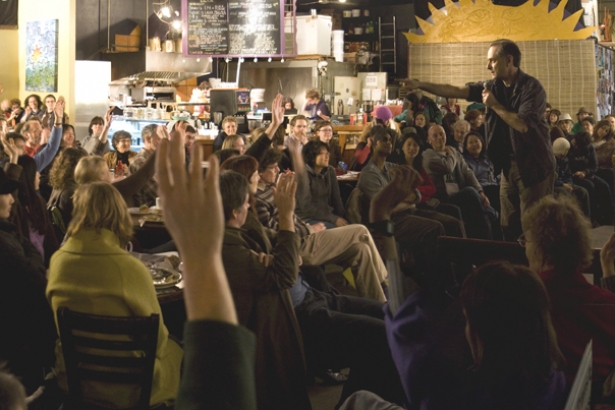 Recently, I was invited to the Vancouver kick-off for Corporations in our Heads, a thought-provoking play about the messages that corporations send us and manifest within our collective psyche. Presented by Theatre for Living (formerly Headlines Theatre), it's a grassroots effort with a unique and fun proposition: Theatre without a net. No actors. No play. No script.

The sold-out crowd witnessed Creative Director, David Diamond, ignite the audience with questions about what it means to us when we allow ourselves to be inundated with corporate messages. He invited the audience to think about a personal story resulting from corporate messages that affected them in a negative and unhealthy way and guided them with physical warm-up exercises.

He invited three audience members on stage to tell us about their own personal stories and then we voted on the one that resonated within us the most to act and flesh out: the first one was about a young twenty-something female who walked into an American Apparel store and was overcome at the destructive body image messages she experienced. She became overwhelmed at the messages from both her own boyfriend's reaction to any girl wearing tight pink pants that she broke down at the sight of the "pink pants". The pink pants were a physical representation of the decay of her own self-esteem.

The second audience member told a story of her seemingly un-compassionate housing co-operative's move to raise its fees and that she could no longer feasibly support her family. The third audience member told us of the installation of the BC Hydro Smart Meter in her home and how she was quite upset at having to allow BC Hydro purportedly invade her privacy and her subsequent refusal to pay them. The audience unanimously voted to tell the story of the young girl and the corporate media messages of how she "wasn't good enough". She was indeed very cute and told a dramatic story while the older woman with her BC Hydro story seemed to be flustered and not pay attention to her cues and provided the audience with much needed comic relief!

It seemed that many of the audience could relate to not feeling beautiful or good enough and though the subject was heavy, it was very fun! David charmingly invited us to enter a metaphorical space where we look critically at the corporate "voice" that is created and occupies our thoughts.

As an audience member, you will come away with a renewed appreciation and a more critical engagement with the corporate messages we are inundated with. It's cathartic and provocative.

Corporations in our Heads tours British Columbia and Alberta until December 8. For more information on this incredible theatre experience, visit Theatre for Living.