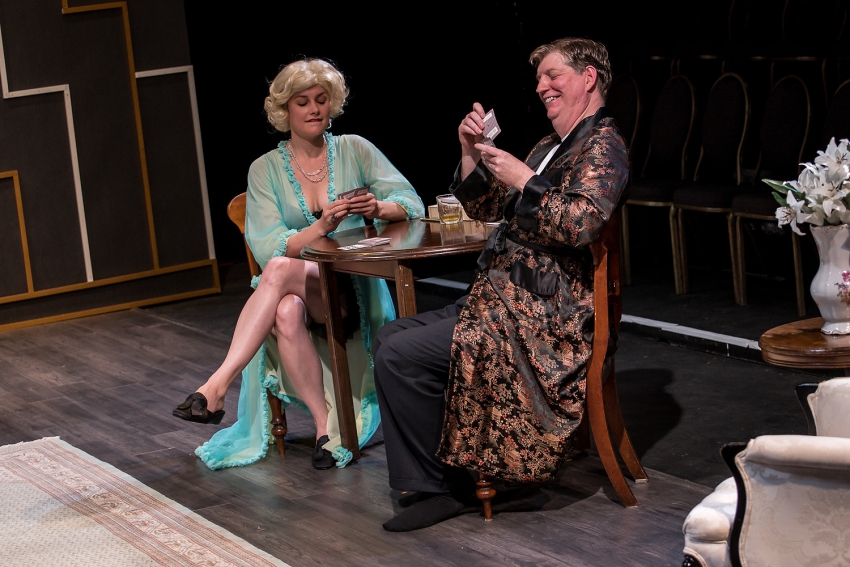 Kingpin and Moll; be careful what you wish for. Image: Zemekiss Photography

Never mind Stratford; forget about Ashland. Without even venturing beyond Point Grey, you can relish the charms of a Repertory Theatre Festival – the lawn picnics, the resonant interplay of classic scripts, the nightly reshuffle of stellar acting talent into intriguingly disparate roles.

It’s all there, in affordable and digestible doses, in the 7th annual summer season of the Ensemble Theatre Company (ETC) at the Jericho Arts Centre. We took in the whole 2019 roster – Michael Healey’s The Drawer Boy, Garson Kanin’s Born Yesterday and Tracy Letts’ Superior Donuts – on successive nights.

That, if you can manage it, is a good way to highlight the synergies between the plays. All three ponder how to reconcile loyalty with liberty, or hope with hard-earned realism. And all three plays are period pieces, each bearing a distinctive generational stamp.

“Boomers” and Gen X intersect in Superior Donuts; Drawer Boy and Born Yesterday home in on the “Greatest Generation,” the cohort that reshaped North American life after the traumas and triumphs of World War II. But, as depicted on the ETC stage, embodiments of the post-War generation hardly come off as “Great” or heroic.

Healey builds Drawer Boy around a pair of bachelor farmers who come home from the killing fields of the European Front to claw a precarious living out of the stony soil and skewed agricultural markets of Southern Ontario. Kanin, in Born Yesterday, focuses on “farming” of another kind: a gauche junkyard magnate bribing his way through Washington, D.C., for an inside track on post-War scrap salvage deals.

Director Alan Brodie paces Drawer Boy with a stolid down-home taciturnity, confining even the production’s soundtrack to a few expressive guitar riffs (by composer Michael Chambers) between scenes. In Born Yesterday, by way of contrast, co-directors Shelby Bushnell and Michael Scholar turn loose costumier Julie White to trick out the nine-member cast in campy period flash so that choreographer Erika Bab can jiggle and jounce them non-stop for nearly two hours to the brisk beat of sound designer Rick Calhoun’s Jazz Age score.

Yet both shows boil down to a similar story arc: a dominant kingpin lords it over a submissive life-partner until an outside interloper comes along to free up the underling’s cowed imagination.

In the opening scenes of Born Yesterday, all eyes focus on the eerily prescient figure of a bullying parvenu tycoon (Paul Herbert in a pointedly Trumpian portrayal). But he gets more than he bargained for when he turns over his trophy bimbo (Alexis Kellum-Creer) to the tutelage of an idealistically nerdy journalist (Tariq Leslie) for a remedial crash course in tonier Washingtonian manners and values. We cheer for Kellum-Creer as she evolves from a lisping, bibulous ditz to a voracious bookworm and pithy homilist, schooling both her loutish sugar-Daddy and her priggish tutor along the way.

But those same fables, as re-enacted by Lam’s Little Theatre group, somehow rekindle Angus’ long-suppressed memory. This transformation (breathtakingly performed by Gill) forces all three characters to come to terms with the hard facts of their lives and their interconnections.

Fast forward a couple of generations to the mean streets of post-industrial Chicago. The erstwhile Polish/Irish ethnic wards of the city’s West Side have by now darkened in complexion, but crime and corruption continue unabated.  Boomer offspring of the post-War “Greats” are already rounding on their rueful endgame, as typified by the slouching figure of Arthur Przybyszewski (David Nykyl), a lonely schlub who takes over his family’s failing donut shop amidst a deteriorating ghetto.

“Cowardice,” Arthur’s convinced, propelled him into years of draft-dodging exile so that he couldn’t even attend his immigrant father’s funeral. Cowardice unravelled his half-hearted marriage and alienated him from his teenage daughter. Cowardice keeps him from rising to the shy come-ons of a lady cop (Kellum-Creer, again) who’s sweet on him.

And cowardice inoculates him against the pipe-dreams of Franco (Chris Francisque), the young, self-proclaimed Great (Afro-)American Novelist  who comes to work for him, “pushing broom” at minimum wage. The motor-mouth kid spins off endless, futile fantasies about how to turn the donut shop into a kind of neighbourhood revival bohemian bistro.

But when loan sharks mutilate Franco and trash his Great American manuscript, Arthur lays everything on the line – his shop, his life savings and his sorry, middle-aged ass – to redeem the kid’s debts, reboot his novel and trounce his gangster nemesis in hand-to-hand combat. So much for “cowardice.”

Director Kaitie Forsyth settled upon her two co-stars after a series of unforeseeable casting contretemps, but the combination turns out to be a fortuitous winner. Francisque’s ebullience is a perfect foil for Nykyl’s stammering self-doubt, right up to the very last scene when the affective polarities reverse.

And Nykyl’s performing history as a professional fight coach turns his climactic bout against another pro, Richard Meen in the role of the loan shark, into one of the most gut-clenching scenes of protracted stage combat I’ve ever seen. For a full 10 minutes or so, the Jericho thrust stage offers us ringside seats on a knock-down-drag-out kick-boxing match. High emotional stakes; everyone in the intimate black box theatre, onstage or off, winds up with a sense of “skin in the game.”