... from the Jaws of Victory 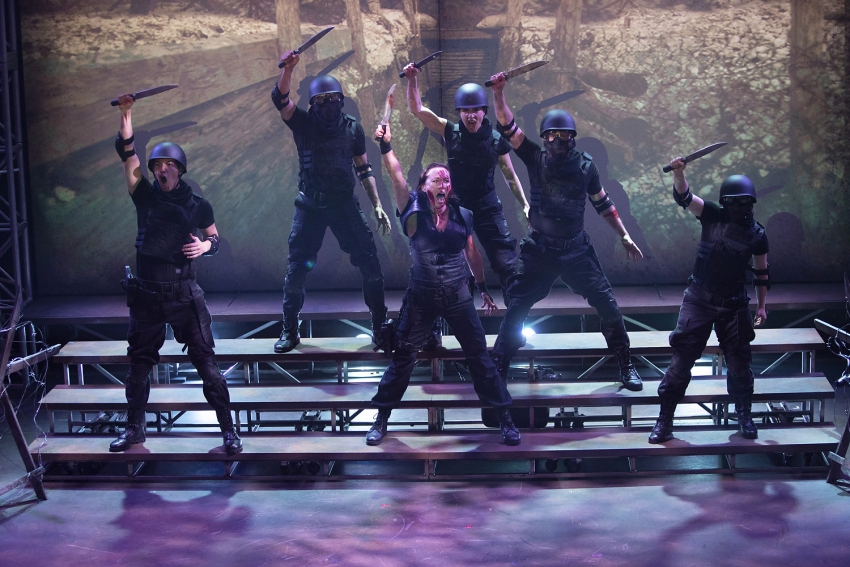 Meet the candidate; how not to run for Consul. Photo: Tim Matheson

A lot of contemporary salience packed into the script of Shakespeare’s late-career tragedy, Coriolanus: 99% starvelings versus 1% hoarders, the crippling blood-and-treasure cost of Forever Wars, the loose cannon of narcissistic sociopathy empowered, the mutability of the voting mob, the uneasy alignment of honour, loyalty and patriotism.

Hard to tease out all these themes, though, in the first-ever Bard on the Beach staging of the play,  as director Dean Paul Gibson has loaded up the black-box Howard Family stage with so much blood-and-thunder that it’s often hard to even hear the lines.

Barely a quarter hour into 140-minute bloodbath, Moya O’Conell, in the title role, was already sweat-slicked, ketchup smeared and sticky with spirit gum scars from the first of many battle scenes. Perched as we were in front row aisle seats, we had to keep our feet tucked in to avoid being clipped by the endless procession of artillery, furniture and props rolling on and off the three-sided thrust stage.

These include state-of-the-art bazookas for the siege scenes, as well bronze age halberds for the mob riots and trendy, modernesque chrome furniture for the domestic interplay between O’Conell and her domineering Tiger Mother (Colleen Wheeler) – all part of the studied temporal and geographic ambiguity of the show’s dystopian “near future” setting.

Projection designer Jamie Nesbitt helps keep things fluid with a constant chiaroscuro of images rippling across the hexi-flexy screens of stage designer Pam Johnson’s barebones, functional set. As we file into the theatre, the screens are filled with a triumphal frieze in honey-colored marble, as befits the classical Roman background of Shakespeare’s script.

The sculptural imagery recurs throughout the production, but more chipped and sooty and graffiti-smeared with each iteration. Spray paint tags also bedeck the dilapidated amphitheater – looks like a domed skatepark – that denotes the public Forum.

On the other hand, the real power centers of the city – the bastions of bureaucracy, the villas of the plutocracy, the spas, the bistros and, above all, the military command hub – are all projected in a brutalist concrete high-rise style, often with colossal statuary peering menacingly into the plate glass windows.

But it’s in the battle scenes that Nesbitt really outdoes himself: mortars and grenades blowing up right, left and center, sometimes in staccato ack-ack bursts, sometimes unfurling in slo-mo like a time-lapse flower, all to the elastic tempos of composer Alessandro Juliani’s throbbing, cinematic score.

And the cast deploys accordingly with the geometrically balletic elegance of a video arcade shoot-‘em-up. They’re all decked out (by costume designer Barbara Clayden) in combat chic fatigues – squadristi black for the Romans and brown, dun or olive drab for their rebellious challengers, the neighboring Volscians.

These uniform color schemes obtain whether in pitched battle or parade drill, right up through the ranks all the way to the military top dogs, Coriolanus and her Volscian arch-rival, Aufidius (Marci House). Except O’Conell and House get a few extra fashion fillips – web-belts a-jangle with murderous cutlery, ribbed leather bodices and jerkins, totemic chokers and amulets, the whole Wonder Woman kit.

The transgenderization of the paramilitary protagonists is perhaps the main innovation of this production. Gibson, in his program notes, credits the show’s fight director and “creative consultant, Robinson Wilson, for that inspiration, and it shows in the hyper-choreographed war game aesthetic of the production.

But there’s more to this gender-switch than just feminized commando flash. Gibson hints at a seemingly Freudian love-hate triangle between O’Conell, House and Wheeler. For all their ordnance and body armor, neither of the G.I. Janes ranks as the toughest woman onstage.