... from the Jaws of Victory

That distinction belongs to the sleek, pants-suited figure of Wheeler, as Coriolanus’ mother, Volumnia. She comes off as a single-minded striver who projects her balked aspirations onto her offspring. So she’s taken aim at Rome’s glass ceiling and, through a process of emotional austerity, weaponized her daughter into a unidimensional battering ram. 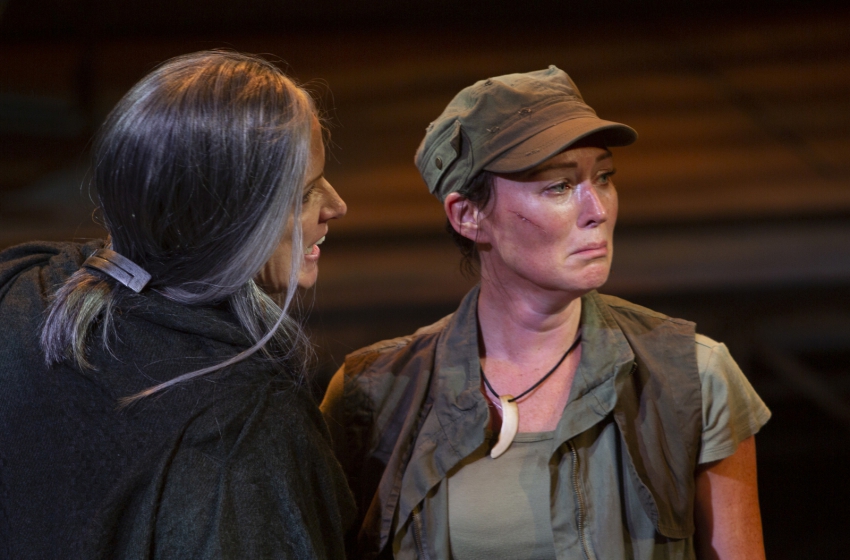 Mother, puh-leeze; I'd rather do it myself! Colleen Wheeler and Moyra O'Conell. Photo: Tim Matheson

So love-starved is their ménage that the two women visibly shrink from even touching each other. But both grasp that, in the Rome depicted here, their shared ambition entails a stone-cold, clear-eyed perception of the city-state’s be-all-and-end-all civic purpose: straight-up Imperium by armed conquest, with no time for any sentimental twaddle about nurturing the deplorable plebeian populace.

Conquest’s a job for an elite, patrician corps of hyper-efficient, affectless military technocrats, and Coriolanus distinguishes herself as the best of them. Such a skill set can buoy her almost to the top of Rome’s leadership heap. But the last rung, the Consulship, proves to be a step too far when she has to vaunt her combat scars before the unwashed plebs to solicit a pro forma vote of confidence.

A pair of populist Tribunes (Craig Erickson and Praneet Akilla) scheme to goad her into betraying her true contempt for the commoners so that, instead of public acclamation, she earns the mob’s voice-vote sentence of banishment (shades of the “lock her up” MAGA rallying cry).

In her chagrin, Coriolanus  finds her way to Aufidius’ exile encampment to offer her services for a revenge strike against Rome. The erstwhile rivals reconcile in a sort of bicurious mating dance that stands out, for each of them, as a highlight of their very strong performances. They agree to share command of the Volscian forces for a siege of their mutual enemy.

But on the very  verge of sacking Rome, the alliance founders. The city’s envoys cut no ice with the implacable Coriolanus, not even her childhood mentor, a self-deprecatingly right-wing “humorous patrician” à la Boris Johnson (although not quite as shambling, in Shawn Macdonald’s acerbic portrayal).

Volumnia, though, fares better by flouting her own take-no-prisoners ethos. She plead for a win-win compromise: Rome to sue for peace (with suitable tribute), whereupon Coriolanus leads the triumphant Volscians home covered in “honor.”

That, however, is not quite how the settlement is perceived back in Volsces, where Aufidius – long since fed up with languishing in her rival’s shadow – incites the people against her. Coriolanus dies in a blaze of automatic rifle fire, Aufidius administering the final coup de grâce point blank with a pistol to the brow.

All this ultra-violence left even our Vancouver audience too stunned to offer up our customary standing ovation (although, be it noted, we did recover and rise to the occasion after a moment). The production was seamlessly – almost breathlessly – fast-paced and the protagonists showed enormous energy and versatility, equally adept at pitched combat and (when given half a chance) sensitive locution.

Those chances came all too rarely, though, leaving us with a general impression of a world out of whack, but scant inkling as to just why or how. Part of the problem may be the basic unlikeability of virtually every one of the dramatis personae, as written, which keeps Coriolanus chronically in the bottom quartile of the Shakespearean canon’s hit parade.

But, precisely for its rarity, the play is worth a look-see on the Howard stage. It was sold out even before it opened in late August, so Bard has laid on seven additional performances. It runs through September 21st.