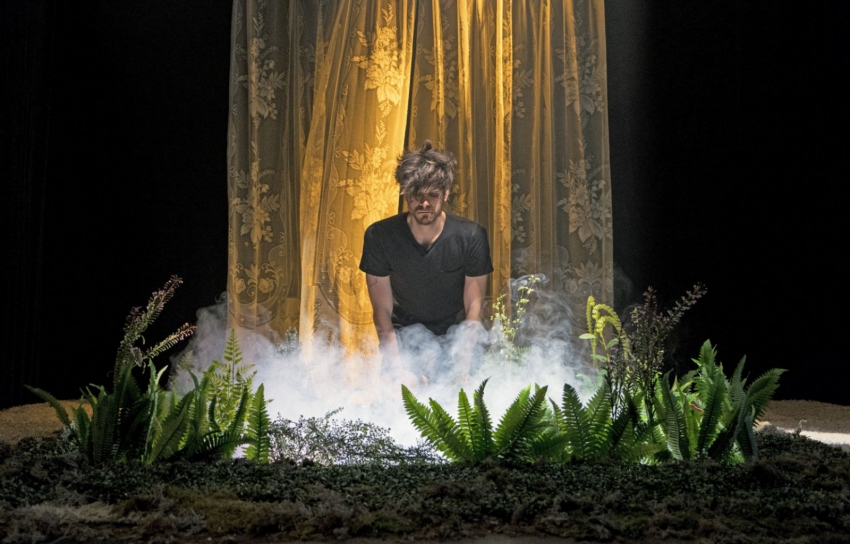 La Seizième’s latest offering to stage-struck Vancouverites (Francophone or otherwise) hardly felt like a night at the théâtre. More like a homey, DIY space launch.

The audience files into Granville Island’s Performance Works, but we never get beyond the lobby bar (liberally stocked with Okanagan wine). Instead of ushering us into the actual performance space, La 16e minions shunt us off into folding chairs under an ad hoc tent canopy within audible range of Spruce Harbour’s lapping waves.

A quartet of earnest techies in Ninja black stand silhouetted against a broad projection screen. They murmur into headphones and pore over a long dais full of keyboards, sound mix panels and computer monitors. We spectators are fitted out with headphones, too, at least those of us whose French is so sous-pair as to require simultaneous translation.

We headphone wearers are the first write-offs in the casting call as Gilles Poulin-Denis, artistic director of Vancouver’s 2PAR4 Production Company winnows the audience to select a star for tonight’s edition of Ce qu’on attend de moi (“What is Expected of Me”). Further filters eliminate theatre professionals, journalists, psychiatric patients or anyone else who feels “less than happy in life.”

Which leaves just five francophones lined up before us for the final elimination, the audience-selection round. Each candidate is polled for a spontaneous free-associative response to the prompt “Freedom.” The answers range from “travel” to “égalité” to “La France.” But the audience applause-o-meter settles upon Yseult, a bespectacled 70-year-old matron, whose winning blurt was simply “siesta.”

She won’t copping a lot of ZZZ’s now, though. She’s promptly bundled out of the tent through a side door into the actual Performance Works stage space. Over the next 90 minutes, we only get to hear her through the amplified sound feeds of sonorisateur Charles Laurier; we only view her onscreen either through an overhead camera or through the lenses of a pair of videographers, as directed and intercut by photo réalisateur Jérémie Battaglia.

Laurier and Battaglia quietly busy themselves with their monitors and dials, like Mission Control technicians. Like an earthbound ground crew, they share the same space with us, right there in the darkened tent. They fill out the dais alongside Poulin-Denis and the show’s co-creator, Philippe Cyr of Montréal’s l’homme alumette production company.

But this is a Manned Mission (in the metonymic, gender-neutral sense); our eyes remain fixed on the enlarged image of our intrepid Astronette, Yseult, on the projection screen. She might as well be on another planet, moving without gravity or friction from one to another carefully composed, tastefully lit mini-scene. Now she’s in a forest, then in a basement, next in a steaming, ferny bog or a field of waving grasses or idly pumping a backyard swing.

She’s offered free rein to select her own sequence of locales among a set of labeled options on a segmented sound stage. She’s also invited to try on an alter-ego, improvising her new persona on-the-fly from scene to scene. She opts for a male identity, dubbed (somewhat predictably) Tristan, but not too unlike her original self in age or background.

So far so sweet, with so much make-it-up-as-you-go-along latitude. Remember, from the casting call query onward this was all supposed to be about “Freedom.” The show flows smoothly, almost lyrically, with just a few hiccups (Yseult complains about the sweltering heat in there and the malfunctioning earphones through which her “ground controllers” issue obscure instructions inaudible to us).

Yet it all seems somehow just a bit stagey and contrived. After all, out there in the memeosphere, there’s still a non-negligible and growing public suspicion that even the all-too-photogenic Apollo Moon Landings might have been faked.

And, as the program notes spell out, Yseult is not actually alone on the soundstage. Unseen in there with her are the two circling camerapersons, Patricia Derome and Gaëtan Nerincx, plus “technical director,” Wanderson Santos Dameceno, who steers her scene to scene and silently hands her props.

The props get more and more alarming, too. She’s given a whole raw chicken to dissect with a box-cutter, only to discover an egg inside which, when shattered with a hammer, sprays her with red powder. And then, amidst an ominous voice-over about a chrysalis metamorphosing into a butterfly, Yseult is handed some blue face-paint, a ping organdy ruff and a gaudy kimono. Flap your wings, she’s (inaudibly) directed, but the effect is less lepidopteran than clownish.

Even more humiliatingly, she’s directed to crawl on all fours and backwards into a regulation air-freight standard pet-shipping kennel, only to be offered a (purportedly edible) doggie treat in recompense. And then she’s invited – no, ordered – to drown a live hamster that’s trapped in a glass aquarium. “Go ahead. People paid for this; you have to do it.” It’s a nightly repetition of the famed Milgram experiment and, to everyone’s great relief, Yseult refuses to obey.

Outside in the tent, unheard by the lonely Astronette, the audience cheers her assertion of independent will. But how independent, really? Her very refusal is so predictable it’s virtually scripted. “In hundreds of performances, we’ve never yet lost a hamster,” says the show’s scenographer, Odile Gamache, an ironic demonstration of the doctrines of the show’s philosophic godfather, neurologist/ethicist Henri Laborit.

Philippe Cyr elaborates. The show’s co-creators, being French, needed a guiding philosophy, which they found in Laborit’s skepticism about even the possibility of free will. As expounded in his Éloge de la fuite (“In praise of Escapism,” a polemic untranslated so far into English), we’re screwed – inexorably cornered by our preordained mortality, just by virtue of our innate human condition. So we have only three options: submission, fight or flight. All are equally futile, but, of the three, flight might boast a tad more dignity or at least a modicum of artistic finesse.

At the end of her mission, Yseult thanks her controllers and her audience and then lets herself out of the back door of Performance Works. We last see her fleeing, back turned to us, down the rain-slicked Spruce Harbour boardwalk.