"Never the Last," a virtuosic séance 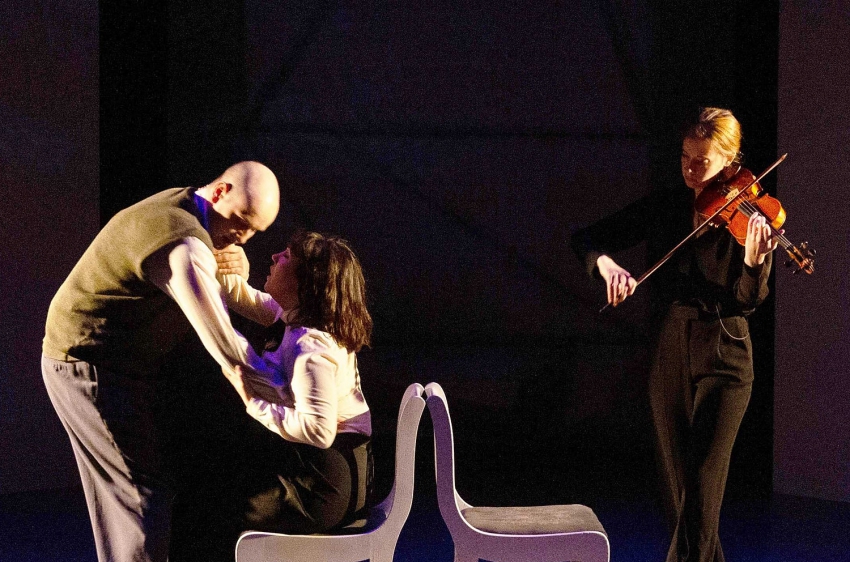 Pure romance, isn’t it? Too-beautiful-to-be-true. In a word, operatic.

Well, as La Bohème, this narrative has been earning plaudits, including locally, for over a century on proscenium opera stages with a star-studded casts of dozens, lavish sets and costumes and full orchestras.

But now, in the world premiere of its original script Never the Last, Vancouver’s own decade-old Delinquent Theatre mounts the same general story-line with only one solo violinist, Molly MacKinnon, and a pair of up-and-coming actor/singer/dancers, Christine Quintana and Anton Lipovetsky.

Their show was just as affecting as the Puccini version, just as romantic. But, with the Delinquent trio performing just inches from the knees of the front-row audience in the Orpheum’s black box Annex, the performance has a gritty immediacy that a full-dress opera extravaganza could never attain.

Rather, Never the Last is too-true-to-be-beautiful, at least in any glitzy, glamourous sense. Much of its truth and its quietly authoritative beauty owes to its derivation from the real world lives and work of actual, historical protagonists: composer and concert virtuoso Sophie Carmen Eckhardt-Gramatté and her tubercular, PTSD-wracked husband, expressionist painter Walter Gramatté. They’re played by Quintana and Lipotevsky, respectively.

Sophie is the main focus. She’s evoked by MacKinnon’s onstage rendition of selections from her repertoire of 10 Caprices (1924-1936) for solo violin. Never the Last is no chamber opera. It comes off as more of a multimedia Ekhardt-Grammaté recital, embellished by nuanced acting, Kayla Dunbar’s rather frisky choreography and Joel Grinke’s fractured projections of Walter Grametté paintings onto the white, cubistic backdrop of Jennifer Stewart’s set.

MacKinnon first dreamt up the project three years ago as a UBC music student smitten with the Caprices. Delving into the composer’s biography, she felt the violin solos could “summon [their] creator to be present in some ephemeral way.” With this conceit as a starting point, she and co-creator Quintana worked up a haunting script that channels the spirits of Sophie and Walter Back from Beyond.

Jillian White’s chiaroscuro lighting, by turns glaring or hazy or lurid, serves to deepen the séance atmosphere. So does Nancy Tam’s sound design, injecting eerie overtones as needed. Stewart’s minimalist props – just four chairs, a music stand and an easel, which the actors keep shifting about the stage – enhance the sense of limbo and flux.

Coordinating the intricate clockwork of all these elements, director Laura McLean (co-founder, with Quintana, of Delinquent Theatre) delivers a highly stylized, intellectually challenging production that nevertheless sweeps us along on its emotional momentum.

Using the 10-piece cycle of Caprices as chapter headings, the play’s two protagonists relive their decade-long marriage from stormy courtship to Walter’s 1929 death, at age 32. Conditioned as we are by the likes of Paganini or Rimsky-Korsakov, it’s all-too-easy to think of the Caprice form as innately sprightly and blithe, but Ekhardt-Grammaté knew better. Some of her Caprices, to be sure, bear titles like “Joke,” or “The Little Bird,” with moods to match.

But look out, also, for such dark variants as “The Invalid and the Clock,” or “The Train Departs” or “Lament.” At the very outset of Never the Last, Quintana, as Sophie’s ghostly avatar, makes MacKinnon promise to play all 10 of the Caprices (“but not too fast!”). True to her word, the violinist plays her solos virtually non-stop for the entire 75 minutes of the intermission-free show. But not, necessarily in sequence, nor start-to-finish for any give Caprice.

Rather she ingeniously curates the scores to fit the action, all the while joining into the meticulous choreography. She even joins her two co-stars now and then to sing wordlessly in harmony with her own violin line – a flagrant vaunting of shockingly polymathic talent by all three of them.

Etymologically, the word “caprice” seems to have something to do with the Latin word for goat. And if you’ve ever herded goats (as have I in the course of my drama critic training) you know them to be willful, mutable – but charming – creatures. Much like Sophie, when we first meet her, sulking on the sidelines of an artsy Berlin party in 1919.

Her nerdy, defensive, very funny initial dialogue with Walter soon unfolds into a tempestuous romance.  Defiantly unsentimental, she finds herself ambushed by love. He pursues her with all the urgency of a doom-shadowed, consumptive World War I veteran. Quintana and Lipovetsky brilliantly project these characters in all their complexity, and the chemistry between them is palpable.

In the intimacy of the Orpheum Annex, you could wind up feeling slightly singed by the intensity of these performances. Well worth a little scorching, though. Never the Last runs through April 20th.

#digitalstrike: how the climate action movement is responding to COVID-19

The Coronavirus lockdown is a threat for many animals, not a blessing