"Noises Off," laugh cues on 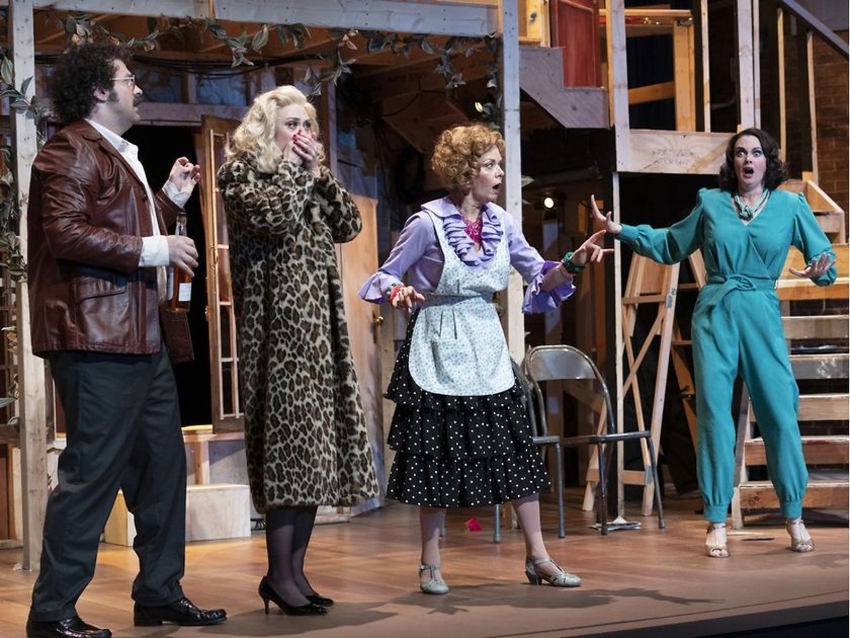 Back in the Late Pleistocene Epoch, when I was in sixth grade, we used to play with an origami-like construction we called a Fortune Teller. Sliding your fingers into its pleats, you’d twist and flex the little paper polygon to hide its exposed surfaces and reveal underlying layers. I don’t remember much about what runic inscriptions we’d buried in there, but – as pubescent pre-teens – it must’ve been all about who secretly longed to smooch with whom.

Nowadays, our home-made toy has been dignified with the classy name of a “flexagon,”endowed with much mathematical interest. In bringing British farceur Michael Frayn’s 1982 West End hit Noises Off to the Stanley Alliance stage, Arts Club director Scott Bellis offers Vancouverites a stylish new flexagonal take on an old repertory staple.

Designer Ted Roberts has worked out a clever revolving-stage geometry that tweaks the action inside-out and outside-in again. It’s all set to the frenetic cadence of soundman Anton Lipovetsky’s crashes, bangs and reverbs and the flickering chiaroscuro of Alan Brodie’s multi-hued lighting effects. Bellis, in his program notes, extols the 35-year-old script as “mathematically precise and colourfully outlandish.”

But, at its heart, Noises Off remains a jejune little Fortune Teller of a play, all about overt and covert smoochery – a set of interlocking love- (or lust-) triangles that add up to a nine-sided rondo of misalliances. A flexanonagon?

All nine characters are show folks, cobbling together a provincial roadshow production of an English bedroom farce. The actors among them, in their over-the-top theatricality, self-dramatize their neuroses even as they struggle to conn their lines and Stanislavsky themselves into their stage personae.

Trouble is, their slender stock roles offer not much traction for method acting. There’s a bimbonic sexpot (Tess Dagenstein) who turns into a spacey airhead the moment she’s offstage; a dashing con-man (Charlie Gallant) who can never quite finish an unscripted thought; a dipsomaniac, superannuated cat-burglar (Andy Maton); a Cockney chambermaid (Colleen Winton) with a sideline investment (financial and emotional) in the production; and a married pair of well-heeled tax exiles (hypochondriac Jovanni Sy and gossipy Emma Slipp)  on a clandestine foray back to their Olde English manor.

Propping them up are a pair of backstage wranglers: mousy script-girl/prompter Ming Hudson and long-suffering stage manager Nora McLellan. We meet them all at the final tech run-through, and the show has yet to gel, much to the distress of their bombastic director (Andrew McNee).

But everybody, cast and crew, maintain at least a veneer of cordiality. After all, the show must go on, somehow or other. As they rehearse, we get a sense of their scripted play-within-a-play: two couples and one burglar, all lurking on risqué, undercover visits to the same manor house, but unaware of each other’s presence. Maintaining that unawareness entails a lot of popping in and out of assorted doorways in Roberts’ multi-level, many-portaled stage set.

The entries and exits have to be perfectly timed for titillating near-misses without the characters ever quite bumping into each other. For further titillation, there’s a lot of dishabille, ranging from Dagenstein’s silky bustier to Sy’s baggy boxers. Roadshow hams that they are, the actors banter stagily in non-stop Brit-accented phonemes (courtesy of dialect coach Alison Matthews), even when they’re not playing in character.

But then, for Act II, the whole intricate flexagon gets turned inside-out – the real “mathematical” genius of Frayn’s script. With a spin of the revolving stage, we now find ourselves looking at the jury-rigged backside of the manor-house set, with its many entry/exit portals, props and quick-change costumes, ramps and catwalks, sound- and lights-boards. It’s opening night, so the production’s going “real time.” Show folks waiting in the wings have to squelch any offstage sounds – “noises off,” in theatre jargon – so as not to interfere with the front-house dialogue.

But it turns out the cast and crew have a whole lot to say to each other as a whole slew of internecine peccadilloes and intrigues come to light. Except now, these orotund thespians suddenly have to express themselves in silence, through pantomime, sabotage or hand-to-hand combat. Since we’ve already learned something of their quirks, rapports and assigned lines in the previous act, we can now relish the muffled backstage chaos and how it fits in with the overheard onstage cues.

Act III replays the same performance, but this time spun back around to be seen from the front-stage perspective of the opening night performance. Pratfalls, confusions and come-uppances abound in direct consequence of the silent mummery of the previous act. Gallant, the con man, gets to execute the most elegant downstairs tumble – three whole flights! – that I’ve ever seen onstage.

It all fits together with impressive precision – an ingenious flexagon. But, for all its studied hilarity, the action seems a bit chill. Maybe it’s the stiff-upper-lip Pommy accents, so clipped as to verge on unintelligibility at times. Or maybe the overly ingenious, “mathematical” structure.

The performers – all top-flight local talents – were uniformly excellent, making the most of their unidimensional characterizations. But their roles could each be summed up in a few adjectives (c.f. supra) that clung to them like Homeric epithets.

Still, well worth taking in this Arts Club production for a longish run (2+ hours) of sustained laughs. Not guffaws, exactly; more like seemly West End titters.