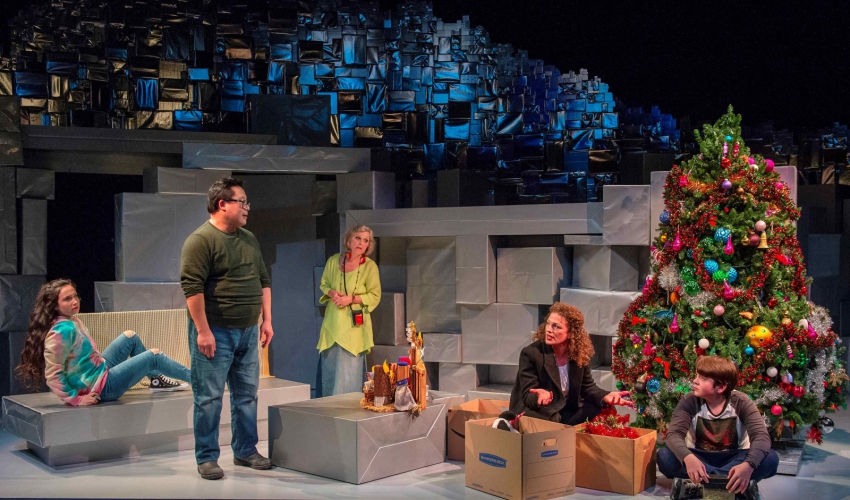 Barely Black Friday and already Arts Club is decking the halls of its Goldcorp Stage with boughs and baubles. Holiday songs ooze out of all the lobby speakers and even (extra loud, for some reason) in the loo.

Such as Salena (Ghazal Azarbad), the smart, slangy, mildly Ebonic check-in agent who greets freshly deceased Esther (Nicola Lipman) upon arrival at Heaven’s Gate. Emerging from her terminal Alzheimer’s, Esther catches only a glimpse of the afterlife (palm trees, beachfront balconies; an enticing Club Ded) before she’s sent back home to clean up some “Unfinished Business.”

There’s an App for that, Salena helpfully points out. Bucking for a promotion from the Hospitality Desk to the Tech Sector, the ambitious angel equips Esther with a magic cellphone that confers selective corporeality.

At first the bewildered grandma wafts in ectoplasmic invisibility among her earthly survivors, catching up on the wreckage that has overtaken her family. While Esther lay adrift in a fog of dementia, her hard-charging, career-driven daughter, Miriam (Jennifer Lines), and easygoing stay-at-home son-in-law, Steven (Jovanni Sy), are in the throes of divorce. That leaves their children, pouty adolescent Chloe (Matreya Scarrwemer) and pre-teen Simon (Glen Gordon), to navigate their first Holiday Season as shuttlecock “custody kids,” bouncing from Hanukkah at Mom’s place to Christmas at Dad’s.

Snooping invisibly, Esther comes to realize how wrenching is this process for the grandkids – and, by analogy, how deep the wounds her own divorce, decades ago, have left upon her emotionally brittle daughter. Via the magic cellphone, she manifests herself to Chloe and Simon. They’re freaked, at first, but – as digital natives of this Virtual Reality-savvy generation – they promptly bounce back and guide Grandma through a Nativity-themed online role-playing game.

The culminating game-world scene, though, lands them back in the palliative care ward of Esther’s nursing home for a recap of her last visit with her daughter and grand-daughter.  None of them recognized it at a death-bed scene at the time.

Miriam remains encysted in her defensive resentments. The grand-child broaches he sickroom with the squeamishness of youth. And Esther’s so befuddled that she mistakes her grand-daughter for her daughter, while dismissing the actual Miriam from the room as an intrusive nurse.

Chloe rises to the occasion, plays along and – in the name of Miriam – accepts the old lady’s acknowledgement of those long-ago harms. But it’s only now, through the play’s eponymous “Miracle” of heavenly VR, that the newly compos mentis Esther and Chloe finally grasp the real import of that admission: the resolution of so much Unfinished Business.

By now, gentle reader, veteran as you must be of many a Holiday Special, you can doubtless already glimpse the heartwarming denouements: Grandma’s ghostly apparition to Miriam, their tearful reconciliation, the family’s finessing of the joint custody blues,  Salena’s well-earned promotion, Esther’s installation in a heavenly  condo (as the rest of us onlookers remain waiting in the afterlife check-in queue).

But what could have been a sodden plum pudding of sentimentality, Youssef leavens into a tangy soufflé of topicality with witty asides on everything from interfaith hybridity to hyper-consumerism to co-parenting to affirmative action.

Some of the gags are deftly turned epigrams; some are flat-out goofy à la Panto. (Youssef in fact penned last year’s Cultch Panto and is slated to write a new one for the upcoming season). But all the jokes are delivered with impeccable timing and characterological acuity by the six-member cast.

All the more impressive as Director Chelsea Haberlin marshals her performers through an intricate clockwork of ingenious stagecraft. Set designer Lauchlin Johnston has created a tottering mountain of gift boxes. These the actors reconfigure as they go along to create catwalks and stairways and platforms and articles of furniture and VR bubbles and cosmic wormholes as needed.

The boxes are all wrapped in silvery paper, the better to reflect Lighting Designer Conor Moore’s illuminations, by turns ghostly or gaudy. And Costume Designer Jessica Oostergo togs out the whole ensemble in an array of quick-change outfits that range from role-playing frippery to suburban mundanity. To top it all, under the guidance of Sound Designer Anton Lipotevsky, the actors quite credibly sing, strum and drum their own musical soundtrack lifted from the repertoire of offbeat Christian rocker Sufjan Stevens.

But Haberlin never allows the fancy staging to upstage the nuanced performances of her talented cast. Between them, Lines and Azarbad headlined this past Bard on the Beach season, and they bring to Youssef the same flair that they showed for Shakespeare. As the Christian (and, coincidentally, Chinese-Filipino) Dad of the play’s parental pair, Sy somehow manages to epitomize the quintessentially Yiddish virtue of menschlichkeit.

Scarrwener’s actually no child. She made her Arts Club debut in 2013 and has run up a long list of TV and film credits. But she perfectly captures the volatile mix of jaded, eye-rolling cynicism, touchy insecurity and unicorn-besotted vulnerability of a modern 13-year-old.

Glen Gordon, on the other hand, still qualifies as a bona fide child but has already amassed an impressive stage, film and TV resume of his own. He performs with poise, yet still can bring off the sweet sidekick sappiness of a loyal kid-brother. What a star he’ll be if he can retain that allure once his voice changes.

But it’s Lipman, as Esther, who practically steals the show. Faded to a ghostly pallor, she’s somehow still the most vivid presence onstage, with her shrugging asides, her insights and muddles, surprising herself with unsuspected reservoirs of heart. Exactly the condo neighbour you might choose when you make it down that cosmic rope line – if you can get past the check-in counter.