"Peer and purr, and pass the Passion" 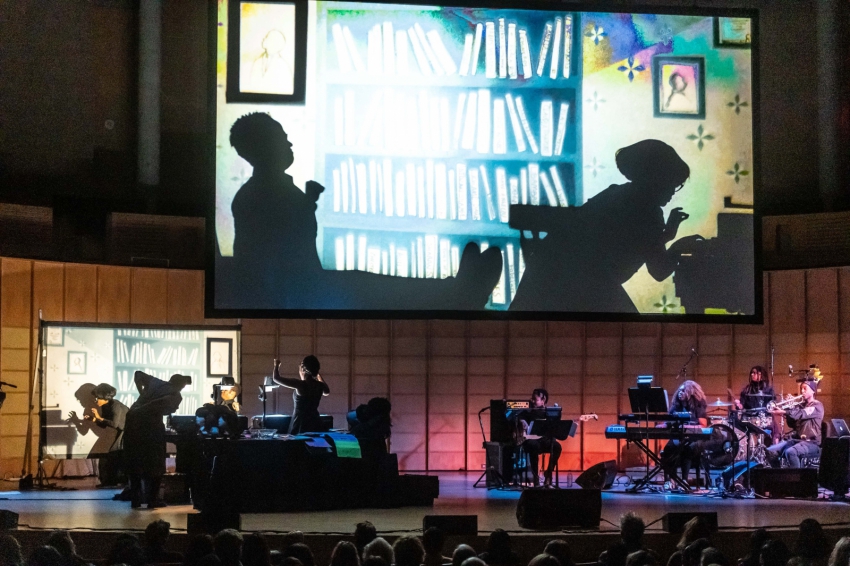 A Javanese shadow puppet play, or wayang, takes all night to recount a few episodes from sacred epics. The solo puppeteer, or dalang, squats in a trance state between an oil lamp and a cloth screen, manipulating the ornate stick figures and channelling all the voices while conducting the metallophone orchestra with one foot. Single-handedly (or single-footedly?) incarnating so many gods and heroes, no wonder the dalang is revered as a sort of shaman.

To sustain a similar effect for barely an hour, Chicago’s Manual Cinema collective uses overhead projectors, multiple screens, live feed cameras, five shadow puppeteers and a jazz quintet. They’re hardly betranced, either; rather scampering across the stage with hairpin-coordinated precision just to keep from bumping into each other.

But, for the Chan Centre’s “Beyond Words” crowd, the scurry of performers and technicians hardly diluted the magic of No Blue Memories as a kind of North American wayang.  To an audience largely made up of poetry buffs and Black History boffins, the subject of the show – poet Gwendolyn Brooks (1917-2000) – commands heroic, almost godly, reverence.

A published prize-winner since her early teens, Brooks rose to Laureate status in her home state of Illinois and in the U.S. Library of Congress. Yet she shied away from the mid-20th century lure of Black respectability politics, keenly eulogizing instead the humbler ghetto lives around her and even confessing to a lurking urge to be a “bad woman” herself.

Not that she couldn’t knock out a formally perfect sonnet (English or Italian) with the best of them. But later in life – after the riotous 1960’s, after her personal pilgrimage to Mother Africa – she adopted to a freer, more umbrageous voice in screeds like Third Sermon on the Warpland (from which I’ve lifted the alliterative headline above as a pretty fair summary of Brooks’ writerly M.O.). And, as a teacher and mentor to “my people’s” aspiring young writers and artists, she Mattered to myriad Black Lives.

Conspicuous among the artistic lives Brooks touched, whether directly or indirectly, would be the vastly talented Woods sisters: bassist and vocalist Ayanna Woods composed the show’s score jointly with her poetess sister, Jamila. And another sister, Kamiria, joined Ayanna onstage to provide vocals as well as sound effects (a lot of whistling Chicago winds).

Ably supporting the vocals are drummer Shalynn Brown and keyboardist Ami Burton, along with the eloquent trumpet of Ryan Nyther. They bring out the musicality of Brooks’ lines in a way that would be hard to convey with just text on a page. Yet the musical settings could all too easily come off as mere sonic mood pieces if they were not each preceded by the lucid, nuanced verbal recitations of the puppeteers to bring out the subtleties of Brooks’ sly wordplay.

And the same puppeteers simultaneously enact the scores of characters – everyone from schoolgirls to convicts to society matrons to ward-heeling pols, not to mention Brooks’ own parents, husband and children – that place the poetry in their uplifting biographical context.

Undisputed star of the show is N. Laquis Harkins in the role of Brooks herself, but all five puppeteers display dazzling energy, versatility and sheer stamina. Sometimes they’re manipulating witty little cut-out silhouettes on the overhead projectors.

Sometimes, dressed in a giddy series of quick-change costumes (by designer Mieka van der Ploeg), they’re casting their own images directly onto the projection plane, careful to restrict their motions to a lateral profile for an identifiable outline that can interact with the other onscreen shadows.

Director Sarah Fornace keeps No Blue Memories moving at a brisk clip – she has to, with eight decades of tumultuous history and biographical drama to cover, as per co-authors Eve Ewing and Nate Marshall’s rather breathless script.

And all this while leaving enough “breathing room” for us to fully savour the extensive recitals and musical settings of the poems. Just what it all adds up to, the show wisely leaves us to catch-as-catch can on our own. As Brooks would be the first to enjoin us, “Live not for the-end-of-the-song. Live in the along.”