But if Anywhere But Here presents a spectacular Big Top extravaganza, playwright Hannah Moscovitch’s Old Stock manages to pack many of the same exile themes into a compact show-in-a-box. Literally.

Entering UBC’s Frederic Wood Theatre, we’re greeted with the blank face of a proscenium-filling freight container. No signs of life until a the show’s star and co-creator, Ben Caplan, pops out of the container’s lid to greet us – top-hatted, full-bearded and googly eyed, like a manic Jack-in-the-Box.

And he keeps right on jiggling, jouncing, crooning, swooning, prating or orating for pretty much the whole uninterrupted 85 minute show, even after the container’s front panels swing open to reveal an array of props and puppets plus a klezmer quartet.

Two of the combo players, violinist Shaina Silver-Baird and clarinetist Eric Da Costa, double as the Moscovich ancestors alluded to in the show’s sub-title, A Refugee Love Story. They bring out their characters poignantly, shuttling between musicianship and acting roles with impressive virtuosity.

But it’s still and always Caplan who holds uncontested sway. He’s equally at home delivering witty patter songs, C&W thud-puckery, cantorial wails, a bitter-sweet lullaby, accusatory punk-inflected howls or a chilling pogrom narrative. All pickled with way more than a grain of salt. Kosher salt, that is, a rich brine of Yiddishkeit.

Impressive as it is as a testimonial to his performative versatility, Caplan’s eclectic repertoire could all too easily have dissolved into a random grab bag of original compositions. Credit director Christian Barry for stringing it all together on the narrative thread of the Moscovitch grandparents and their Romania-to-Montreal hegira. In the process, Barry seems to have gotten his hands into multiple aspects of production; he shares co-credits for scripting,  sets and lighting. 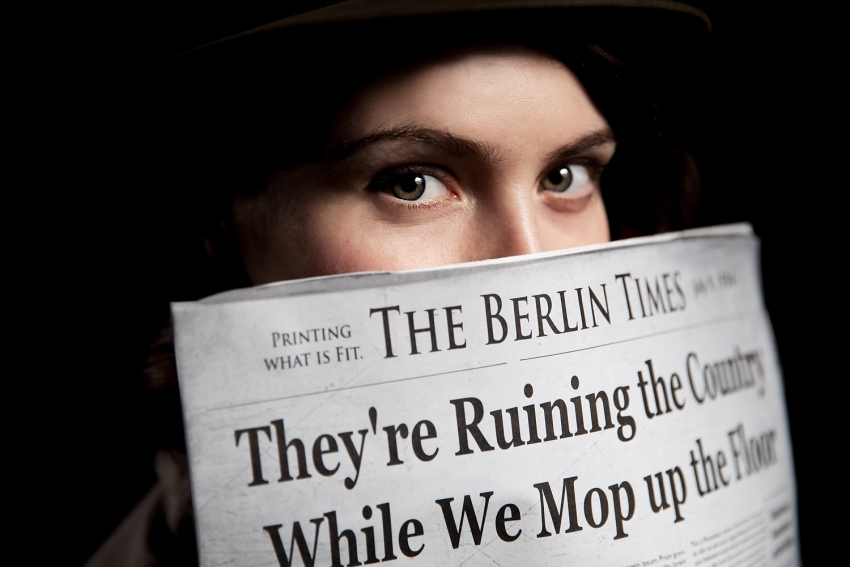 Tomorrow, the premise goes, the city’s last cabaret troupe will disband and its five surviving performers (one’s already been “disappeared”) will wend their several ways into exile, Nazi collaboration, resistance or the Hitler’s death camps. But tonight, we’re treated to one final round of their signature shtick.

So we get vamping tangos and torch songs from the troupe’s diva and proprietress (Meaghan Chenosky), cutesy/kinky soft shoe numbers from the gender-bending duo of Alen Dominguez and Julia Munčs, heart-throb ballads from the dapper leading man (Daniel Doerksen) and soulful ruminations from the Jewish “second banana,” Brent Hirose.

But as the evening goes on, the selections get edgier and angstier – a swaggering “Song of the Big Shot,” a drumbeat tattoo, a trampling “Dressage,” a satiric farrago of anti-Semitism – before settling back into a a note of rueful foreboding.

Twenty songs in all, from the actual repertoire of German cabarets in the 1920’s and 30’s, carefully culled, researched and arranged by music director Roger Parton (who also performed on keyboard and led the live quartet of woodwind, string and percussion accompanists).

Some of the music and lyric credits list names that are still well-known, viz. Bertholt Brecht and Kurt Weil. But most of the songs come from now (unjustly) forgotten composers like Hanns Eisler, Mischa Solansky and Frederick Hollander.

All 20 songs share in the characteristic saltiness (not to say cynicism) of the late-Weimar zeitgeist; all the more piquant considering the refugee fates – or worse – awaiting their original creators and performers.

Stage director Alan Corbishley, who first conceived the project, recounts in a post-show talk how he helped sift through over a hundred “lost” musical scores to exhume this selection of “important, yet disturbingly timely songs.”

Dramaturg Joanna Garfinkel, in her program note, sets out to counter some all-too-common notions of the Holocaust as “innocuous and unchallenging suffering.” Rather she hopes to celebrate “resistance…some [of it] vulgar, oblique and funny…[that] wobbles its way…to a salacious solidarity.”

City Opera artistic director Charles Barber is even more explicit: “Our objective in Berlin is to examine the rise of fascism through the manufacture of consent…If this sounds familiar, it should. If it sounds contemporary, it is.”