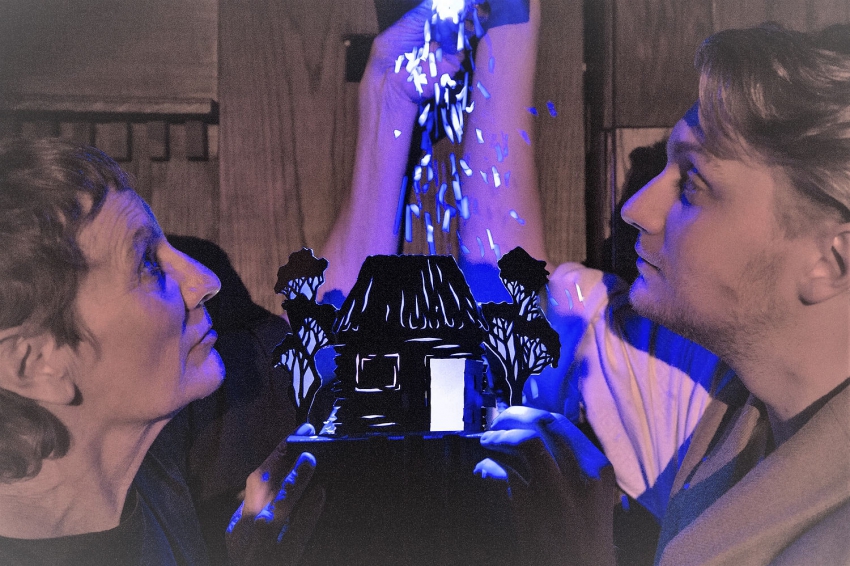 A century and a quarter ago, Oscar Wilde was convicted for “gross indecency” and widely reviled as a corrupter of youth. It wasn’t until just last year that the moribund United Kingdom, in its self-inflicted Brexit death throes, got around to posthumously pardoning him (and some 50,000 other gay men) for long-since decriminalised sex offenses.

But even beyond the grave (he died in 1900) Wilde is still corrupting youth. Not with ‘sodomy,’ but with qualms about the fairness, wholesomeness and inevitability of a capitalist consumer economy. In this he’s abetted by Australia’s Slingsby Theatre and its local enablers, Carousel Theatre for Young People.

Together, the two companies are inoculating infectious doubts  into job lots of Vancouver pre-teens (plus assorted parents/guardians), batch processed them 50 at a time through Granville Island’s Performance Works for a multi-media, audience participatory dramatized reading of Wilde’s seductively socialist fable The Young King.

The text is pretty much verbatim, unadulterated Wilde, by turns lyrical and epigrammatic. Director Andy Packer and script adapter Nicki Bloom make almost no attempt to dumb it down for a kiddie audience. But they do encase it in a meta-theatre conceit that turns all attendees into devoted subjects of a fairy tale kingdom attending the coronation of a dynastic scion.

The occasion takes on extra piquancy as the anointed heir is the winsome love-child of a banished princess who’d secretly wed “beneath her station” and then died of grief when her baby was stolen and her lover murdered. The boy is raised by a forest goatherd until his grandfather, the dying Old King, hales him back to the palace, where he’s cossetted with beguiling luxuries pending his ascent to the throne.

So we, as coronation guests, are divided into tribes according to where in the kingdom we come from: the workshops of the West, the fishing ports of the North, the mines of the South or the forests of the East. Uniformed flunkies usher each group into the theatre through a maze of black curtains and enigmatic dioramas. We’re taught the royal salaam, invited to craft our own (cardboard) helmets. Each little platoon is handed a coronation gift to present to the young princeling: cloth-of-gold from the West, pearls from the North, rubies from the South.

My juvenile focus group (ages 10 and 12) were assigned as foresters of the East. We felt a bit declassé when our “gift” turned out to be just a lowly wreath of briars. But we soon got over our disappointment when ushered into the gracious presence of the Young King (James Smith) himself.

He keeps court in production designer Wendy Todd’s theatre-in-the-round layout, bracketed front and back with vaguely Tudor-looking wood panelling. One wall is inset with what looks like a massive, arched fireplace that serves, in the course of the 45-minute text recitation, as a portal, a backdrop or a proscenium. The walls are riddled with cubbies and crannies from which Smith and his co-star, Jacky Phillips, produce assorted bric-a-brac: finger- and shadow-puppets, ornate projection scrims, scraps of costume, handheld mini-spotlights.

The framing story device wins over the young audience right from the outset, with the kids visibly swept up in all the ceremonial folderol and costume jewelry glitter. The excitement was catching – even this jaundiced critic sensed a faint twinge of some pre-pubescent elation I haven’t felt since my own Bar Mitzvah back in the Late Pleistocene Epoch.

But the thrill began to pall as the Young King, on the eve of his investiture, is beset with nightmare visions of how cruelly the royal purveyors exploit his poor subjects to produce his coronation finery. By dawn, he’s so shocked that he sheds all his regalia and greets his people in his original goatherd garb.

Crowned only with the briar wreath of us Eastern foresters, he goes forth expecting the plaudits of the egalitarian multitudes. Instead, Wilde has him upbraided by a scornful yeoman: “Sir, knowest thou not that out of the luxury of the rich cometh the life of the poor? By your pomp we are nurtured, and your vices give us bread…Thinkest thou that the ravens will feed us?...Therefore go back to thy Palace and put on thy purple and fine linen. What hast thou to do with us, and what we suffer?”

In my focus group, this speech left the 12 year old staring in some perplexity at her designer sneakers. But not for long. Wilde goes on to relate how, as the Young King stood rebuked in his coronation chapel, “Lo! through the painted windows came the sunlight streaming upon him, and the sunbeams wove round him a tissued robe that was fairer than the robe that had been fashioned for his pleasure… And the people fell upon their knees in awe.”

"It's Special FX, a lighting trick!" my 10-year old enthused. Sure enough;  this back-lit scene rates as the crowning achievement of  lighting designer Geoff Cobham's 45-minute multi-hued chiaroscuro. Still, my focus group members1 didn’t exactly fall on their knees. The boy  conceded with a shrug that The Young King was “fairly awesome” as we filed through the fireplace portal to blink our way out into the post-matinee sunlight of Granville Island.