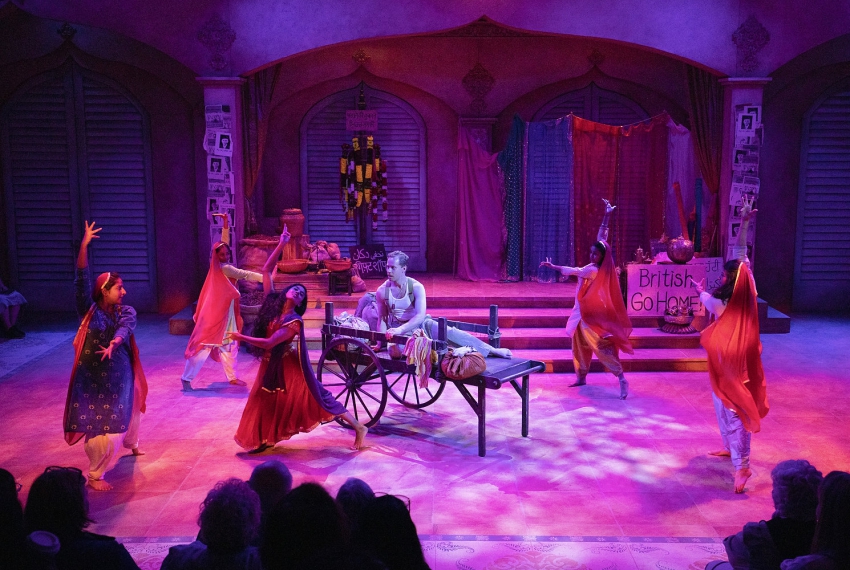 The sun could never set on the British Empire, according to controversial Indian M.P. and epigrammatist Shashi Tharoor, because “even God couldn’t trust an Englishman in the dark.”

But in this year’s Raj-themed  Bard on the Beach production of All’s Well that Ends Well, at least one Indian subject, Helena (Sarena Parmar),  uses the benighted  skulkings of her reluctant English husband, Count Bertram (Edmund Stapleton) to finally pierce through his racism, snobbery and callow misogyny.

And then she apparently ditches him as the sun finally sets, after all, on the ignominious shambles of an Empire in pell-mell retreat.

The overlay’s not so strained a fit as it might seem. Shakespeare’s story line, lifted from the Decameron, shifts between three settings: the bucolic home county of both Bertram and Helen, the royal court in the capitol and the chaos of a frontline battlefield. These venues dovetail neatly with their Twilight-of-the-Raj analogues: a tranquil Ambala Cantonment, the Viceregal Lodge in Delhi and the helter-skelter of India’s Northwest Frontier on the eve of Independence.

Pam Johnson’s flexible framework set – a colonnaded verandah with ogee arches framing jalousie door panels – handily converts into any one of the three locales. Just add a bone china tea service, a few potted roses and sound designer Ruby Singh’s recorded birdsong to evoke the Ambala ambience. A little spit and polish and bunting situate us at the hub of Lutyens’ Delhi Rajpath. Or tack on some political handbills, a caisson wagon and some camp-follower bazaar bric-a-brac to suggest the “functioning anarchy” of the Frontier.

Lighting designers Alan Brodie and Conor Moore bathe the set in coloured spots that variously evoke the glaring “heat and dust” of the Gangetic Plain or the moonlit mystery of battlefield ambush, midnight assignations or Ayurvedic nostrums. But it’s the living tableau of human figures that really establish the contrasting moods.

Vancouver-born choreographer Poonam Sandhu, fresh back from a stint in Bollywood, deploys her talented five-member ensemble cast to fill the thrust stage of Bard’s black box Howard Theatre with what looks like abundant South Asian crowds. Whether dancing a spirited bhangra, gyrating hypnotically to Ruby Singh’s Vilambit Bandish or simply sweeping the forecourt, the dancers lend a sinuous grace to the more Indianized scenes.

The English personae, by way of pointed contrast, come off as duffers or stiffs – roles they enact with apt finesse. Bernard Cuffling plays the Viceroy with a sneezy Churchillian growl; his courtier, Lafew (David Marr, here reconstrued as a military chaplain) projects the huffy orotundity and sardonic snark of a Boris Johnson. Stapleton does what he can with his part. He’s suitably shifty and fidgety as the scurrilous Count Bertram, but the character as written is such a perfect heel that it’s hard to credit his final conversion to connubial devotion.