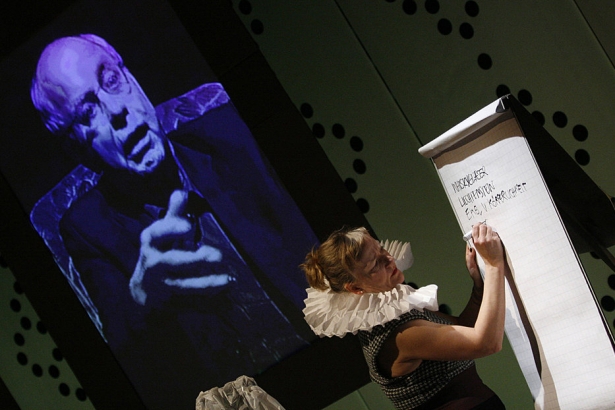 Testament is a contemporary examination of Shakespeare's classic King Lear by Berlin-based theatre group She She Pop, a collective of six women and one man. The surprising twist about "Testament" is that all actors are sharing the stage with their own real-life fathers. Questions about successions, inheritances, money, work, family issues, outstanding bills are explored in the play, as well as the overbearing sense of guilt behind people's relationships with their father.

She She Pop members say they were looking to create a new piece around a challenging, classic play. They found inspiration in King Lear – a drama that deals with the succession of fortune, power and respect in the midst of betrayal, madness, greed and tragedy.

King Lear was immediately appealing, as the cast's own fathers were either approaching retirement or already retired, adding to the autobiographical element that is a key part in She She Pop’s pieces.

“The generation of our fathers  is about to retire right now and we are around 40, so we are quite ready to take over the power, but it turns out that is quite a struggle […] between these two generations," She She Pop performer Lisa Lucassen told the Vancouver Observer in a phone interview.

In "Testament", three actors and their respective fathers appear on stage. Lucassen also appears, but without her father: at 83, he’s the oldest and prefers to avoid long distance travel. Thus, the theme of the absent father is also explored.

“We had long discussions about whether there was a place for that kind of role in the piece or no , and decided it's an important part in the play: the absent father, something [that] lots of people can identify with. Not all people have relationships with their fathers,” Lucassen noted.

On stage, She She Pop makes use of video with three screens framed portrait-style where the images of the fathers appear, while they sit on the side of the stage on reclining chairs with a camera in front of each.

Lines from "King Lear" are also incorporated in the script, but it's minimal, and it's also projected. After these lines are read aloud by one of the characters, various discussions between parents and children ensue around them.

Working on stage with their fathers, who have virtually no experience in theatre, was surprisingly less challenging than Lucassen and her colleagues anticipated.

“All of them have done jobs when they were still working and they had to talk to more than five people at a time -- one was a professor, one was an architect -- so all of them had to do presentations and talk to [some] kind of audience," Lucassen explained.

"They were not so scared to talk to two or three hundred people at the same time. They had no case of stage fright or anything [like that].”

However, trying to involve their fathers in the play was “tricky”, Lucassen confessed with a chuckle. For starters, they weren't even interested in the idea at first.

"We told them we were going to do the piece whether or not they were going to be in it. We invited them and had discussions with us, generating material and telling them 'you can decide if you want to be on the play or not,'" she said, adding, "We'd work on it a little and then [say], 'You see how you like it and then you make your [own] decision’.”

Fortunately, all fathers that attended the rehearsals liked it well enough to stay in the play. Today, they are travelling around the world with their  children and their colleagues.

In more ways than one, the issue of respect -- heavily explored in King Lear -- was an also an issue behind the scenes in Testament. Lucassen said that, working with the fathers has turned out in a “fruitful and very nice collaboration", but  it was also very difficult for her colleagues who felt the urge as children to protect their fathers, making sure they were treated with respect during the creative process.

"Testament" has been so far She She Pop's most successful play to date -- it was chosen in 2011 as one of Germany’s top ten productions for the prestigious Berliner Theatertreffen.

Was it because of their parents?

“So it looks like we needed the help of our fathers," Lucassen said jokingly. "Of course, I was wondering about the success -- everybody wants to be responsible for it and they have all reasons to be proud of it now.”

"Testament" has toured Europe, Japan, South Korea, Peru and Colombia -- and for the first time is touring North America -- and has received praise throughout the world. The preoccupation that children experience for their ageing parents is universal, she said.

"It's really difficult to talk about it with our ageing parents."

Lucassen added that many who attended their shows have even come back accompanied by their parents.

"With the audiences it's that depending on your age or the situation you are living...everyone has somebody to identify with, which is really helpful. I think and a lot of people feel the urge to call either their parents or their children after they've seen the piece!"

Testament plays from January 24 to January 26 at 8:00 p.m., matinee January 26 4:00 p.m. at the Fei and Milton Wong Experimental Theatre, Goldcorp Centre for the Arts in downtown Vancouver. For more information: www.pushfestival.ca

Circa, presented by the PuSh Festival, throws down pedal to the metal performance