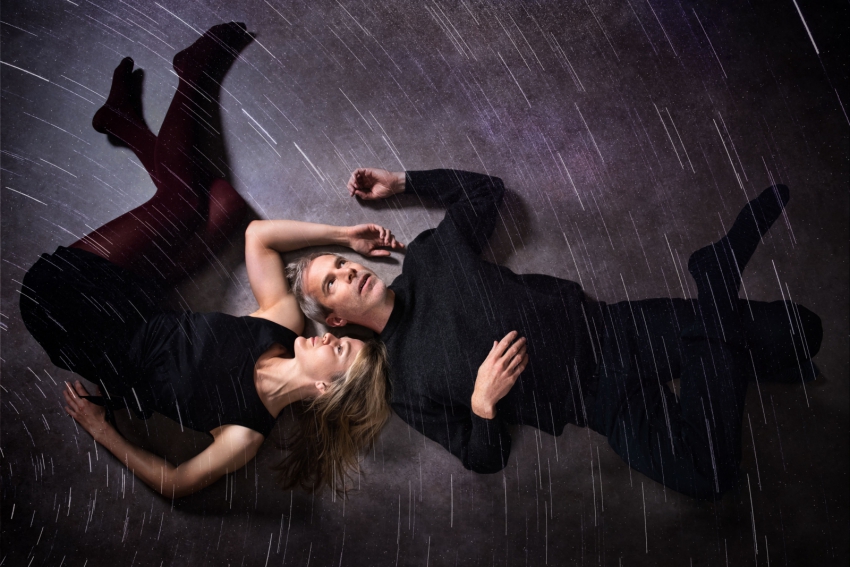 If you can muster the sapiosexual stamina for it, this month’s Vancouver premiere of Volcano/Tarragon Theatre’s Infinity offers 90 uninterrupted minutes of cerebral titillation.

From the moment the house lights dim, director Ross Manson propels us straight to an abstract plane. First thing we see onstage is a solo violinist, peripatetic Andréa Tyniec, slashing her way through a dissonant toccata. The original score is by Indonesian/Macanese/Canadian virtuoso Njo Kong Kie, but we could just as readily construe it as the work of the play’s female lead, modernist composer Carmen (Amy Rutherford), a self-described “sculptor in time.”

Time also preoccupies theoretical physicist Elliot (Jonathon Young), but as far as he’s concerned it’s utterly unreal. Piercing through Time’s "stubbornly persistent illusion" (Einstein’s phrase), he’s fanatically wound up in his PhD project to reconcile the concepts of loop quantum gravity and string theory into an all-encompassing Theory of Everything. On this geeky, time-obsessed affinity, Elliot and Carmen seek each other out at the margins of a boring Harvard party and immediately fall into a tempestuous entanglement that leads a year later to a positive pregnancy test and marriage.

More gusty violin strains and we find ourselves plunged, in media res, into the bitterly funny psycho-sexual self-narrative of a spiky math-whiz undergrad (Emily Jane King) as she nervously packs and reshuffles random stacks of moving crates. No idea just what she has to do with anything else onstage, but who cares? The monologue itself has the sketchy comic edge of a Feiffer cartoon.

The shades soon darken, though, as we come to understand that King’s character, nicknamed Buster, is the daughter of Elliot and Carmen’s bumptious union. She grows up as needy as she is nerdy in such a fraught environment, with Dad lost in the all-absorbing spadework of his theory as Mom wails for support and attention.

In a brilliant pantomime sequence, the three of them execute a hopped up game of musical chairs, hysterically emoting at each other like the legendary Three Nescient Monkeys, so desperate to See, Hear and speak No Evil. It’s an aptly compressed pixilation of the ad hoc scramble of child-rearing, but also an enactment of Elliot’s insubstantial, infinitely plastic notion of Time.

Yet it’s Dad, paradoxically, who best soothes the tempestuous child with his intuitive evocations of voluptuous abstractions, even as he neglects such mundanities as picking her up from school on time or providing a promised present. So when, in mid-seminar, he collapses in mid-lecture with what turns out to be terminal brain cancer, the child can hardly get her eight-year-old mind around his immanent death – a loss that leaves her with the encysted resentment  we meet in her opening monologue.

For Elliot, though, the deathbed scene takes on a different resonance. Suddenly running out of Time, he turns his mental framework inside-out to recognize that it’s Time, after all, that’s real, linking the contingent coincidences of space and matter. In his final weeks, he calls not for his family but rather for his laptop (it’s Buster that hands it to him; Carmen hasn’t the heart) so he can work out the math of this all important new insight.

Star playwright Hanna Moscovitch, with the impeccable pacing we’ve come to expect of her, turns these ideas into pure poetry, but in the underlying concepts we can still discern the rigor and boldness of the play’s “consulting physicist,” Lee Smolin. Heady stuff, and demanding of the audience. But brilliant acting and gales of solo violin, by turns lyrical or vehement, help it all go down.