We all still pay for"The Shipment" 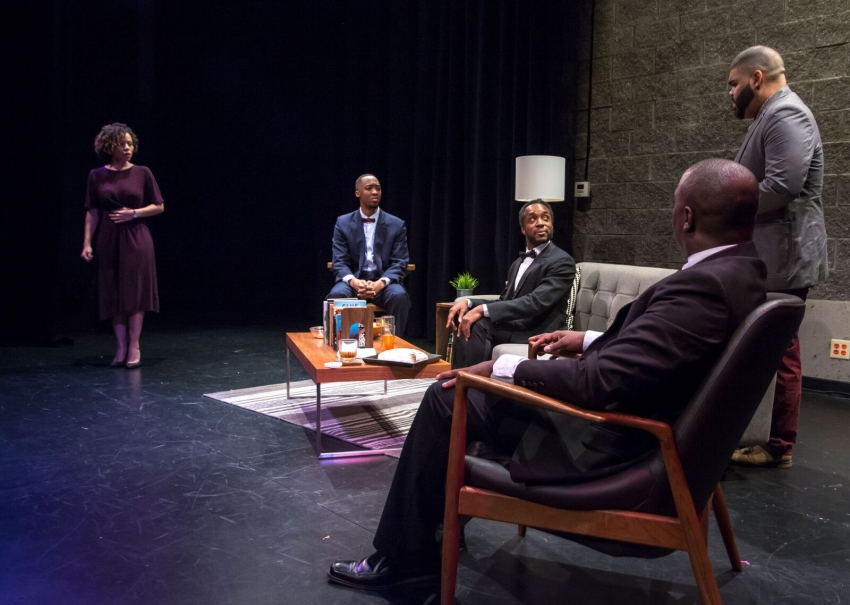 If a Korean American female playwright creates a show for urbane black performers to play criminal, credulous and profane black stereotypes or neurotically uptight whites … is that <gasp> cultural appropriation?

Not if the writer is avant garde sensation Young Jean Lee and the play is Speakeasy Theatre’s rendition of her script The Shipment, according to its co-star and co-director, Omari Newton. The show sold out here two years ago and is now reprised at Presentation House through Saturday, after a successful two week run at the Firehall.

After all, Newton points out, “Lee never claimed ownership of the play.” Rather, in tackling “the most difficult challenge she could imagine…a show about black identity,” she workshopped extensively with the five black members of the original 2009 New York production. She has kept tabs on the Vancouver production and praised its five performers – Newton, Kiomi Pyke, Adrian Neblett, Chris Francisque and Andrew Creightney – for “making it their own.”

Indeed they inject a few Canadianisms – a sprinkling of “ehs” and “aboots” plus the inevitable Trudeau blackface gag this year – but for the most part they stick to the New York script. Even crass racism has a grammar of its own; in fact, a fairly rigid one, according to co-director Kayvon Khoshkam.

“We stick to the format of the classic blackface minstrel variety show: a comic ‘stump speech,’ then a skit with some dancing, a song and then a playlet-within-a-play.” But Lee and the Speakeasy quintet turn the condescending conventions of minstrelsy upside down in ways that deeply discomfit the mostly white audience.

Newton leads with a jive-and-shuck catalogue of the perfidy and inanity of whites. On the uncurtained, prosceniumless Presentation House stage he’s thrust right up in our faces. He jeering and leering at us in broad, profanity-laced Ebonics all the way to the very end of his monologue. Then he suddenly reverts to his calm, cultured natural voice to reveal that he’s married to a white woman (which is true, in fact: playwright Amy Lee Lavoie), whom he loves and respects beyond all else.

But before we have time to digest that factoid, we punch straight into a weirdly stilted wind-up toy enactment of demeaning black stereotypes. The characters dance and die and grin and deadpan with unnerving abruptness, as though at the flick of a switch, reciting their lines in affectless monotones.

It’s all stitched together into a preposterously picaresque plotline about a wannabe rap star (Creightney) who gets suckered into drug dealing by his best bro (Neblett). He winds up in prison, where he is converted to an Afro-centric religious cult. But upon his release he’s “discovered” as a rapper and propelled to the pinnacles of stardom, where a swishy stylist (Francisque) and a gold-digging call girl (Pyke) vie for his favours. Disillusioned, he prays for deliverance, but falls prey to a gibbering preacher (Newton).

This whole life arc is executed in barely half an hour of dazzling physical comedy, with the actors donning and shedding their clichéd roles “like suits of ill-fitting clothes” (as per Lee’s stage direction). Dozens of micro scene changes, all denoted by nothing but the flicker of designer Itai Erdel’s ingenious lighting effects.

And then Erdal slashes a spotlight across the whole row of them as they line up at the front of the stage and stare silently into the audience for an exquisitely uncomfortable couple of minutes, parsing us from face to face while we’re left to ponder quite what it is we’ve been laughing at all this time.

Just as we’re about ready to start squirming in our seats, they quietly break the tension with a sweet – almost hymnal – acapella roundelay rendition of a nihilistically nonsensical Modest Mouse lyric.

It’s party time! But a stiffer soirée would be hard to imagine. Under their veneer of politesse the assembled celebrants goad each other to reveal secret lusts, self-loathing and mutual detestation. An accelerating paroxysm of grim – but wickedly funny – Theatre of the Absurd zaniness with a surprise twist ending. (No spoilers here).

The title, in case you were wondering, alludes to "the commodification of black bodies," according to Newton, and the fact that blacks first arrived on this continent as a shipment of cargo.

If anybody else out there is old enough to remember, I found the final playlet vaguely reminiscent of Jean Genet’s Off-Broadway sensation The Blacks, a Clownerie from half a century ago. But Lee, in our evolved day and age, treads a little more gently, which I guess is progress of a sort.