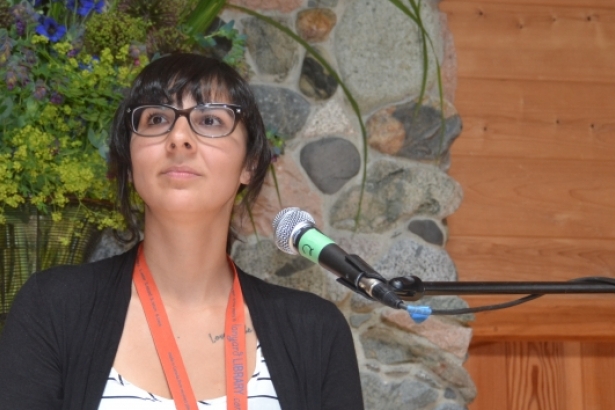 Her people are on "the precipice," their health and culture poisoned by oil sands pollution. They are one of the First Nations closest and most exposed to hazardous effects of tar sands pollution, and the damage has been devastating, Eriel Deranger of the Athabasca Chipewyan First Nation, said.

"It's a genocide. It's happening slowly, but we are dying off. We're still drinking the water, and we're eating the fish, but it's getting poisoned," Deranger, a keynote speaker at the Hollyhock Social Change Institute who works on the front lines of her people's legal battle against unchecked tar sands development, said yesterday.

Living off the land has always been a basic part of Athabasca Chipewyan First Nation culture, she said.  But now maintaining connection to culture can be dangerous, if not lethal.

"I'm still eating the fish, because I don't want the tar sands to change who I am,” she said. “But I still get these moments of panic after, because I don't know what toxins are in the fish and going into my body -- nobody knows."

A fight for the soul of a culture

The need to fight to protect her land has been passed down from her parents, Deranger said.

"Until just 20 years ago --- that's in my lifetime -- the Athabasca Chipewyan were a subsistence society. That means that everything we needed, we got from the land,” Deranger, a 34-year-old mother of two, said.

"My parents met at the American Indian movement. They lived off their land in Saskatchewan until they were forcibly removed, at gunpoint."

Her father in particular, she said, was raised to respect the land and traditions of his people.

"My dad was a bush man. He was forced into the residential schools, but he ran away and he lived with his dad in the woods. My dad has never lived in the white man's world. But he looks at the tar sands development, and all he can see is what it's doing to the earth."

When Eriel was 11, her father took her  to Fort McMurray -- a much smaller community in those days -- to show her the dirty, polluted waters off a path near the Syncrude plant, which had been dumping toxic waste into the territory.

"He showed this to me and said, 'This is what your mom and I are standing up against. But – it's going to be your fight.'"

He then took her up to Fort McKay, where she learned the traditional ways of living off the land: hunting, trapping, fishing, sleeping under the stars.

“That was the best week of my life,” she said. “I learned how to hunt, to trap, to live off the land, and it showed us what we were fighting to protect."

After working with Aboriginal youth in inner cities for a time, she came back to join the fight her parents began. In her case, this meant protecting the land from the destruction from the growing development of the tar sands.  She began researching Aboriginal treaty rights that could prevent further destruction of her traditional territory.

Moving from the margins

When Shell signed a contract with her people to develop two open-pit tar sands mines, for example, it was done under the condition that Shell would “provide measures to lessen impact of these mines on ACFN, including agreements to address environmental issues and mitigation. They also said they would contribute funds to build a youth lodge.”